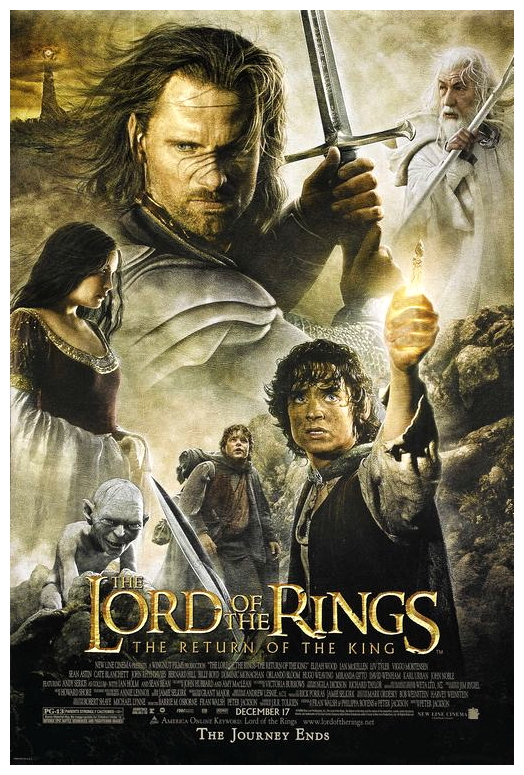 “The War of the Ring reaches its climax as the dark lord Sauron sets his sights on Minas Tirith, the capital of Gondor. The members of the fellowship in Rohan are warned of the impending attack when Pippin cannot resist looking into Saruman’s palantír and is briefly contacted by the dark lord. King Théoden is too proud to send his men to help without being asked, so Gandalf and Pippin ride to Minas Tirith to see that this request is sent. They meet opposition there from Denethor, steward of the city and father of Faramir and the late Boromir. Denethor’s family has acted as temporary guardians of Gondor for centuries until a member of the true line returns. This member is none other than Aragorn, who must overcome his own self-doubt before he can take on the role he was destined to fulfil. Meanwhile, Frodo and Sam continue to carry the One Ring towards Mordor, guided by Gollum. What they don’t know is that Gollum is leading them into a trap so that he can reclaim the Ring for himself. Though Sam suspects his deceit, Frodo is starting to be corrupted by the Ring’s power and the mistrust of Sam this causes is fully exploited by Gollum. The only way good can prevail in this contest is if the Ring is destroyed, an event that is becoming harder every minute for Frodo to achieve. The fate of every living creature in Middle Earth will be decided once and for all as the quest of the Ring-bearer reaches its climax.” (courtesy IMDB)

Released in three parts but filmed concurrently (with some additional shooting along the way), Peter Jackson‘s adaptation of J.R.R. Tolkien‘s saga of the land called Middle Earth was a massive undertaking, and a critical and commercial triumph. Using computerised special effects with great artistry, Jackson redefined the word ‘Epic’. Immersing himself in Tolkien’s richly imagined primordial world inhabited by hobbits, elves and other strange creatures, director Jackson exploits the natural wonder of his native New Zealand to full advantage and gets the details just right. However, he never lingers for long – there are too many mountains, rivers and valleys to traverse, armies to muster, and spells to cast. The narrative moves at a relentless pace as Frodo Baggins (Elijah Wood), a hobbit, is given a ring that gives its wearer great power. It’s too dangerous to keep so Frodo has to travel with his friend Sam (Sean Astin) to Mordor, the only place where the ring can be destroyed. 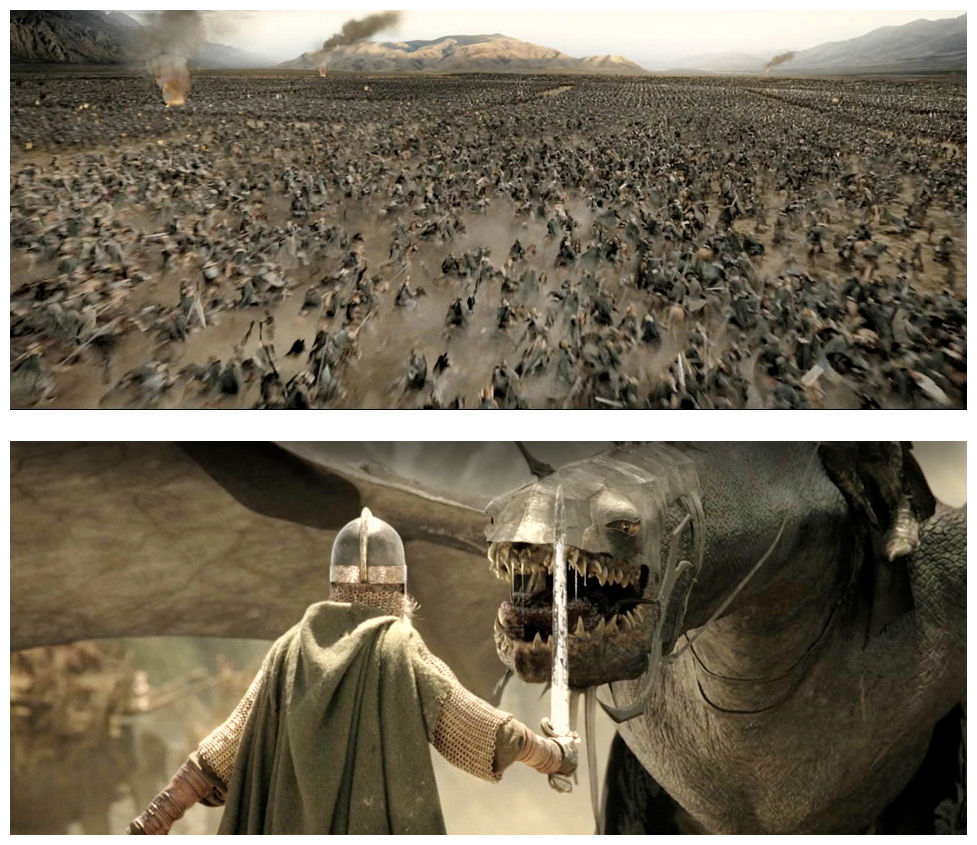 Seen by many as an anti-fascist allegory when published, the first part of the first film in the trilogy took on an unwelcome militaristic zeal when it was released during American campaigns in Afghanistan and Iraq yet, at its roots, it remains a tribute to the resourcefulness and courage of common men confronted with the evil lure of absolute power. In the grotesque schizophrenic swamp creature Gollum, Jackson and actor Andy Serkis created a compelling character, computer-generated yet imbued with humanity. Longer and even more spectacular than its predecessors, The Return Of The King (2003) concludes Jackson’s astonishing trilogy with enough thrilling battles, horrific set-pieces and poetic interludes for any ten movies. So sure is the director’s hand at this stage, so powerful and satisfying were the first two acts that he earns the luxury of finishing off his spectacle at a pace and tempo of his own choosing, running time be damned! 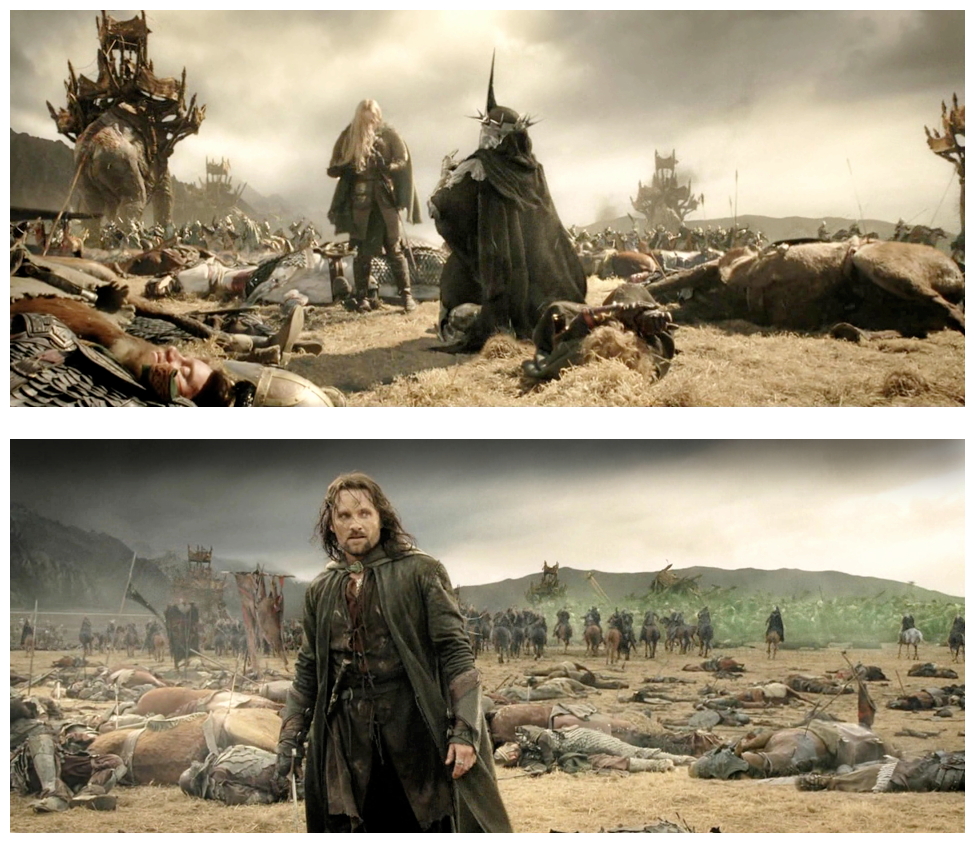 As Frodo and Sam draw closer to Mount Doom, Gollum’s treachery becomes more apparent, while Gandalf (Sir Ian McKellen) defends imperilled city Minas Tirith, defying its crazy caretaker Denethor (John Noble). Aragorn (Viggo Mortensen) embraces his royal heritage, calling upon a ghostly army to destroy the Uruk-Hai, while consummating his relationship with the elven princess Arwen (Liv Tyler). Ultimately, the One Ring is destroyed, Sauron is foiled, and peace comes to Middle Earth at last. With scenes like the battle of Minas Tirith, or Shelob’s venomous attack, or even the origin of Gollum, Jackson wows viewers with compelling characterisations and jaw-dropping action sequences, arguably the most impressive ever staged for a motion picture. New to the saga is John Noble as Denethor, the bitter caretaker of Minas Tirith who was originally strong enough to reject the evil influence of Sauron, but was made to believe that his defeat was inevitable and so fell into despair and depression. The apparent death of his son Faramir (David Wenham) is the last straw, making poor Denethor outright suicidal. As with many supporting players, Noble has an opportunity to express grief with Shakespearian eloquence as only a formally-trained actor of his stature can, becoming a sort of scowling ‘yin’ to King Théoden’s (Bernard Hill) clear-thinking ‘yang’. 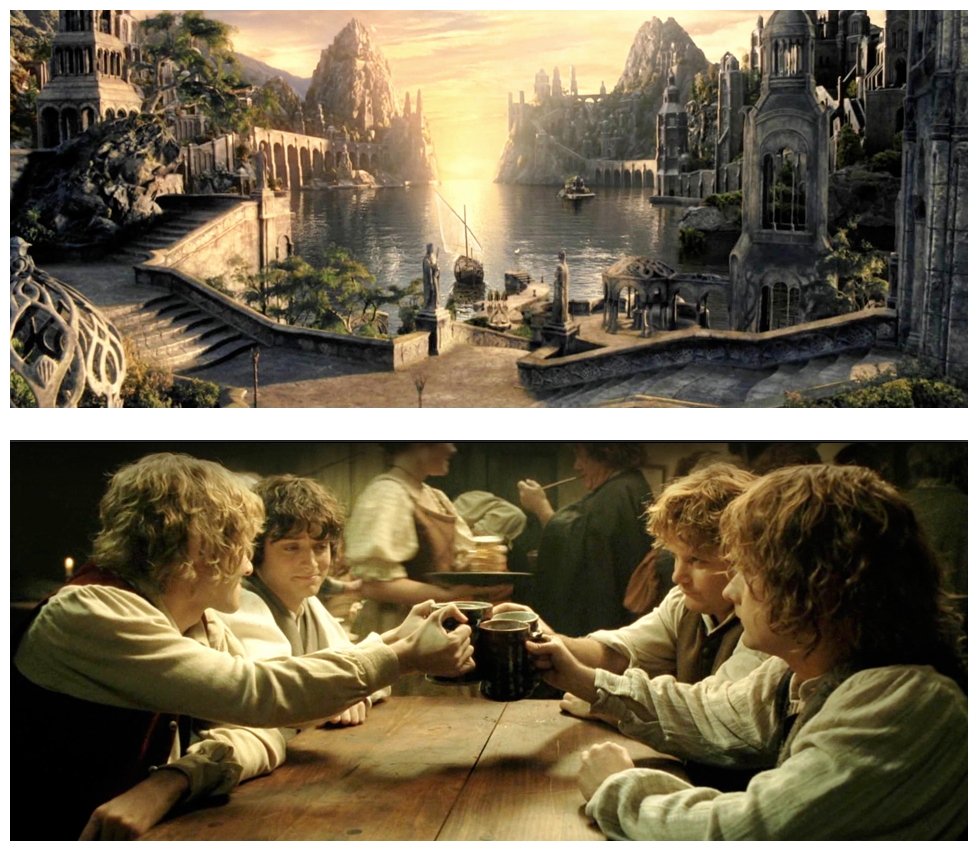 Gollum also comes into his own as a nefarious villain using trickery to separate the hobbits and steal the long-coveted Ring for himself. Of course, the movie’s title refers to ranger-turned-monarch Aragorn, who must take the sacred blade reforged by Elrond (Hugo Weaving) and use it to claim his destiny as Middle Earth’s new human ruler. This involves not only persuading an unpredictable phantom army to join in the fight against Sauron’s minions, but also spearheading a direct confrontation with the Dark Lord’s forces to divert their powerful enemy from Frodo’s actions at Mount Doom. Loyal to the end, a frazzled and emotionally-pummelled Sam proves himself not only a valuable friend, but also a more competent warrior in his fights with the giant spider Shelob and the Uruk-Hai, who have taken the comatose Frodo prisoner. 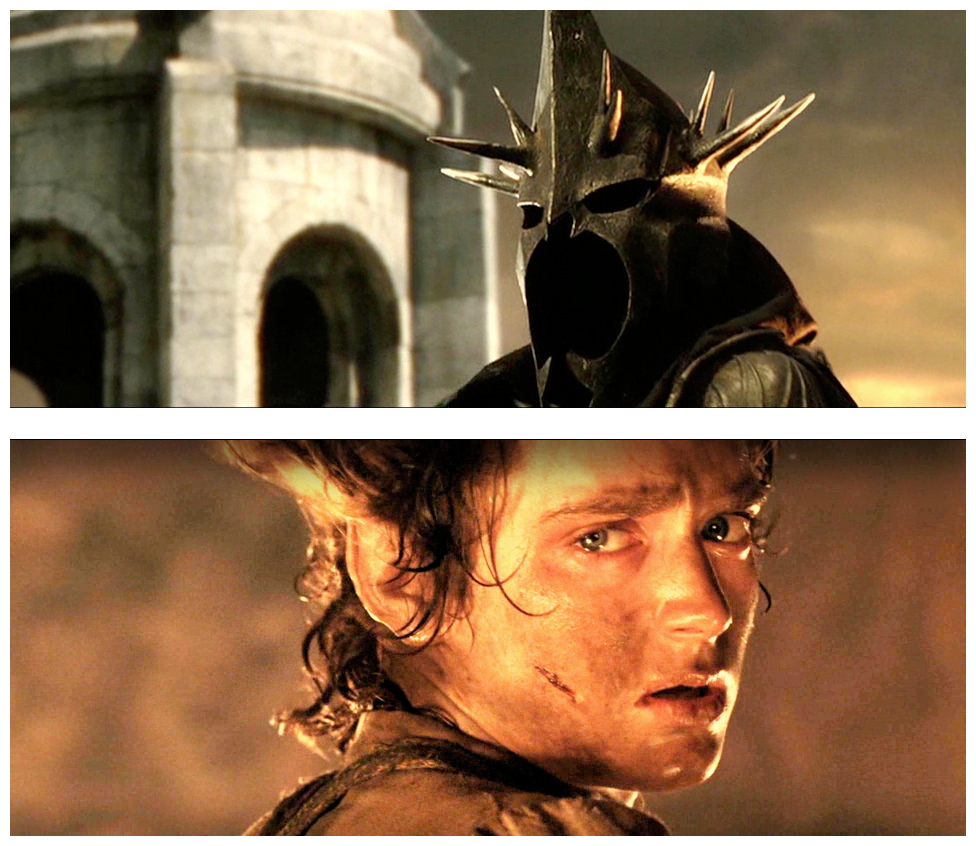 Still, this has always been young Frodo’s story, and the final stages of his taxing journey clarify the self-sacrificing hobbit’s noble intent (“This is my burden, Sam!”). A good life will go on in Middle Earth and in the Shire because of what he and his Fellowship companions have accomplished. Humans will soon dominate this war-ravaged world, with a wise leader and his loving new wife at the helm, as magical races and supernatural entities fade into legend. When Gandalf The White and Frodo bid farewell to beloved friends and enter their gleaming sunlit final reward, we know the grand adventure is finally over. Save for those last few pages in Frodo’s book, of course, left blank so that Sam can fill them in, which he does with the love of his wife and children, assuring Frodo Baggins the most heartfelt kind of immortality. 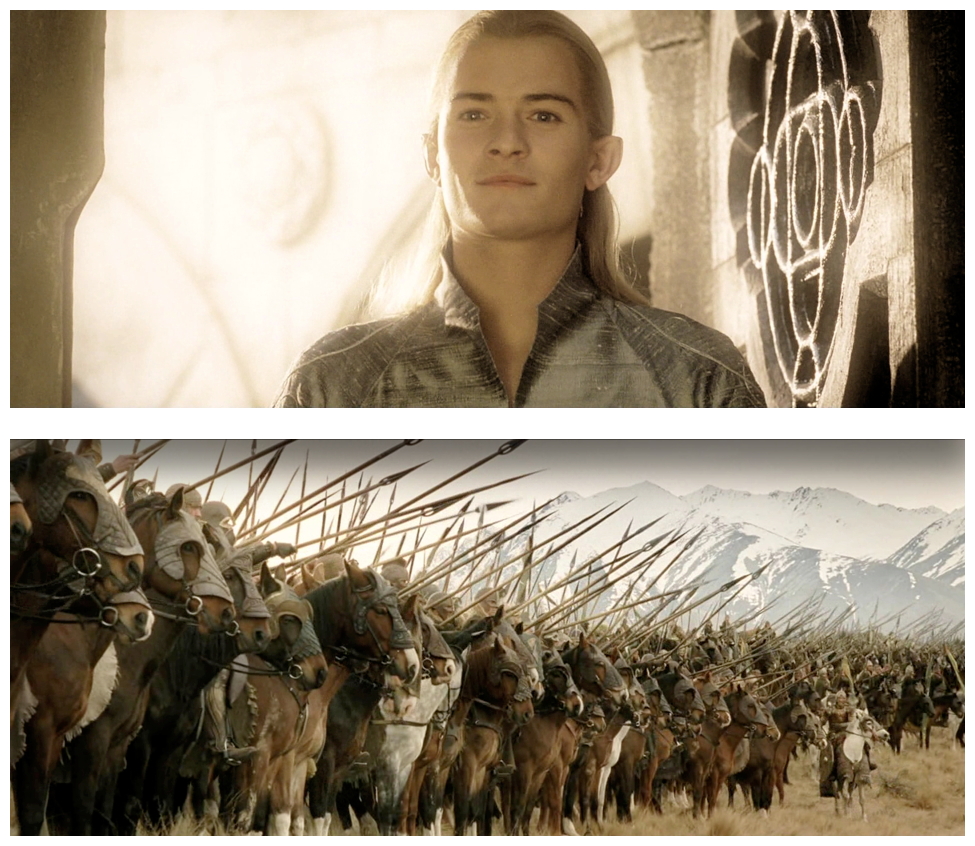 A four-and-a-half hour cut of the film was assembled by November 2002 (a gigantic job in itself – for instance, Théoden leading the charge goes for ninety seconds, edited down from almost three hours of footage) and a year’s worth of post-production started. Jackson reunited with longtime collaborator Jamie Selkirk to edit the final film. Like The Two Towers (2002), they would have to deal with multiple interweaving plots, and Jackson paid close attention to each individual storyline before deciding where to intercut. They spent three weeks working on just the last 45 minutes of the film, deleting scenes such as the Mouth Of Sauron (Bruce Spence), and the fates of characters like Éowyn, Faramir, Legolas (Orlando Bloom) and Gimli (John Rhys-Davies). Some scenes intended for the second part ended up being inserted into the third part, such as the reforging of the sword Narsil, the origin of Gollum and the disposal of Saruman (Christopher Lee), but the Saruman scene posed structural problems. 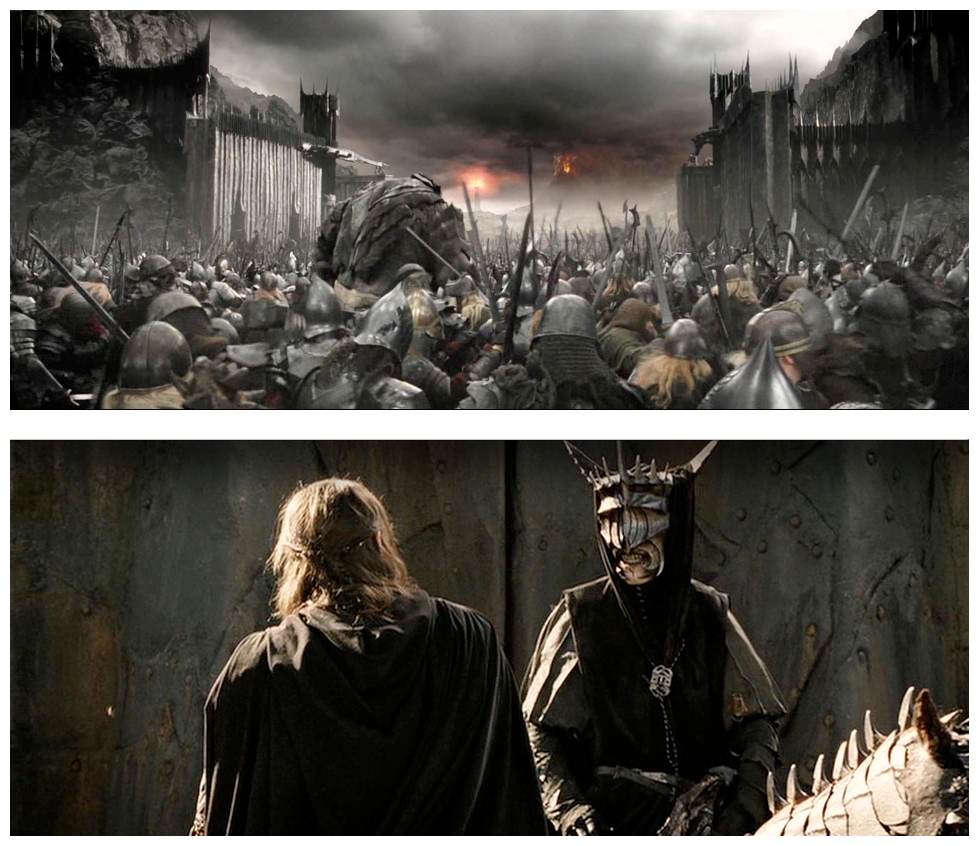 The sequence was removed, causing controversy with angry fans who even started a petition to restore the scene. Lee says he has no idea why the scene was deleted, but was nevertheless happy to be cast in The Hobbit (2012) prequels and contribute to all the DVDs. The Return Of The King has about 1,500 visual effects shots (three times more than the first film and twice that of the second). Alan Lee and Mark Lewis started compositing backgrounds, Gary Horsfield created a digital version of the Barad-dûr during his Christmas vacation, and Christian Rivers choreographed the enormous battle sequences with Jackson (60 planned effects shots quickly grew to 250 and 50,000 characters expanded to 200,000). Weta Digital went into overdrive producing a hundred shots a week, as well as dealing with last-minute additions such as horses, trolls and gigantic oliphants. 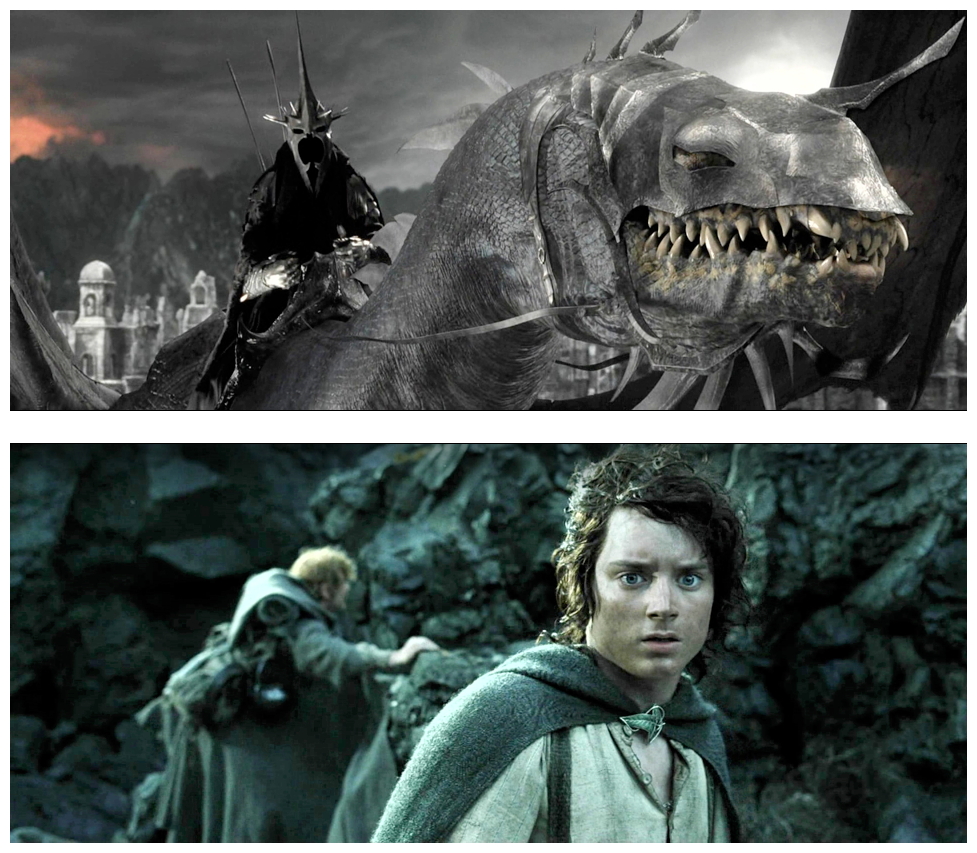 Like all the films in the franchise, there was also a great reliance on miniatures and practical effects as old as cinema itself, like the scene in which Denethor throws Pippin out of the tomb – actor John Noble throws a body-double down off-screen, and Billy Boyd‘s head immediately pops up on-screen to complete the illusion. A number of huge miniatures were built, such as Minas Tirith, which stood seven metres tall and 6.5 metres in diameter, and the collapsing city of the dead features more than 80,000 tiny individual skulls. The foley department spent the first half of the year collecting the best possible sounds to be adapted and synthesised (a Tasmanian devil was used for Shelob’s scream, a lion’s roar was used for the oliphants, a donkey screech for the fall of Sauron, broken glass for collapsing stones, etc.) and went to great lengths to attain just the right noises. For instance, construction workers were hired to lift and drop actual two-tonne stone blocks in order to capture the sound of catapulted rocks. 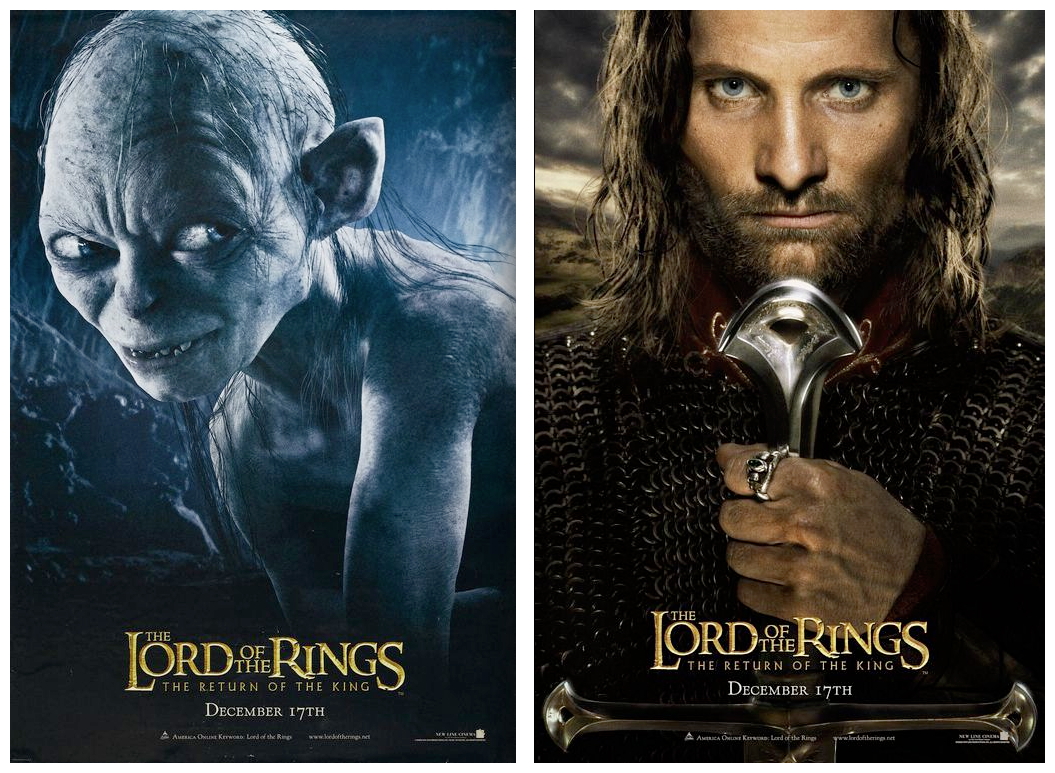 Composer Howard Shore had to write at least seven minutes of music every day in order to keep up with production, and actors Billy Boyd, Viggo Mortensen and Liv Tyler all contributed songs to the soundtrack. The end credits song Into The West performed by Annie Lennox was also composed by Shore with lyrics by screenwriter Fran Walsh. The Return Of The King was finally completed mid-November 2003 but, due to his hectic schedule, Jackson never had a chance to watch the finished product until he attended the Wellington premiere on the 1st of December. When asked after the movie what he thought, the master filmmaker quietly declared, “It’s pretty good.” His classical, romantic, gloriously non-ironic approach to races far nobler than our own distinguishes The Lord Of The Rings, arguably the finest fantasy film epic ever achieved. Many of the same characters and actors appear in the director’s second trilogy, a prequel to The Lord Of The Rings derived from Tolkien’s stand-alone novel The Hobbit, but that’s another story for another time. Right now I’ll bid you a fair fondue…I mean a fond farewell, and please join me again next week as we see what the postman leaves on my doorstep – and sets on fire – in Horror News! Toodles! 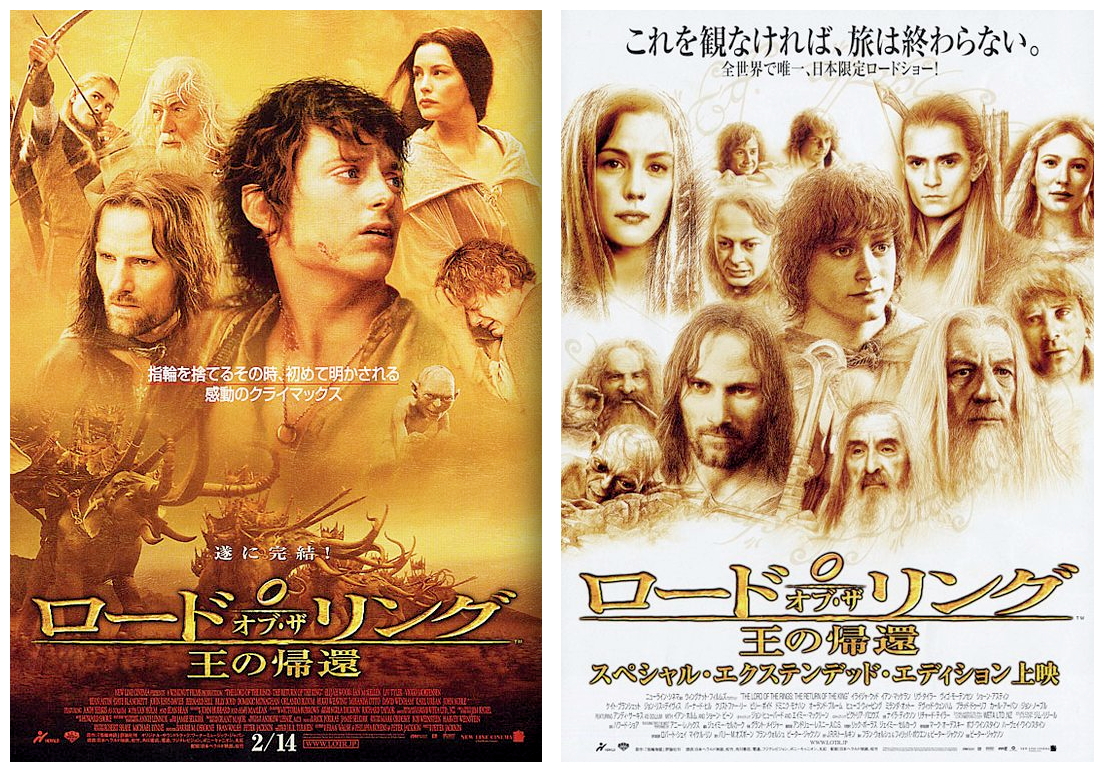