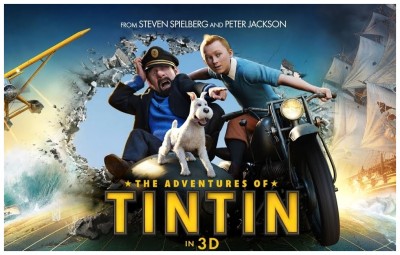 SYNOPSIS:
“Having bought a model ship, the Unicorn, for a pound off a market stall Tintin is initially puzzled that the sinister Mr. Sakharine should be so eager to buy it from him, resorting to murder and kidnapping Tintin – accompanied by his marvelous dog Snowy – to join him and his gang as they sail to Morocco on an old cargo ship. Sakharine has bribed the crew to revolt against the ship’s master, drunken Captain Haddock, but Tintin, Snowy and Haddock escape, arriving in Morocco at the court of a sheikh, who also has a model of the Unicorn. Haddock tells Tintin that over three hundred years earlier his ancestor Sir Francis Haddock was forced to scuttle the original Unicorn when attacked by a piratical forebear of Sakharine but he managed to save his treasure and provide clues to its location in three separate scrolls, all of which were secreted in models of the Unicorn. Tintin and Sakharine have one each and the villain intends to use the glass-shattering top Cs of operatic soprano the Milanese Nightingale to secure the third. With aid from bumbling Interpol agents the Thompson Twins our boy hero, his dog and the captain must prevent Sakharine from obtaining all three scrolls to fulfill the prophesy that only the last of the Haddocks can discover the treasure’s whereabouts.” (courtesy IMDB)

REVIEW:
Georges Remi came up with the character of Tintin, a young boy reporter in 1929 while working at a Belgian newspaper. Writing under his pen name, Hergé pioneered the new character in the story Tintin In The Land Of The Soviets. This comic was serialised in the newspaper and was an instant success – sales increased by an amazing 600% on the days the comic appeared. Hergé went on to pen a string of adventures of Tintin, sending his character to real locations such as the Belgian Congo, the United States, Egypt, India, China and the United Kingdom, and also to fictional countries of his own devising, such as the Latin American republic of San Theodoros and the East European kingdom of Syldavia.

There have been two animated television series, the first being produced in Belgium from 1958 to 1962, but the series suffered due to poor animation and differing too much from the original stories. The second series, on the other hand, was far better, co-produced by Ellipse and Nelvana animation studios in the early nineties. The stories and art adhered closely to the books to such an extent that some frames from the original albums were actually transposed directly to the screen. There have also been many live-action film adaptations, including The Crab With The Golden Claws (1947), Tintin And The Golden Fleece (1961), Tintin And The Blue Oranges (1964), Tintin And The Temple Of The Sun (1969), and Tintin And The Lake Of Sharks (1972).

Filmmaker Steven Spielberg didn’t discover Hergé’s adventures of Tintin until 1981 when he came across a review in a French magazine comparing Indiana Jones in The Raiders Of The Lost Ark (1981) to the intrepid young Belgian reporter. After picking up and reading one of the Tintin books, Spielberg contacted its creator Georges Remi, who sadly passed away before the two met in person, so it was Remi’s widow who granted Spielberg the movie rights. Meanwhile, in New Zealand, a young film fan by the name of Peter Jackson read with delight that a new live-action Tintin movie was going into development. In fact, Spielberg let the rights lapse but reacquired them about a decade ago and has since become friends with the Kiwi filmmaker, with the 3-D motion capture animation being a joint effort from the two masters of adventure fantasy storytelling.

The result, The Adventures Of Tintin (2011) subtitled The Secret Of The Unicorn, has been embraced by the Tintin fan-base, grossing more than $250 million in foreign markets since opening in Europe, proving the scrupulously-crafted movie has hit the mark with its toughest audience. Jackson unleashed his team of special effects wizards from his company Weta Digital to bring Hergé’s beautifully realised clear-line cartoons to life. The computer environment allowed them to design the world of Tintin in the same way that Hergé designed his. They were continually returning to the comics to ensure the colours and the palettes looked right, and to make sure it looked like it was in the Tintin world. 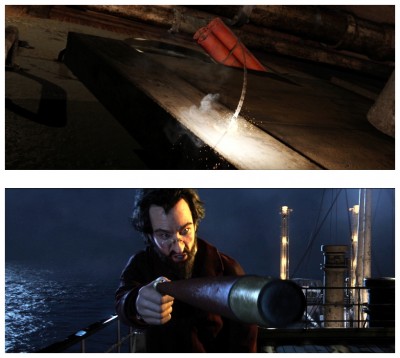 Spielberg put printouts of the panels from the comics up on the motion-capture studio walls and took long continuous shots to recreate them in the film frame. Every one of the panels in a Hergé book tells a story. Jackson would be the first to admit neither of the filmmakers are able to use computers: “I can hardly send an email, but we wanted to be able to walk into this sort of virtual world that we created with Tintin, with the characters, with the locations that had been built with the computer, to pick up a virtual camera and shoot a live action movie inside this strange hybrid photo-real world.” 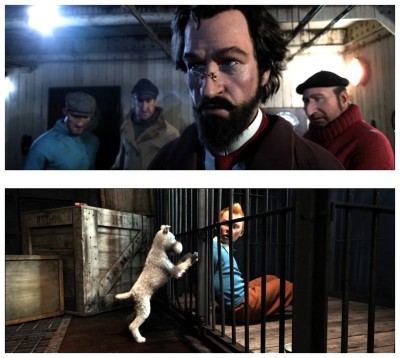 And this is exactly what they have achieved. From the moment young Tintin (Jamie Bell) finds a model ship in a market and resists the interference of a couple of suspicious strangers to discover the riddle hidden inside, we are plunged into a nonstop adventure to solve the mystery of the location of the hidden treasure from the ship known as The Unicorn. What Tintin doesn’t know is that the permanently pissed Captain Haddock (Andy Serkis) actually knows the answer but he needs to sober-up to remember. With the intrusive assistance from the bumbling detectives Thomson and Thompson (Simon Pegg and Nick Frost) and opera singer Bianca Castafiore (Kim Stengel), Tintin, Snowy and Haddock lay waste to the Middle Eastern town of Bagghar and leave a trail of wonderfully orchestrated mayhem in their wake. 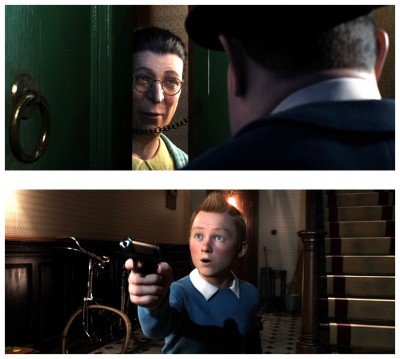 So, did Spielberg hold off making the movie until he could harness the technology to bring Tintin to the big screen? He’s not telling, but he did seem rather excited about being able to stick the camera in places he wouldn’t have been able to stick it in a live-action film, building a case for Tintin as an animated action hero for the 21st century. As for the future, the Spielberg-Jackson collaboration has been so successful the two are already talking about not one but two sequels, but that’ll be another story for another time. Right now I’ll quickly wrap up this article and politely request your company next week when I have the opportunity to tickle your fear-fancier again with another feather plucked from that cinematic ugly duckling known as…Horror News! Toodles! 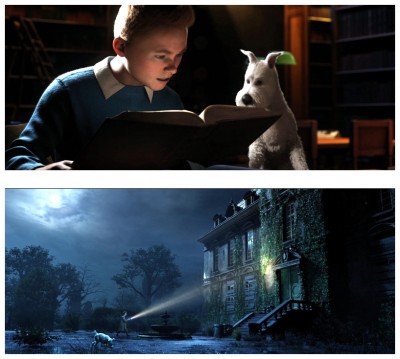