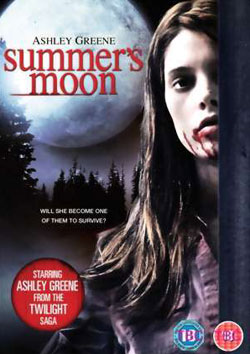 Summer has run away from home in search of the father she thought had died years ago. Armed with only a pistol and a picture of her father Summer heads to the small town that was his last known whereabouts. Little does Summer know that all small towns have their own secrets and help from the handsome stranger Tom leads her to learn some of the towns dirtier ones.

“He takes it personal when he loses one of his garden angels.”

Summer’s Moon or Summer’s Blood as its also known lets you know right from the start what the film is going to be about. A man’s voice speaks as we see the bloodstained body of a female victim; the man speaks about how important family is. He tells the corpse that she never would have ended up in the situation that she was in if she had just stayed with her family. Family is what the film is about, and Summer’s Moon doesn’t pull any stops into introducing the viewer to quite the dysfunctional one.

Summer’s Moon stars future Maxim cover girl Ashley Greene (you may also know her from the Twilight films) as Summer. When we first meet Summer she is hitch hiking on a country road finally someone pulls over to offer the pretty young thing a ride. As she gets into the car Summer informs the driver of where she is going and after exchanging some small talk the driver suggest that she should entertain him, rules of the road style. Summer isn’t one to take this lightly, just as soon as the words leave the drivers mouth she pulls out a small pistol and informs the man that he is simply her ride into the small town.

When Summer arrives into the small town it doesn’t take her very long to get noticed. While trying to shoplift at a local quick stop she runs into the sheriff, in a quick escape she runs out of the building in time to run into a local boy. The local boy sends the sheriff in one direction and then offers Summer a ride in his truck, assuring her that if she doesn’t go with him that it is only a matter of time before the sheriff returns. The small town boy introduces himself as Tom and genuinely comes off as a good guy I mean he even takes her out for a couple drinks.

While at the bar having a couple drinks Summer asks the typical questions one would ask when you enter a small town. Eventually as the evening winds down she asks if Tom knows where there are any cheap motels for her to rest for the night. Tom of course offers up his residence and after a slight flirtatious debate Summer agrees to go with him.

When the two arrive at Tom’s house Summer learns that he does in fact live with his mother, but Tom assures her that it is a big house and there is nothing to worry about. Summer knows exactly what she wants and it doesn’t take long until her and Tom are getting steamy in Tom’s bedroom. So steamy in fact that Tom’s mother stands by the doorway listening to their love making.

The next morning Summer wakes first and quietly makes her way down stairs. After snooping around and stealing a small bit of cash she gets ready to head out of the door when Tom suddenly cuts her off. Summer tries to talk her way past Tom but he isn’t having it in fact he doesn’t even look that scared when she pulls out her pistol yet again. Summer’s fight for an exit is ended rather quickly however when Tom’s mother slaps her in the back of the head with a pan knocking the poor girl out. Tom quickly opens his hand revealing to his mother the handful of bullets from the pistol.

Summer wakes up in a basement lying in a mound of fresh dirt. She can hear the sobs of someone else down there with her and soon she sees that yes there is another girl trapped in the basement with her. Great I thought to myself, yet another entry into the torture p*rn genre, was I ever wrong. Summer’s Moon quickly takes a different turn in where we learn that Tom actually keeps the girls down in the basement to help his garden grow. He refers to the girls as his “garden angels” and he even shows her the skull of one of these angels who unfortunately died from a brown recluse spider bite. Tom assures Summer that he would never hurt a woman, and for most of the film he does live up to that promise.

The film progresses and we learn that the other girl inside the basement with summer is actually a local girl named Amber. Tom’s mother isn’t very happy that Tom has kidnapped a local girl for his garden; he’s apparently been doing this for years without getting caught. Tom’s mother believes that the local girl will cause trouble, especially since her father Darwin has recently gotten released from prison.

Darwin was the town drunk for many years and his daughter Amber was known to drift from guy to guy so even the sheriff takes it lightly when Darwin informs him that his daughter is missing. Darwin’s search for his daughter becomes an interesting side plot that meets its end near the end of the film, but it keeps the viewer entertained between the scenes of Summer and Tom.

Tom and Summer begin to develop somewhat of a relationship; Tom is obviously kept in control though. When Amber accidentally falls to her death Tom finally starts showing a bit of his dark side mainly in the frustration that one of his “angels” has died. Eventually Summer does earn some of Tom’s trust and she is allowed to walk around the house so long as he is home, when he isn’t she is once again chained down in the basement.

While going through Summer’s belongings Tom finds something that interests him very much. He finds a letter from Summer’s father and an old photograph which he quickly shows his mother. The woman smiles wickedly and makes a quick phone call. Little did Summer know she is going to meet her father sooner than she expected; and little did she realize just what kind of dysfunctional family she really belongs to.

Lee DeMarbre’s Summer’s Moon is a great little genre flick that has a very old school vibe to it. Having Ashley Greene in the cast certainly doesn’t hurt the film due to her popularity with the Twilight saga. Ashley’s performance as the tough as nails Summer really is what sells the film though. No matter what tortures Tom and his mother put the girl through she still keeps her chin up and tries to stay ahead of the game in order to make her escape, she fails several times and twice she causes the death of an innocent person in her failure. Peter Mooney also does a fantastic job as Tom, he comes across as a good old boy but when he snaps he really goes off of the deep end. The real scene stealer in the film though is Stephen McHattie as Gant, Tom’s estranged and recently returned father. Gant is a very dangerous man and McHattie pulls the role off very believably.

As far as the gore and the FX go there isn’t a whole lot, when its there though it is thrown in the viewers face. A few characters are shot, one ending in a wonderful spray of blood across Summer’s face. Most of the characters who meet their demise in Summer’s Moon do so by the edge of a knife. There isn’t a very high body count, but it’s not what you see that is scary about this film. The scary thing about Summer’s Moon is just how dysfunctional Tom’s family is, and for how long the events have been going on. Lee DeMarbre really does set up the tension in the mood in the film and the superb cast really does sell the film.

In an age where kidnappings are common place and the fear of many parents across America Summer’s Moon is sure to strike a cord and though I’m sure it won’t be the title to make Ashley Greene a star, it will certainly help cement her into future scream queen status.