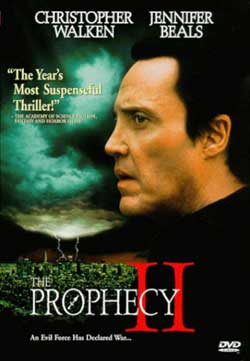 Gabriel returns to try to destroy the human race he despises so much, with the help of a suicidal teen and the opposition of the angel Daniel.

Prophecy 2..and the gangs all here! Ok, well not quite. Christopher Walken reprises his role as Gabriel which is great to see and would be a showstopper if not. The cast is certainly pretty rich with new faces to the franchise this round such as Jennifer Beals who plays lead Valerie Rosales. Other familiar names include: Brittany Murphy, Eric Roberts, and Glenn Danzig.

Though what might throw folks off is a few new actors playing roles that previous actors played in the first. In any case, when you start dealing with angels….and all their different names I get confused myself. Better though to approach this as a reboot.

Lucifer brought Gabriel into hell, but realized that having Gabriel there was too much to handle. Lucifer…as he says – believes that hell is not big enough for the both of them. And so Gabriel is released from the fires and brought back to earth.

Now, the angels have plans. They figure if one of them impregnates a mortal woman – it will give them domination. Or at least the one born from a angel / mortal union. In traditional lore this is known as a nephilim. Gabriel is pretty selfish and wants earth for himself….or to destroy it for that matter. As in the first movie, Gabriel simply wants power and domination over god’s creatures. He is willing to do so by disobeying God, and bringing earth into an ash filled apocalypse.

Danyael, another angel is off killing angels who support Gabriel’s cause. A quick beating and heart ripping seems to do the trick with these black-eyed entities. So here is where Brittany Murphy comes in as the recently suicide-engager Izzy. Gabriel likes to recruit lost souls, in this case Izzy is fresh enough to get recruited. She has to do Gabriel’s bidding, but prefers death. Gabriel needs some help dealing with the modern world. Namely, cars, computers and all those magnificent electronic devices.

Valerie Rosales (Jennifer Beals) is targeted and seduced by Danyael. And so the seed of a nephilim is planted.

The sequel to its original follows in the tradition of the war in heaven theme. I think generally viewers take interest in this apocalyptic battle if for entertainment reasons or for pure interest in immortals doing battle. As much as I engage into these themes, I never quite lose interest in how the potential scenarios are played out. My favorite to date has to be the Supernatural TV series….though you cant top Christopher Walken as a dark angel either. Something about his offbeat accent makes for a humorous experience at times. I kept saying to myself, gangster style Walken is not really the voice of gods chosen that I would have envisioned. Though somehow, we accept it and move on.

The 3rd act seems to feel a bit of a letdown with Eden being an industrial park, and the angels duking it out in the rafters. There is a subtly message of faith, belief and gods plan which is promoted by Eric Roberts as the soft spoken Michael. I won’t spoil the ending, but I will say it is a fitting punishment.

The sequel to “The Prophecy” is worthy but fails to live up to the first movie. I believe maybe a tight budget and some faulty ideas probably effected the production in the end. In any case, I think it’s still worth watching to see how it all plays out. Oh ya, there is a part 3! We will be reviewing that soon!

Read our review of “The Prophecy”