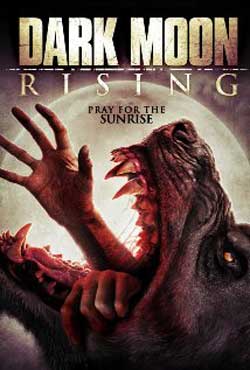 A group of werewolves cause death and destruction in a small town as they search for a young woman who has the power to destroy them all.

I love werewolves and think that they have pretty much gotten the shaft over the last couple of years. If you ask me the last really good werewolf movie to come along was Ginger Snaps back in 2000 and there hasn’t really been a decent one since (Dog Soldiers was decent, but it just wasn’t as good as I’d hoped it would be). I always try to be optimistic when a new werewolf flick hits the scene, but all too often I am pretty let down by it and end up being utterly disappointed after checking it out. I was pretty excited to see Dark Moon Rising as I thought that it might just be something special, but sadly I realized about five minutes into it that I was wrong. I really, really wanted to like it but thanks to the boring premise (that was all over the place), horrible acting, and atrocious special effects I just couldn’t do it. I thought that it was a convoluted mess of a film that didn’t know exactly what it was supposed to be and when everything was said and done I felt like I wasted my time watching it.

Without a doubt the film’s biggest flaw is its premise. It is a mix between Twilight and The Lost Boys with a little bit of X-Men thrown in for good measure. The plot is a little hard to follow at times (thanks mostly in part to the horrible editing) and I spent most of the time that I was watching it trying to figure out just what the hell was going on. I thought that it was more than a little confusing and it seemed to me that writer/director Justin Price didn’t know himself what he wanted to do with the film. Is it a horror film? An action/adventure flick? A love story? I really have no clue and I don’t think that anyone involved with it really quite knew either. It’s a shame really, because had this film been handled the right way it could have been a very fun little flick about werewolves invading a little town and killing the hell out of everyone that they came across instead of how it turned out. 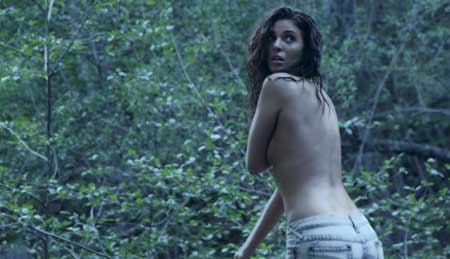 I also thought that the acting was pretty bad from everyone involved. The only one that almost does a decent job is Stasi Esper, who plays Dawn (and she is nothing to write home about). The biggest majority of the acting is downright terrible and even Eric Roberts-who pops up for about five minutes or so-does a pretty piss poor job. In fact, I think he should probably be ashamed of himself his performance is so bad this time around (what was up with that horrible accent he is using?) and it is obvious that he was only a part of this film because he was making some quick cash (I guess he had a car payment to make or something and needed some money). I usually dig the parts that he plays and ordinarily he is on it, but he definitely phoned it in this time and looked as though he wanted to just be somewhere else. Without a doubt though, the worst actor in the film was Matthew Simmons.

Simmons plays this annoying werewolf character named Gecko (Gecko!?!? Yeah, I don’t know either) and is just laughably bad. I think that he thinks that he is Wolverine or something (hell, he has the same hair and everything) and he just stinks up the screen every single time he is on it. From his poor attempt to play a badass to the ridiculous voice he uses there is nothing good about his performance and I actually couldn’t help but feel a little bad for him. I don’t know if he is just really that bad of an actor or if his lines were just that poorly written (which is probably the case) but he definitely gives the weakest performance of the movie (which is saying a lot). If you are looking for likable characters and top-notch acting you’ve come to the wrong place.

I also feel that I have to mention how terrible the special effects were as well. I know that this was a low budget film and that the people behind it probably didn’t have a whole lot of money to spend while making it, but come on! The CGI effects are some of the worst that I have seen in a long time and I wonder why they didn’t use more practical effects as I am sure that they would have looked a lot better in the long run. At times it felt like I was watching cut scenes from a video game or something and they only got progressively worse as the movie went on. The werewolves look terrible, the transformation scenes are beyond awful, and if you ask me there is absolutely no excuse to use CGI blood under any circumstance as it is fairly cheap and easy to make your own blood using food coloring and a bottle of Karo syrup. I’ve seen a lot of really bad CGI in my day but the ones that are used in this film really take the cake.

I wasn’t impressed with Dark Moon Rising as you can probably tell. Before I watched it I looked it up on IMDB and saw that it had a ton of positive reviews as well as a ranking of 8.8 overall. It is apparent to me that the people that wrote these reviews and gave it such a high ranking were all either involved with the production or friends of people who worked on the film because it is just an all around lousy film in a lot of ways. Skip it unless it sounds like something that you would be into, but trust me when I say that it really isn’t worth your time.