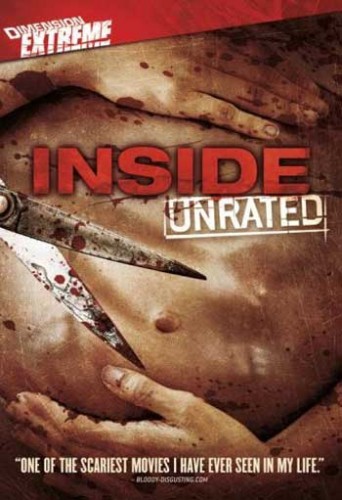 Four months after her husband’s tragic death, Sarah (Alysson Paradis) prepares to head to the hospital to deliver her miracle baby. But what should be a blessed Christmas Eve event turns terrifying when a crazed woman (Béatrice Dalle) arrives at her home intent on taking Sarah’s baby. Taking up whatever sharp implement at hand, the psychotic woman relentlessly pursues the pregnant Sarah, determined to perform a grisly brand of C-section.

I’m not going to go on a profanity laced rant over how mainstream horror films are ruining the genre, only to segue into a review of another foreign film that once again makes your favorite Hollywood horror remake look like Bring It On. I’m not going to bitch about how much I hate so and so as a director, or how torture p*rn is an affront to my sensibilities and intelligence. No. I’m tired of this, and I’m sure everyone else is as well. Instead, I am going to simply say this: À L’Intérieur is an amazing film, and no self-respecting horror fan should go without seeing it.

Directed by newcomers Alexandre Bustillo and Julien Maury (Bustillo wrote the screenplay), the story is genuinely original yet flirts on standard horror tropes. A young woman named Sarah loses her husband in a violent head-on collision, and all that she has left is her unborn baby, a scarred face, and her job as a photographer. Four months after the accident and still grieving, she is visited at her home on Christmas Eve by a shadowy woman who will stop at nothing to acquire Sarah’s unborn child. And I mean nothing. The introduction of the unknown woman sets into a motion a film that is, simply put, a complete onslaught on the senses. It is one of the most brutally violent, disturbing, and utterly gut-wrenching horror films I think I have ever seen. The movie was an eighty-eight minute long crescendo of soul-crushing violence and bloodshed weaved around a story of desperation that makes you feel like you just watched the crucifixion. 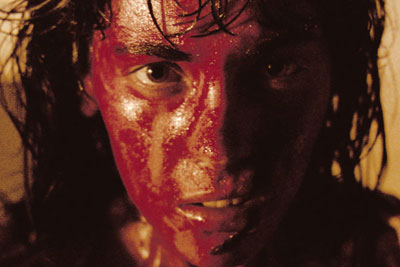 Some, however, might be quick to point out that the excessive violence and bloodshed would require this film to fall under the umbrella of torture p*rn. This would be a mistake, and what I could only consider a monumental insult to the filmmakers who no doubt poured their heart and soul into making a movie truly deserving the moniker of horror. Aside from scenes of explicit torture being completely absent, films that are often referred to as torture p*rn lack the masterful storytelling and raw emotion that are required to make a horror film truly effective, and À L’Intérieur presented all of this in a manner that would make its absence a detriment to the film and the impact it has on the viewer.

One of the aspects of this film that sets it apart from the gore-infested tripe we normally see is the characters. Throughout the film Sarah, portrayed by Alysson Paradis (who is apparently Johnny Depp’s sister-in-law), displays alternating bouts of intensity and capitulation, giving to the character a sense of realism not often seen in horror films of this caliber. The interspersing of scenes in utero display the motivator for surviving the horrendous ordeal – the baby might seemingly represent the last vestiges of a life taken from her four months prior – while at the same time showing her to be a woman who at times has simply reached the threshold of what an ordinary human can handle. 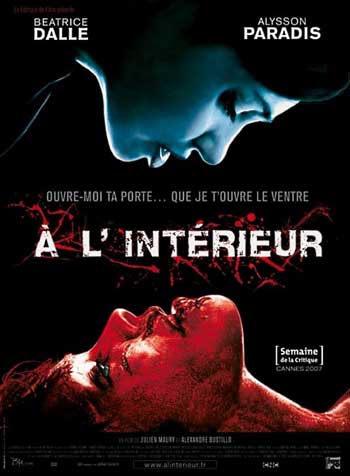 This is all juxtaposed by the alternating bouts of utter rage and placid determination displayed by the unnamed intruder, la femme, who will stop at absolutely nothing to make Sarah’s unborn child her own. In contrast to this, a beautiful dichotomy is seen in the characters’ contrasted appearance: Sarah wearing a white evening gown, and la femme wearing a long black dress and a corset throughout the film (an interview with the directors revealed they were inspired by Pinhead and Michael Myers in the look they chose for her). Visually the film is stunning. It’s dark and brooding atmosphere, accentuated by the genuinely disturbing performance by Beatrice Dalle, is offset only by the red hue given off by the impressive and stunning deluge of blood (quite literally at one point) that pervades the latter half of the film. The soundtrack is impressive, alternating a string arrangement with a cacophony of noises to heighten the mood of the scene, though at times I did feel that it was inappropriate, and seemed to be more of a hindrance to the overall effectiveness of the scene that a benefit.

No film is truly perfect, and À L’Intérieur suffers from a few issues that I feel don’t necessarily detract from the overall impact of the film, but are prominent enough to where they make the viewer scratch their head or roll their eyes. A scene involving a little bit of CGI made me cringe over how fake it looked, and toward the end logic gave way to absurdity in a scene that was quite possibly one of the most brutal in the film.

One reviewer, in what featured quite possibly the greatest number of instances in which the word “%$%*@” was used to review one movie, cited the supposedly incredible absence of all logic throughout the course of the film (why did Sarah not scream for the cops? – note: maybe she was in a state of shock? scared sh*tless? who knows?). While I agree with most of the points he attempts to make, I myself attempted to reason away some of them in the comments section. 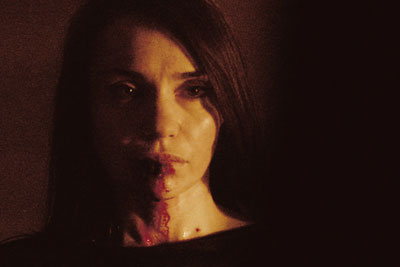 À L’Intérieur has been making the rounds on festival circuits and pulling in tremendous amounts of praise, being hailed as one of the best horror movies in recent memory. Alysson Paradis and Beatrice Dalle won the Carnet Jove Jury Award at the Sitges – Catalonian International Film Festival, a true testament to their phenomenal performances. The film was picked up by Dimension Extreme for a stateside release, and has since become a favorite among horror fans everywhere. From À L’Intérieur to Frontieres to the upcoming Martyrs, the French seem to have a stranglehold on the genre, and there seem to be no sign of letting go.