In this brutal, bloody shocker that’s invited comparison to The Texas Chainsaw Massacre and Straw Dogs, struggling singer Marc Stevens (Laurent Lucas) is working the wedding circuit in Belgium when his car breaks down in the sticks. He’s taken in by a kindly innkeeper (Jackie Berroyer) who, at first, seems eager to please but later reveals himself to be a psychopath. Fabrice du Welz directs this haunting thriller with a tinge of dark humor.

Calvaire is about a low level singer/performer, Marc (Lucas), on the fringe of the entertainment business in France. When we first meet Marc he is doing a show at an old age home. He croons and sways to his adoring audience in a cape right out of Liberace’s closet. The senior women in the home are clearly captivated by Marc, like a French Tom Jones. He finishes his performance to a round of applause. He goes back to gather himself and pack up his things, when one of the elderly women comes backstage to talk to Marc. They talk in a very familiar way letting you know Marc’s a regular at this place. The woman makes a request of let’s just say the sexual natural before he leaves to go to another performance far away for Christmas. Marc repels and woman embarrassed runs off. Marc continues to pack up and as he goes to his van and runs into a nurse at the home that gives him an envelop and wants to wish him goodbye. She too gets very touchy-feely, he turns her down, and leaves. It seems the guy can’t walk a foot without some women wanting to jump his bones (God, I know the feeling… No, no I don’t, sorry). 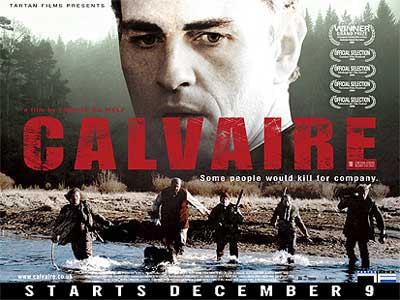 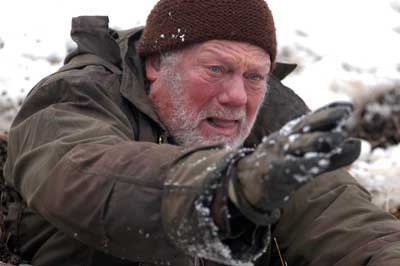 Of course, Marc hits a bit of an off road on his way to him next gig. And of course, his van breaks down in the middle of a rainy trail. This is where he runs into what seems to be a trend in French horror genre, the backwoods possibly inbred, possibly retarded, definitely strange teenage boy. Boris (Coucherd) is walking in the rain looking for his puppy, Bella. Marc ask Boris if there’s a place around where he can stay. With a bit of apprehension, Boris takes Marc to this empty inn run by an old, unassuming inn keeper, Bartel (Berroyer). He offers Marc a room for the night and Marc agrees. When he wakes up he sees Bartel towing his van in. Bartel warms to Marc once he finds out he’s an entertainer because Bartel use to be himself a entertainer, comedian to be exact. Bartel calls the local mechanic and is told the van can’t be looked at til the next day. But, Bartel offers to check on it for him. Marc agrees and decides he’s gonna take a brisk walk around the surrounding to burn some time. Bartel warns him under no circumstances should he go to the “village”.

Marc agrees and goes on his walk. Now, if our Marc had spent more time watching horror movies and less time bedazzling his cape, he’d know if someone tells you stay away a village and stumbles upon quite a scene. He sees through a crack in a barn a group partaking in, well… pig screwing, that’s right. You see France isn’t all berets and lax hygiene. No, no it’s also imbredding and bestiality. And from there things start to get really interesting. 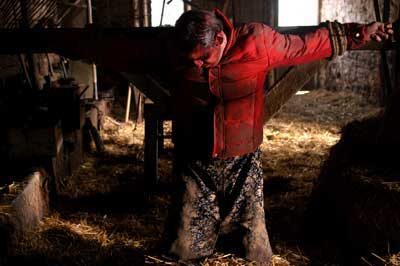 Calvaire succeeds on a number of fronts. First the camera work is great the panning in and out, the use of odd camera angles, and sweeping shots all achieve the goal of laying out this isolated forest of horrors. The acting is very well done, I have to imagine making this type of material come off genuine and honest must be one hell of a task. But, regardless I bought these actors conveying various states of emotions. Marc plays the sympathetic victim well, kind of in the vine of Sally in “Texas Chainsaw Massacre”. Just that slow unraveling into madness. Jackie Berroyer who plays “Bartel” also gives a great performance. He succeeds in making you pity his lonely existence at the same time disturbing you with his true motives. 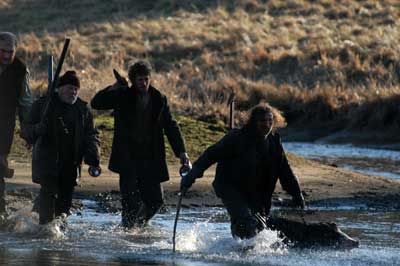 There are genuine scenes that are off putting without the use of blood and guts. For example, Bartel is driving past a group of seven or eight children all dressed in red rain coats. Who are they, where are their parents, are they all related, and what kind of discount can you score on eight raincoats? It’s never explained, it’s so random that it’s clearly put in there to f*ck with you. Then there’s the dance sequence inside the bar. It’s just so goddamn bizarre it congers up memories of Buffalo Bill lighting the world on fire with his tuck and jive in “Silence of the Lambs”. 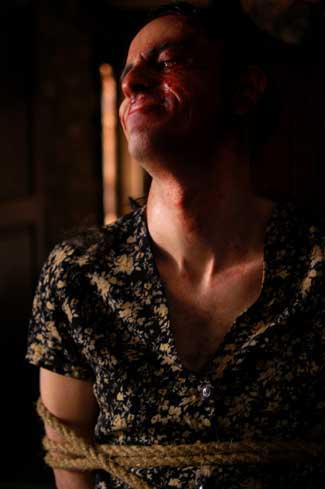 Now, let me warn you this film is an acquired taste for any American mainstream horror fans. Your not gonna get your conventional build, set up, and payoff. It is slow and can be very plotting. And those major creep moments are few and far in between. So few that in some ways it might not justify the time your gonna put into the film. If this is your first foreign film (one, god help you), you will have to forget all you’ve been programmed to expect in your standard horror films. 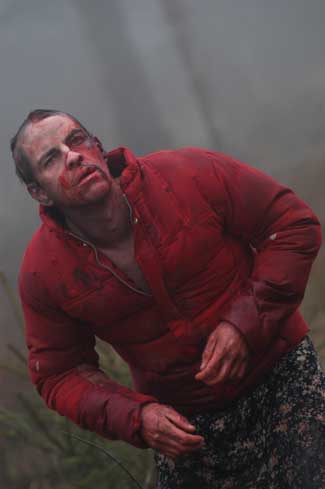 Calvaire is a horror film that centers around awkward and bizarre moments of tension. Not really meant to scare but to disturb and make uncomfortable. It’s not a fun, enjoyable ride. You will appreciate the development of a tone and atmosphere that seems truly unpredictable. I’m sure there are aspects, almost red herrings that will get glossed over by American sensibilities. It’s not obligated to appeal to our understanding of horror. So you should walk into Calvaire with an open mind. Although, lots of the insanity in the film is very universal and is effective regardless of any differences. This isn’t the film that’s gonna convert a person who has stayed away from foreign films. But, it you have a board sense of what makes up a horror film and appreciate the technical aspects of film, give this a view.