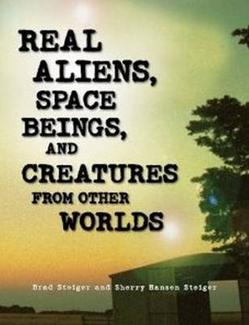 You’ve read the stories, seen the tv shows and heard the rumors, though it never seems to be enough. Are aliens invading, have they already or is our historical understanding all an elaborate cover up that the powers don’t want us knowing? Yunno, I cant help but think that as fantastical and fictitious as X-files presented itself, it may have been based on truth rather than the inner workings of creative minds. Well, as the Steigers bring us another tasty entry into the alien hall of fame, there is plenty here for everybody to pick from.

In fact, what I liked best about the book is that it’s not your usual lethargic drawn out page turner but rather short reports and quips from a variety of places and sources that give us alot in little bits. My first impression was how easy I found it to just flip forward or back to the desired sections of interest. Whether it’s the grays, the lizard folk, the greens, the hybrids or just strange places both on and off earth….your sure to find some satisfaction in your exploration here.

I tend to gravitate to the cover-ups and the “what’s-been-going-on” reports that focus on government involvement and the “come-forward-witnesses” needing to get things off their chests. As we move past these strange and wild tales of presumed non-fiction, we learn about a race or “races” who by careful collaboration have kept the secrets of the worlds from us. If this is true and very well could be, what are we being protected from?…and why?

Are we to believe in TV-like stories that sound much like the stuff we watch for relaxation………maybe so. The Steigers and friends don’t mess around. They have spent the time it needs to bring forward these isolated incidents large or small. While some of the chapters focus more on the beings themselves other tackle the bigger picture announcements. The kind that are looming overhead!

“Real Aliens, Space Beings” tackles a number of short reports on secret lairs, sightings and abduction stories that all point to some level of interaction or proof of alien life forms. What is more disturbing is the government level involvement hinted at revealed as going on for quite some time. We’ll read about ties to the lost Atlantis, about underground bases, about levels deep, about sectors dedicated to experimentation and several more unexplained reportings that span back into the 40’s and 60’s.

Is 2012 the year that we make contact? Has the aliens been guiding our hands in the evolution chain or are we all just some form of an elaborate experiment that has come almost full circle? The facts are too intriguing not to raise a few eyebrows and wonder if the time has come for full revelation. The Steigers do a bang up job on not only presenting the short tidbits, but doing so in a way that seem to draw reader interest from page to page. I think this fact alone keeps me coming back to these books and flipping thru.. It sure is alot to consume but don’t say they never told us so….. killer stuff for UFO fans and unexplained materials alike.