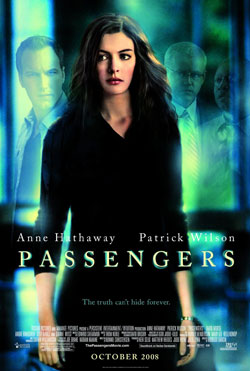 After a plane crash, a young therapist, Claire, is assigned by her mentor to counsel the flight’s five survivors. When they share their recollections of the incident — which some say include an explosion that the airline claims never happened — Claire is intrigued by Eric, the most secretive of the passengers. Just as Claire’s professional relationship with Eric — despite her better judgment — blossoms into a romance, the survivors begin to disappear mysteriously, one by one. Claire suspects that Eric may hold all the answers and becomes determined to uncover the truth, no matter the consequences.

Promoted as a horror/thriller, Passengers is really a thriller at best. The horror is subtle in the sense that “The Sixth Sense” is. Though it still stands as a strong supernatural story with twists, great flow and a keep-you-glued-till the end type of resolve.

Passengers stars the lovely Anne Hathaway as Claire Summers. The film is directed by Rodrigo García and is nice film that keeps you in suspense up until the very end. The tagline “The Truth Can’t Hide Forever” suggest an x-filey type of ride and in many cases could actually be swapped out for one. Though this is a strength rather than a weakness.

Claire, a grief counselor finds herself assigned to a recent case involving the survivors of a brutal plane crash. Apparently the plane lost control and everyone died with the exception of the flights 5 remaining survivors. Her job is to investigate the case based on the survivors tales and work them through there experiences and after crash grief. 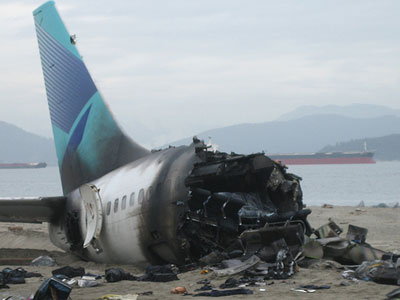 It just so happens, it turns out to not be a simple issue of just a plane crash which fuels a more investigative approach. Claire hand picked for her extensive background, sets up a weekly meeting with the survivors to help them though there emotional issues. 1 of the survivors Eric (Patrick Wilson) passes on the group meet but invites her for a more formal house call. Reluctant she takes him up on his offer being charming and somewhat obvious to his attraction to her. This begins a quick friendship and eventually a heated love interest. Much of the film is based around this love drama though its is broken up with the circumstance surrounding the case.

A pretty suspicious airline representative named Arkin played by David Morse only raises curiosity rather than brushing it under and Claire is determined to get answers. As the film progresses it becomes stranger that the survivors keep disaappearing 1 at a time without reason. Background figures lurk, strangers observe, and the plane crash becomes more and more likely to be originated from devious of faulty issue with the plane. A few more encounters with outside informants points to a possible defect with the planes engine and suggest a more larger cover up taking place. 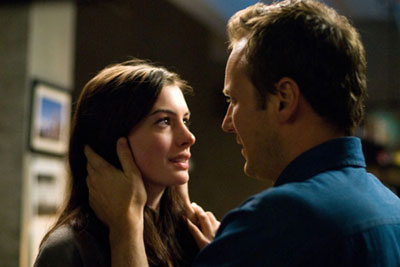 Claire in the meantime explores her relationship with Eric even with a sense of concern over his sometimes strange behaviors. While he seems accommodating, there is a look of fear and confusion often seen in his eyes. Claire however focuses more on the grievance issues rather that seeing it for what it really is.

William B. Davis makes a quick cameo on screen that really only last for 1 scene. Other great performances are given by Clea DuVall, Andre Braugher and Dianne Wiest.

I wont spoil the resolve as that’s the fun of this film. Though you get the sense as things move along that all is coming to a close in a most unusual way. The pacing is well executed and the Anne Hathaway steals the show with a bright smile and a loveable personality.  Horror fans might lose interest in the love drama that plays out, though its a quality film with a good plot that I could group in with films like “White Noise”, “The Jacket”, “Mothman Prophecies” and “The Forgotten” 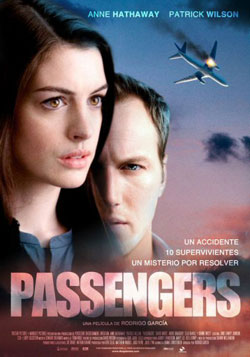 I think this is the line of films that most couples would enjoy and it doesn’t provide horror elements that threaten, unnerve or turn off. Again keep in mind, that the horror end is real subtle but this makes for an excellent thriller. I see Block Buster rental written all over this one that will be more popular with the mass consumers than horror seekers. A fine film that deserves a good watch!