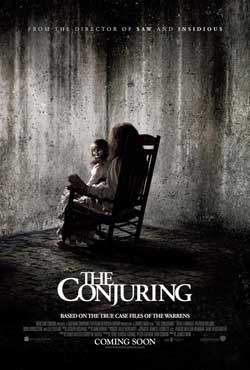 Paranormal investigators Ed and Lorraine Warren work to help a family terrorized by a dark presence in their farmhouse. Forced to confront a powerful entity, the Warrens find themselves caught in the most terrifying case of their lives.

James Wan has come a long way from “Saw” (2004), a long way indeed. Although he’s already established himself as a true master of the genre since then with films like “Dead Silence” (2007) & “Insidious” (2010), it’s more than safe to say that his latest film, “The Conjuring” is a strong contender for best horror film of the year and definitely the scariest film I’ve seen this year by far. 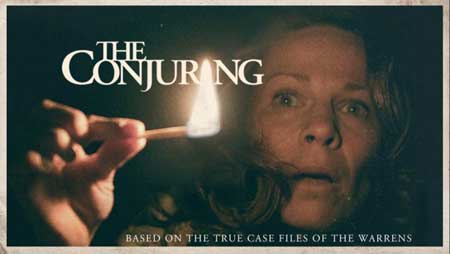 Based on actual events, The Conjuring is the story of the Perron family and the nightmare they experience after they move into a farmhouse back in 1971. Paranormal investigators Ed and Lorraine Warren (Patrick Wilson, Vera Farmiga) are called in to check on the claims of a sinister presence and find themselves not only in a battle to save the lives of the Perron’s and their children but their own lives as well.

It’s near impossible to speak about this film without spoiling it but I can assure you that the shenanigans that you’ve already seen in the trailers/commercials featuring the creepy hand claps don’t even begin to scratch the surface of what’s waiting for you in this movie! They’re calling it a Ghost Story but it’s a helluva lot more than that. The Conjuring takes some of the most worn to the nub horror tropes you could think of and rather than allow them to play themselves out in the usual way, it breathes new life into them thanks to Wan’s mastery of the genre and an extremely tense and terrifyingly effective script from brothers Chad and Carey Hayes that had the audience I watched it with literally at the edge of their seats from the beginning to the end. The film rarely gave us an opportunity to catch our breath in between screaming and jumping out of our seats! 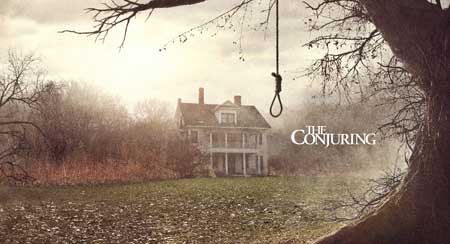 One of the biggest hurdles facing directors attempting to make a good horror film lies in the casting. Imagine what The Exorcist (1973) would’ve been like without Linda Blair? What would “The Haunting” (1963) have been like without Julie Harris? The Conjuring features what has to be considered one of the best casts ever assembled for a horror film. A cast comprised of real ACTORS, not some over the title megastar like Brad Pitt in a dumb movie like World War Z. here we have Ron Livingston as Dad Roger Perron and Lili Taylor as his wife Carolyn. Taylor in particular takes her character to places that most other actresses would be loathe to travel to. Her performance feels familiar initially but as the film progresses her character not only runs the gamut of emotions one would expect but the plot features a really nifty twist that takes Carolyn where no one in the audience expected her to go and Taylor really nails every beat of her character’s journey with pinpoint precision. Livingston essays his role with such an effortless grace that it felt like he really was married to Taylor and the children really were his. The five young actresses who play their daughters all act together as a unit with the feeling that they have lived their entire lives together. Special kudos to actress Joey King (As Christine Perron) who really knows how to get her character’s emotions across with her eyes. As paranormal investigators Ed and Lorraine Warren, Farmiga and Wilson both give their characters a sense of partnership and genuine love for each other that’s rarely seen in any film as of late let alone a horror film. There is a bit of a cornball aspect to their relationship but it never feels anything less than true.

The scares come fast and furiously in The Conjuring with a jump scare coming at you seemingly every few minutes or so and while some may feel like that’s an example of the film coasting by in order to eat up some running time, Wan’s camera never makes the jumps feel cheap. The film works hard to sell each one of it’s jump scares and all of them work, even the ones that you know are coming and are prepared for. And as for the scares that you aren’t expecting? Man…they hit me over the head with sledgehammer force and kept me nervous throughout. I was actually struck down with fear as soon as the film started since it begins with the investigators telling a story about one of their older cases that featured a personal fear of mine that I won’t discuss here except to say the word Pediophobia (Look it up and figure it out for yourselves). It scared me shitless and the movie was only five minutes old…

The special effects and makeup aren’t overtly audacious but serve the story perfectly. You aren’t going to find much in the way of Monsters in The Conjuring but what you will find is far scarier than the prototypical monster because the film plays on fears that all of us have (Or have had). Classic childhood fears like what’s under your bed while you’re sleeping or what’s behind your slightly ajar bedroom door? Fears that all of us have experienced as children are featured here and all of them took me back to my younger days (Eons ago) when I would find myself staring at my bedroom door in the dark all night, fearing that if I closed my eyes whatever was patiently waiting behind that door would have it’s opportunity to strike. 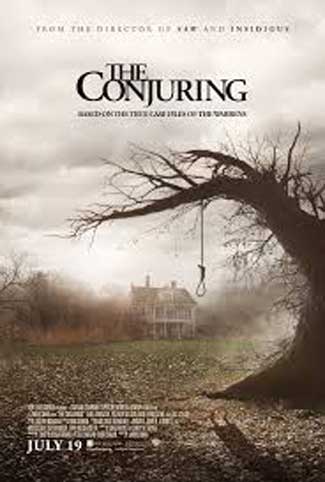 The final, frenetic third of the film is a pastiche of The Exorcist and a classic Twilight Zone episode entitled “Little Girl Lost” (Season 3, Episode 26). And if that sounds like it shouldn’t work, you’re right…it shouldn’t! The two stories don’t seem to have a point in which they can both blend together but they get along here like PB & J and help to make the finale of The Conjuring one of the strongest and most tense finales I’ve ever seen. I was sincerely petrified at what I was witnessing and was ready to cry “UNCLE!” at the top of my lungs repeatedly. And there’s a nifty little nod to another famous “True Story” tossed in at the end that’ll make you smile wide if you catch it….

James Wan doesn’t have anything left to prove. He’s proven himself to be a true innovator of the horror genre and he’s accomplished this without a lot of fancy CGI or big name stars. He’s done it by acknowledging the tried and true tropes of the horror film and tweaking them just enough to make them feel fresh and new again. And we still have his “Insidious: Chapter Two” to look forward to later this year. Can you imagine what that’s gonna be like?

The Conjuring is a deliriously effective combination of The Exorcist, The Haunting and Poltergeist that not only takes what might be considered the seemingly disparate plot strengths of all three of these films and makes them hum together in complete synchronicity, it makes them (Dare I say it?) even scarier than they were in their original films. It is a flat out, slam bang motherf*cker of a film that WILL frighten you if not make you go to bed with the lights on all summer long. It’s that good acolytes…

It’s SCARIER. This time you can believe the hype.

“The Conjuring” – Five out of five shrouds.