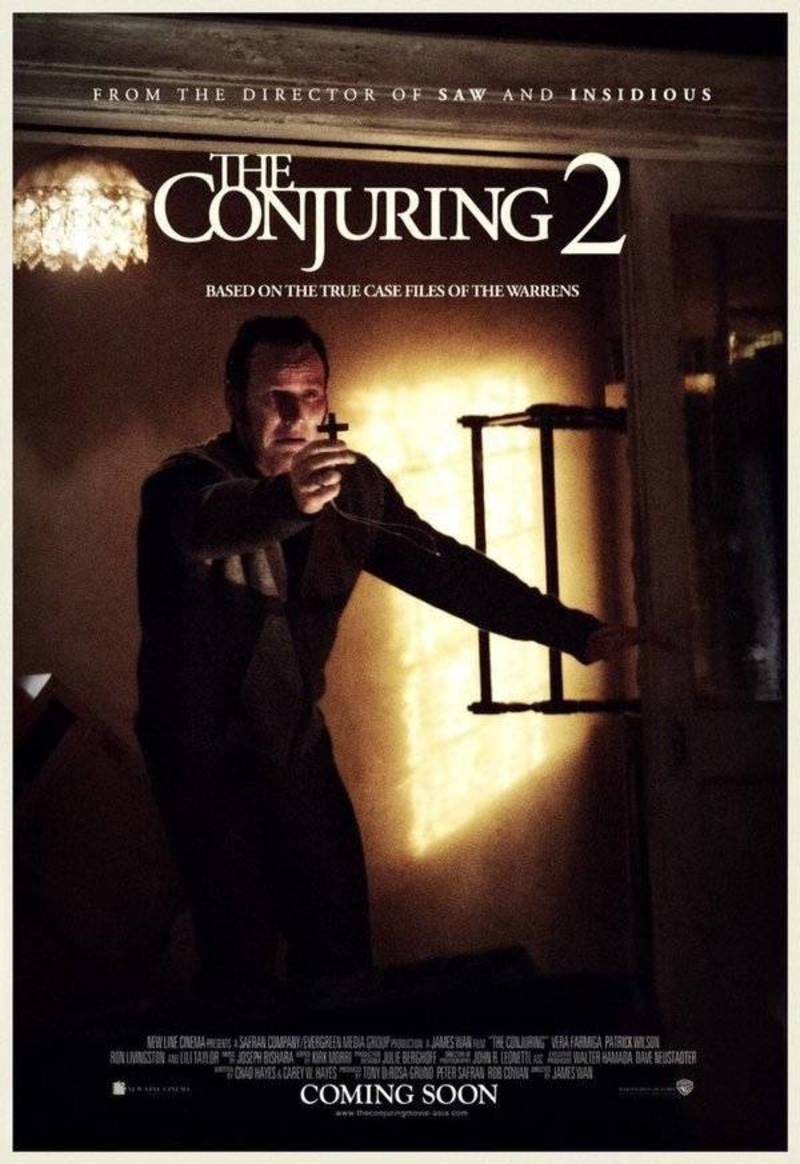 As someone who genuinely believes The Conjuring to be one of the scariest films he’s ever seen, I could not mask my joy (& trepidation) at the prospect of a sequel. The blockbuster success of the original film pretty much guaranteed a sequel was forthcoming anyway, but with original director James Wan guiding the proceedings, I felt pretty sure that at the very least The Conjuring 2 would be at least as good as the original film.

I certainly hoped so anyway. 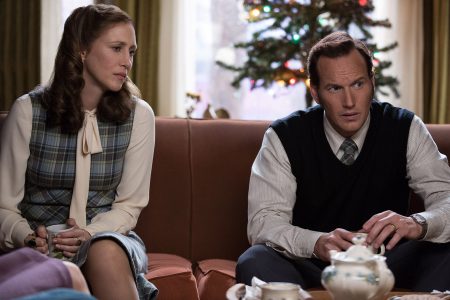 In 1977 England, down on her luck Peggy Hodgson (Frances O’Connor) and her four children find themselves the target of a malevolent spirit that’s attached itself to their dilapidated home. This spirit has also singled out Peggy’s youngest daughter, 10 year old Janet (Madison Wolfe) to be it’s means of communication to the rest of the family. After a series of ever escalating paranormal events involving sliding furniture, toys that move on their own, Janet’s horrific nightmares and a number of other unexplained occurrences, she enlists the help of paranormal investigator Maurice Grosse (Simon McBurney), one of the few people to take her claims seriously. Grosse gets in touch with the Catholic church, who then reach out to Ed (Patrick Wilson) & Lorraine Warren (Vera Farmiga), who’ve just come off an investigation of the Amityville Horror case (which is handled very nicely in an entertaining prologue). The Warrens then fly out to England to look into the case, and report back to the church. Ed promises Lorraine that it’ll be nothing more than that, but Lorraine has her doubts as she’s been experiencing visions of a evil nun who seems to want to do Ed some harm. She fears that this might be the one case where they not only find themselves overwhelmed, but the one where Ed will lose his life. 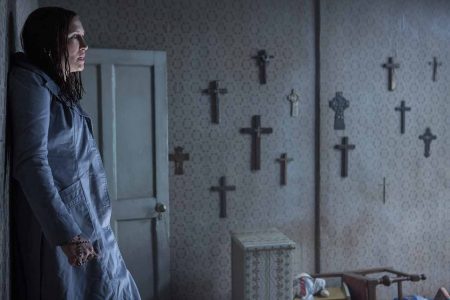 Once they arrive, it becomes readily evident that the Hodgson’s claims of spiritual activity is not only true, but growing ever malevolent and stronger day by day. Poor Janet is now channeling the evil spirit, and it won’t let her go. As the events escalate, and become ever more dangerous for both the Hodgson family and the Lorraines, some evidence comes to light from a woman named Anita Gregory (Franka Potente), that not only points to there being no such things as ghosts occupying the Hodgson home, but puts the blame for the prank squarely on the shoulders of little Janet. So which is it to be? Was the whole thing a massive, well thought out prank being pulled the bring the family some notoriety (& some money), or is it indeed a paranormal event the likes of which the Lorraines have never come across before? 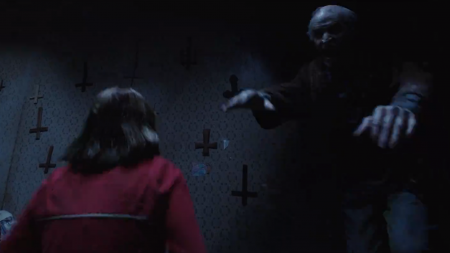 Written by Wan (& 3 others), the one thing that The Conjuring 2 does consistently is entertain its audience. The script is a well modulated and calculated thrill ride that expertly places its assorted jump scares and frights in just the right places, and takes pains to spread them out to maximize their effect. The excellent cinematography (by Don Burgess) makes sinister shadows loom large in the background, and envelops the best parts of the film in strong, sinewy shades of grey and black. The acting is of the highest quality as well, with everyone in the cast fully inhabiting their characters, thus making then feel both relatable and natural. As the Warrens, Wilson and Farmiga continue to imbue their characterizations with genuine feelings of love and responsibility to each other and to each case they investigate. Wilson in particular really inhabits the character of Ed Warren to a degree that I’m really not used to seeing in a horror film. Plain & simple, he IS Ed Warren. 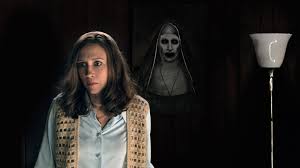 But while I’m not going to sit here and tell you that I didn’t enjoy The Conjuring 2 (I most certainly did), I did have a big problem with it.

Oh yeah, like I said earlier, it has all of the bits and baubles that a fright film should have, and it does a great job of springing them on its unsuspecting audience as well. The audience I watched it with was aghast in fear at moments in the film, and I know I saw more than a few people covering their faces in fear of what was about to happen on the big screen. But I gotta tell you, it really didn’t move me all too much in terms of frights. Now I know that this is partly because of my jaded nature, I’ve been watching fright films since Edison’s Frankenstein (1910), so I can categorically admit to being more than a bit on the jaded side. I won’t deny that. But the first Conjuring film scared the bejeezus outta me, and all of its scares were ones I was more than familiar with. And they were executed with the same visual flair and panache that Wan brings to this film. So why wasn’t I the least bit unnerved watching The Conjuring 2? 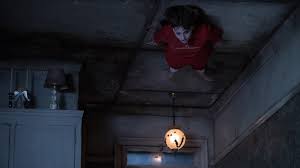 I think part of the answer lies in the sameness of the ghosts, demons or whatever you wish to call them in this, and just about all of Wan’s horror films. Think about it for a second, We had the ugly Darth Maul looking demon in Insidious (2010) (which was filled with older ghosts), which was then followed by the hideous old woman in black in Insidious: Chapter 2 (2013). And while he didn’t direct Insidious 3 (2015), the look of that film’s beastie was another old person (that needed oxygen yet!). While The Conjuring managed to escape featuring an older looking ghost/demon in it, The Conjuring 2 seems to revel in them, with both the old ghost that initially seems to possess little Janet, but the later additions of The Crooked Man (who is genuinely unnerving – but barely seen), and the evil nun demon that bears more than a striking resemblance to Marilyn Manson. Please forgive me, but the notion of a demon that looks like Marilyn Manson in a nun’s habit doesn’t scare me in the slightest. 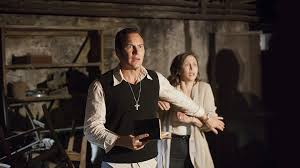 So what I found myself facing was another film that Wan has a hand in, that features geriatric demonic entities. They’re scary once, twice even, but they’ve sincerely lost their power to move me in any way, shape or form. I’m no expert on The Enfield Haunting, which just happens to be what The Conjuring 2 is based on, and one of the most infamous hauntings in British history, but what are the odds that it just happened to feature a ghost that was an angry old man? 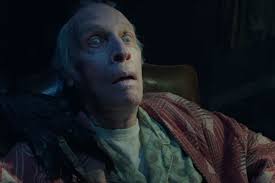 Now this might all sound like I’m calling The Conjuring 2 a bad film. Far from it, go back and read the first few paragraphs why don’t ya? Everything it sets out to do, it does. Indeed, I would go as far as to call it a masterclass in fright film making, and Wan a true master of the horror genre. I’m positive that 99% of the people who go see it are gonna be scared shitless, and that’s a great thing for the genre in general. It’ll lead to more big budgeted horror films, that (I hope) will go off in different directions and show some originality. As a fan of the genre, I can’t be anything else but elated at the prospects the success of The Conjuring 2 will bring. But I’ll remain firmly in that last niggling one percent that enjoyed sitting through the film, but had no problems going to sleep afterwards.

In other words, it might go down as the scariest film of the year for most, but I’m content to sit in my lonely room and call it a perfectly decent afternoon at the movies that I forgot about almost immediately after I left the theater.