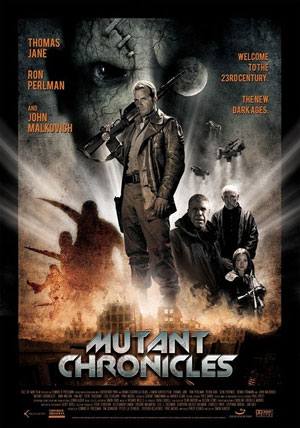 In a futuristic world where earth has been divided into four warring “Corporations,” a frightening new breed of NecroMutant threatens to destroy the global population. But is Brother Samuel, the leader of an age-old monastic order, the prophesized Deliverer who’s destined to destroy the undying beasts and save the planet? Seizing the chance to realize his destiny, Samuel rounds up an army of recruits who can help him do the job.

Mutant Chronicles is a film of epic proportions. It’s science fiction, horror and action all combined under one package. As we are taken to the future we find that the world has become under the power of 4 corporations (Mishima, Bauhaus, Capitol and Imperial). These corporations are constantly at war in hopes of becoming the dominant force by way of soldiers and military. As the films begins we are quickly given the history of the current state of affairs, a mysterious alien machine that has been buried beneath the earth for many years and a sect that has long known its history and what its capable of.

In a recent battle of year 2707 the machine gate or “great seal “is broken due to battle war fare. From its depth emerges thousands of zombie mutant beings that slay its victims with ease and agility. Their main weapon, a spear shaped arm that slices with razor precision. The mutant attacks are unrelenting and without mercy. It also appears that there main focus is to drag the bodies of the living and dead into this underground machine for the purpose of transforming them into mutants soldiers as well.

Meanwhile, a select few are able to escape to Mars but at the cost of leaving many behind to deal with the brunt of the mutant outbreak.

Brother Samaul played by (Hellboy) Ron Pearlman recruits a band of warriors to set on a perilous journey with the intent of destroying the machine before it takes over the human race. There weapon, a special bomb and the guidance of the Chronicles. An ancient book that instructs and leads them to there destination.

Now on to the review. This is one helluva a cinematic experience! The mutants easily as vicious as a hybrid dawn of the dead zombie and starship troopers alien combined. The look, set and work put into this film is incredible. Often to compliment the post apocalyptic feel we are graced with a limited palate of brown earth tones and the all too familiar blue/grays. Which has become a pretty fall back look for most films these days. Though the brown earth tones add that extra look and feel that help sell the story.

This film will not only appeal to horror fans but to a wider market of Sci-fi / adventure film-goers. There is action every step of the way with a cool apocalyptic feel.

What I really liked about it was that it wasn’t just a carbon copy of what was done before but a whole new story in itself. At one point we are given the chance to see the whole mutant transformation machine at work with pretty brutal methods and horrific results. It may surprise viewers to see some heroes of the story get terminated rather than triumph, but that is the appeal of this film. A cold and brutal journey.

Director Simon Hunter has a natural feel for showing the audience a future world full of grit, despair and chaos. The look is dead on and has a simi liar feel as previous apocalyptic thriller Doomsday. But its on-the edge presentation will keep you glued till the end. Overall one of the best horror scifis I’ve seen this year! This film also may deserve a couple viewing’s to take it all in!