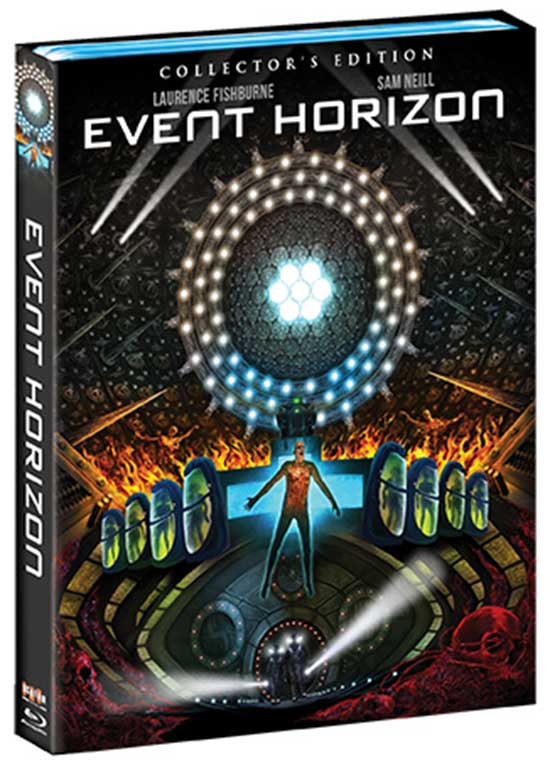 A rescue crew investigates a spaceship that disappeared into a black hole and has now returned…with someone or something new on-board.

It’s quite possible that Event Horizon may be among one of the most chilling films ever created. Then again the backlash from critics and sci fi horror fans complaining of plot holes, fragmented story lines and a genre confusion may beg to differ on my analysis. One thing is for sure, …when you pick up a film called Event Horizon starring Laurence Fishburne and Sam Neill that features a single picture of a ship in space, it’s a pretty safe bet that what you expected will radically change by the time the film is over. Event Horizon has always had a cult-like affinity for me. I remember seeing it for the first time in a rather dense filled theatre thinking that I was in store for a sci fi film with horror overtones. Well, it was partially right, but for all more accurate descriptions Event Horizon is literally an outerspace trip thru hell.

Something about the huge ship lost in space for so many years, something about a core generator that can warp drive the ship thru time portals, or maybe it’s the threatening architecture within that resembles a lethal weapon on its own appearance. From the minute the rescue crew finds this lost ship floating without crew, is when the movie begisn to saturate yuor viewing experience with a overwheliming sense of dread. When they begin to discover what may have occurred thru blood splattered walls and a “haunting-to -this day” reveal tape of the crew’s last video footage, that the power of this film starts to really sink in.

Sam Neill is the resident expert scientist engineer who built the core reactor of the ship. Laurence Fishburne who plays the role of Captain Miller is the stern and by the book leader of the rescue mission. We learn all about what, why and where this ship has been. The core which fuels the engine and voyage of the ship is revealed to be quite a bit more than just a travel device. It is able to fold space and send the Event horizon thru a black hole that gets it quickly from one place to the other. What is most intriguing is that the core is discovered to be a gateway that has transported the ship into a dimension they refer to as “Chaos”. Chaos is in essence a black location of pure evil. Hell, to be more specific. 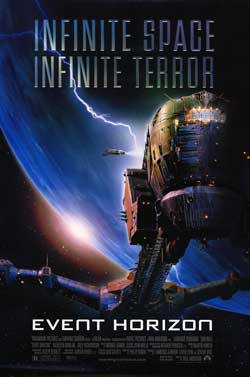 We learn that the ship passed thru the portal black hole and retained a part of hell with it. It’s former crew though were taken thru this dark place that inflicted all the sufferings of hell upon them which is later revealed thru some extremely frightening visuals. What stuck with me the most was the idea that black holes are portals into pure evil, a different perspective to a unexplained outer space phenomena. The ships name is of course named after the portion of black holes outer ring which in science terms is referred to as an “Event Horizon”

The ship itself wants to possess the crew as it now is inflicted with this evolving retained evil. As a result, they begin to hallucinate some of their worst imagined nightmares. 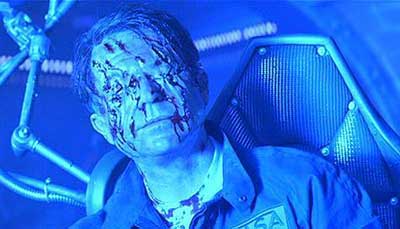 The creator of the core, Dr. William Weir (Sam Neill )becomes obsessed with it until it all but consumes him. The movie progresses in haunting themes, visuals and chaos culminating with a surprise ending. 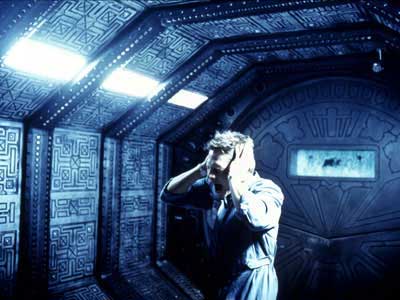 Directed by Paul W.S. Anderson, I still consider this film one of his greatest achievements. He has gone on to direct some pretty high profile films over the years, but it was Event horizon that captured all the darkest elements under a science fiction shell. The film apparently made a impact to a range of viewers who often cite this as Exorcist or Hellraiser in Space. The DVD has gone thru a few variation releases that later included some left out scenes and a smattering of behind the scenes footage. 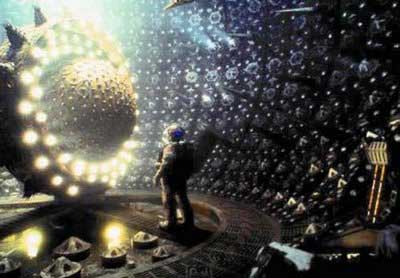 Event Horizon’s only real fault comes in the way of being too short for its own good. That shortness and editing room delivery created a film that needed more room to grow and explain itself. If I’m correct, alot of what was needed never even got filmed due to production budget issues and restrictions. So in result we have a product that many felt was condensed to the point of lacking proper expansion . Whether it’s the case or not, this film by my own recommendation is one of the scariest of all time. A true horror masterpiece that in many ways is underrated.