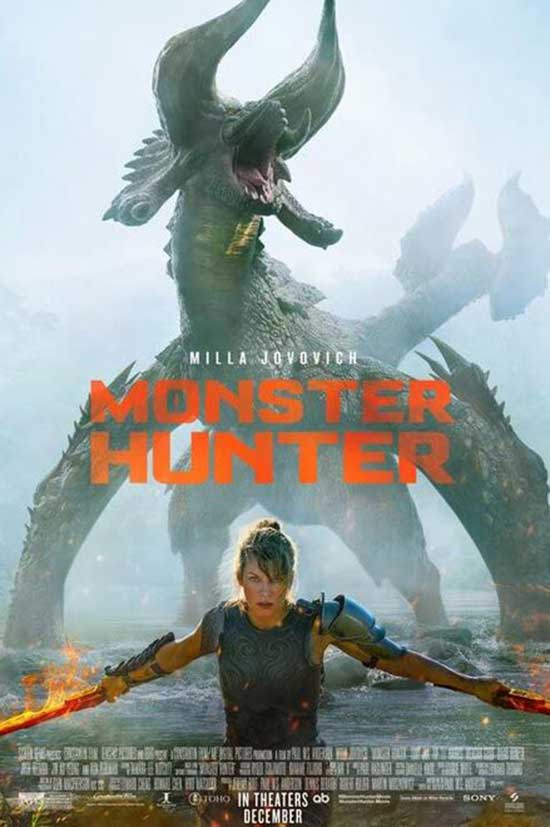 When Lt. Artemis and her loyal soldiers are transported to a new world, they engage in a desperate battle for survival against enormous enemies with incredible powers. Feature film based on the video game by Capcom.

The term ‘divisive’ was pretty much made for some filmmakers. Whether it’s the twee hipster stylings of Wes Anderson, Zack Snyder’s speed-ramping shenanigans or Quentin Tarantino’s obsession with letting you know he has better taste in obscure music than you, there are plenty of directors whose films are loved and loathed in equal measure. It’s debatable whether British director Paul W. S. Anderson makes it into this club, as there are lots of viewers who despise his films – maybe not so many who actively love them though….

Most movie fans will be familiar with Anderson primarily for his work with video game adaptations, such as 1995’s Mortal Kombat through to the numerous entries in the Resident Evil franchise (the latter all starring his now wife Milla Jovovich). He also helmed the crossover Alien vs. Predator in 2004 – arguably ruining two solid franchises for many fans in the process. His most interesting film though, and probably most well known to readers of this site, was the 1997 space horror Event Horizon; although utterly reviled by critics at the time (and certainly not without its flaws), it has since gone on to garner a huge cult following among horror fans, and with good reason.

Concerning the efforts of a group of astronauts on a rescue mission, sent to investigate the sudden reappearance of the eponymous, long lost deep-space vessel Event Horizon, this underrated gem initially looked to be heralding a bright career in horror for Anderson; genuinely unsettling, with some brilliantly realised themes and utterly vicious (even in the heavily censored cinema cut) gore, it remains a great sci-fi/horror hybrid that works well in both genres. Unfortunately Anderson has never returned to horror in the true sense, obviously preferring the easy pay cheques from game adaptations with their built-in audience.

Which brings us to Anderson’s latest – an attempt to bring another Capcom game to cinematic life in the shape of Monster Hunter. He produced, wrote and directed this time out – and once again Jovovich takes the lead role. The film was released in 2020 after a long journey to screen, first doing the rounds in 2012 before filming wrapped in late 2018. Unfortunately it’s proved to be something of a bomb so far, taking $31 million so far against its (relatively modest) $61 million dollar budget – perhaps in part due to the fact that the notoriously tough game series is more popular with Eastern than Western players.

The movie kicks off in typical fashion for this kind of thing, with an over-the-top steampunk-infused CGI effects sequence; this time featuring a sand-riding galleon being attacked by a colossal creature. It’s perked up though with the appearance of Ron Perlman as ‘The Admiral’, here swapping out Hellboy’s red body paint for a hilarious bouffant wig and leather sailor’s outfit combo. At the end of the intro one of the crew members has been dumped unceremoniously overboard into the desert.

Post-intro we meet Jovovich’s Artemis – a badass US Army Ranger – and her squad of impeccably diverse and catwalk-ready soldiers on operations in the desert, searching for a missing team of colleagues. After a short sequence where they compete to see who has the best profile and product usage, and spout inane tough-guy soldier dialogue at each other (one example being ‘I saw a dinosaur in the museum one time’), the squad are attacked by a huge armour-plated monster before being suddenly sucked through a mysterious portal into a parallel universe. They soon discover the remains of the missing soldiers – and are again attacked by what we come to learn is the ‘Diabolos’.

It seems they have an ally though, in the form of ‘The Hunter’ (the ever-athletic Tony Jaa), who fires a warning shot from his bow – too late for two unfortunate Rangers who are (very bloodlessly) killed by the massive creature. Various sequences follow, wherein Artemis and her ever-dwindling squad are beset by various kinds of CGI beasts in different terrains (kind of like a video game…) before she, as the lone survivor, meets up with the enigmatic Hunter. After some initial tussles they eventually form an unspoken bond, and team up to fend off the never-ending waves of critters.

By now it’s clear that it’s business as usual for Anderson; he employs his typical gimmicks in the shape of non-stop camera spinning around his actors, fully CGI effects (including the backgrounds) and complete disregard for the laws of physics. Basically this gives the movie the same feel of most of his post-Event Horizon output, that of being filmed by a low-rent Michael Bay imitator (and let’s be honest Bay himself is pretty low-rent to begin with).

Dialogue is mostly inane drivel (it may well make more sense to devotees of the game); the soldiers are incredibly blasé about finding themselves first hurled into a parallel dimension and then being attacked by giant spiders and dragons and such. The running time of an hour and forty-three minutes is far too long which makes the middle of the film feel surprisingly bloated and dull – and disappointingly we don’t get to see Ron Perlman back hamming it up until an hour and ten minutes in.

However….. despite all this, Monster Hunter is actually really quite good fun anyway. Visually it’s Anderson’s most impressive movie to date, with some genuinely good action sequences – and it’s surprisingly dark too, with scenes such as giant spider eggs hatching from the side of an unfortunate (and still alive) Ranger. While much of the cast is gone from memory very quickly, Jovovich and Jaa actually make a brilliant Odd Couple; they really spark off of each other and share a genuine chemistry on screen. Needless to say Jaa is his usual astonishing self in the fight scenes, but Jovovich holds her own in the stunts and action stakes.

Most importantly the film never takes itself seriously at all – even embracing the comedy oversized hand weapons the game is famous for. Monster Hunter is certainly no Oscar winner or work of art, but approached in the right way it’s difficult not to get caught up in its daftness and light-hearted approach. It may be slick, empty and preposterous but it’s actually pretty good fun too.