After 4 hugely successful years in the US, AFTER DARK: HORRORFEST comes to EMPIRE CINEMAS with the AFTER DARK ORIGINALS; a horror festival weekend around the UK through UK distributor G2 PICTURES – famous for providing cutting edge genre films. 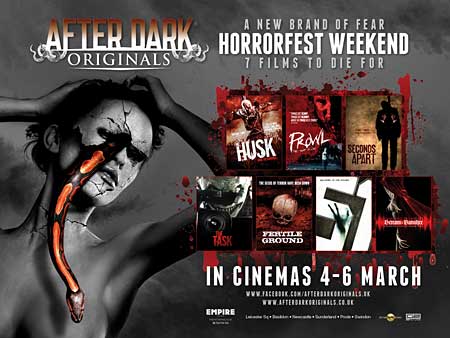 Starting Friday 4th March through to Sunday 6th March horror fans in key cities in the UK and Ireland will get 7 brand new original horror films and enjoy the opportunity to get dressed up and participate in exciting in-cinema activity and competitions.

Films include; Husk – starring C.J. Thomason (Harper’s Island) – about a group of friends who become stranded beside a desolate cornfield and find an old farmhouse. They soon discover the house is the centre of a terrifying supernatural ritual. Prowl, starring Ruta Gedmintas (Lip Service) and Courtney Hope (CSI:Miami), is a gruesome tale of a bunch of friends who accept a ride from a truck driver and find themselves taken to an abandoned warehouse where they become the prey for blood – thirsty creatures learning to hunt. Scream of the Banshee stars Lance Henriksen (Aliens, The Terminator). When a Banshee is unleashed, all who heard her scream start to die one by one.

Also showing are; Seconds Apart, Scream of the Banshee, Fertile Ground, The Task and 51. See below for full synopses. Each title will also receive a separate DVD and Blu-Ray release with a complete ‘special edition’ box set scheduled for Halloween 2011.

In the US AFTER DARK ORIGINALS: HORRORFEST has been celebrated with the same enthusiasm as with the Rocky Horror Picture Show. UK fans finally get the chance to become part of one of the most important festivals in the movie calendar.

After Dark Films was formed in 2006 by director/producer Courtney Solomon (An American Haunting, Captivity), and Hong Kong based real estate magnate, Allan Zeman. In November of that year they launched HORRORFEST, playing eight never seen before acquired horror films in an annual weekend-long theatrical event in 500 theatres across the US. Along with their long-term home-entertainment and TV partners Lionsgate & Syfy, in 2010, After Dark expanded its grasp on the horror genre creating AFTER DARK ORIGINALS, tapping into the vast and innovative talent of directors and filmmakers from HORRORFEST’s four years and producing new features themselves.