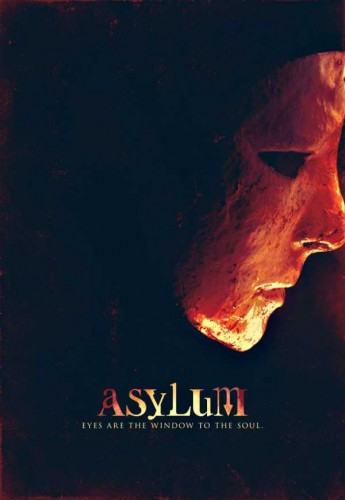 A veteran hostage negotiator’s next call leads him to an overrun insane asylum. He soon finds that dark forces are pushing the patients to commit atrocities, and he may be the only one that can stop them.

It always sucks when things don’t turn out the way you hope or envision them. It’s never more true when pertaining to the medium of film. On paper (or in script) the idea sounds brilliant but things can quickly go south leaving the filmmaker with a big steaming pile of dung to dig through and try to find something of value in. This is very much the case with AFTER DARK’S ASYLUM. This is a case where the producers thought they knew best but quickly learned they had screwed the pooch. From the research I have gathered the story behind the scenes goes something like this. Writer Chris Mancini pitched his original script to After Dark as a vehicle to be his feature debut as a director.

They bought his script even though they passed on his involvement as a director. In a move to save money, they shot in Bulgaria with native director Todor Chapkanov, even bringing in another writer to re-work the script. When all was said and done, After Dark realized they had made a HUGE mistake and the film they were given was garbage. In a desperate attempt to try and salvage their investment, they bring back Chris Mancini. He was given a small chunk of change to come in and try to assemble something watchable. So what did he do exactly? Did he succeed? The answer to these burning questions lies below, so sit back and read on.

Inside a prison, a riot and hostage situation has arisen and a need to calm the mess is at a burning high. A riot squad, led by Sharp (Bruce Payne) is suited up and ready to race in. They’ve also brought along master hostage negotiator McGahey (Stephen Rhea) to help in the negotiations. Once they enter, it’s as if they’ve begun a descent into hell. After a firefight with the crazed inmates, team members go missing, and they must split up into several groups to try and find them. Their communications are cut off and the doors have mysteriously locked, there is no way out. Soon they realize the inmates are possessed by some evil force and out for blood. Their leader has gained great powers and is trying to open a portal to Hell. Their only hope of survival is McGahey who realizes that his brother is the one who is leading them. 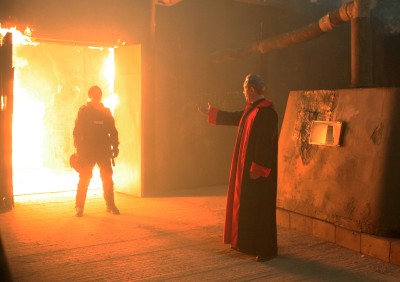 Sounds like a solid film, right? Well, this is only part of the story. You see, this is the movie within the movie. The rest of the movie mostly relies on two editors who are watching this footage to build a trailer and continuously ripping on the film ala MST3K throughout the runtime of the picture. Also, there is a minor side story following the dimwitted producer who makes some horrible decisions in order to complete the film. 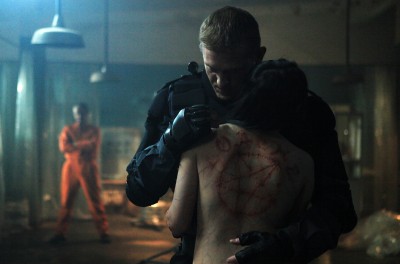 As far as noble efforts are concerned, Chris Mancini did the best he could do with whatever pocket change he was given to attempt his save. Aside from a few chuckles, most of the humor just falls entirely flat. THE X-FILES fans might feel a bit of excitement seeing Dean Haglund as the sleazy producer (it was great to see him). The two editors who are constantly belittling the film, well sadly, they’re just annoying. As for the actual film, it may not have been as bad as they thought. You really only get a small taste of what they had accomplished since you have to listen to the constant voiceover. Personally, I would have preferred to view (for better or worse) without the added un-funnyness. 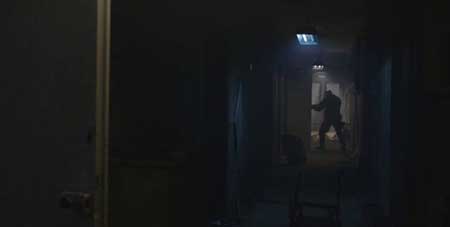 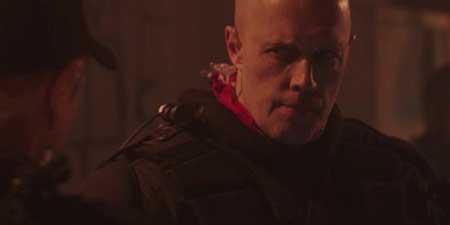 As it is, ASYLUM is a mess, from the moment the film starts, you can see it and feel it. I understand why After Dark did what they did to try and recoup their loss but the subpar product they are offering their fans here is just appalling. They need to redeem themselves as quick as possible or they will lose them all. Steer clear of this garbage if you can. (1/2* out of 5)