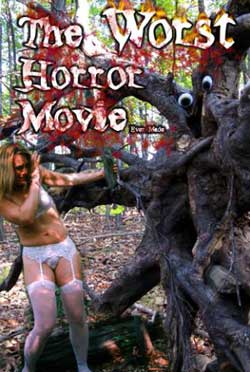 A group of friends get together for a card game, but within 5 minutes most of them die horribly, leaving the hosts to run for their lives (and from the law). Along the way, they encounter every conceivable horror movie monster/villain, but with a new twist

We get alot of films that cross our paths in this web site. They usually more or less fall within 3 tiers. The low budget / home made, the independent releases – pro made and the big budget tier releases.

Then occasionally you get the odd beast that falls below every category at yet still manages to provide some level of entertainment value. The name of the film says it all. “The worst horror Movie Ever Made” directed by the infamous Bill Zebub and his band of pseudo actors under the Bill Zebub Productions outfit.

Although it would be easy to to take shots at a film with that title, not all is what it seems. I’ll explain later. Though your in for one odd beast to say the least. In fact so rightfully so that a review doesn’t even really cover the bases.

TWHMEM, is a low budget, barely scripted, filmed with camcorder style movie. The film manages to offend every way possible…..slur racially, religiously, professionally and mentally. There is so much in this film that it makes you wonder if it was made up along the way. Where do I start? We got a werewolf, a sh*t monster, a quarantine, a showdown, a baby lair, a Zom-“Bee”, Lesbo Vamps, A killer, a giant spider, bananna peel, and even a Zombie Jesus (or some configuration of). The plot is shot as cheesy, as low key and as cheaply as possible with some of the worst 3D effect s on the planet that makes simple out of the box tutorials look like masterworks. In fact its so cut and paste that it had to be intended rather than an actual piece of commissioned work provided. The dialog is forced, contrived and some of the worst I’ve heard only backed by horrible lighting, clique comments and nudes scenes that use plastic parts instead of actual nudes.

Our story that mostly roams aimlessly from scene to scene begins with a simple card game and a group of friends. Rocco Marjone is the focal point who ventures on a quest with his girlfriend through every scenario imaginable. You know from the get go with the head smashed in a bathroom using a watermelon as a prop, an axe made of tinfoil and a bunch of gore scene using fruit instead of FX materials that this is one hellava cheese fest. If that doesn’t scare you away, its gets worst as they battle the sh*t monster and rejoice in a sh*t mouthed kiss. They visit a group of stomping good ol yokels, encounter a mummy wrapped in toilet paper, get in a fight with a killer using babies as nunchucks, get caught by a giant spider that looks like it came out of a bad episode of Sid and Marty Croft and that’s only a portion of the film.

Now with all this mayhem and crappy bits and pieces how can I recommend this bastard film child to my audiences? Well that’s what makes it so perfect. It doesn’t take itself seriously and has a hell of alot of fun doing it. In fact its probably more imaginative than the last 10 films that I’ve seen by major studios. Let’s face it, it is as cheaply done as it goes and is a slap in the face to serious filmmakers. But so what! Not every film is “supposed to follow any set of rules. An if you are easily offended, then you shouldn’t be watching these kind of films anyway’s. However, really as far as it goes TWHMEM is one of those films that I’m sure will get watched quite few times. This is the legacy that Bill Zebub has provided for our otherwise drone set of horror features that repeat more than entertain. You’ll shake your head more than once and laugh while doing it. Hey in any case its further proof that anyone can make a film. Though imagination is required, and Zebub has that.

If you made it through the full experience without ejecting, losing you mind or deciding that you have the skills now to make your own film then you are indeed a trooper and lover of the bizarre. Often the film feels like a cheap dream that lost its place even in the great beyond. It is a hoot of a good time in the worst way

Note: This film recently been re-shot for a 2008 version!

can’t find it? Check it out at www.billzebub.com