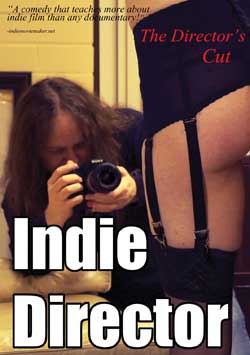 Any review of INDIE DIRECTOR would be misguided–incomplete–without an introduction to its notorious creator, Bill Zebub. Maybe you’ve heard of him. Maybe you haven’t. In any case, he’s brash, manic, politically incorrect, obsessed with heavy metal music–and nudity–and, for the past two decades, has been churning out twisted, no-budget shock flicks like JESUS CHRIST: SERIAL RAPIST , BAD ACID, THE WORST HORROR MOVIE EVER MADE, its remake, and THE MOST OFFENSIVE COMEDY EVER MADE. 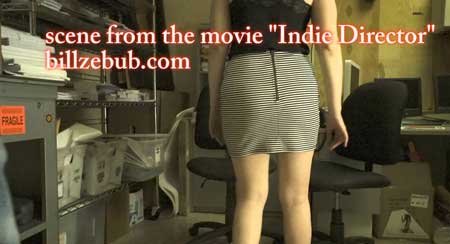 In the semi-autobiographical, quasi-documentary INDIE DIRECTOR, Bill Zebub self-reflects . . . We see him experience the many joys and sorrows of independent filmmaking. He struggles to find recognition, deal with producers and distributors, and, overall, remain an uncompromising guy in a world that demands compromise.

Mostly, though, he rants and raves, spewing forth an unfathomable amount of independent rhetoric, criticizing the movie business’s politics and–well–everything and anything you could possibly imagine . . . often with naked women in the room. Yeah, there’s tons of nudity. It puts BARBARIAN QUEEN and DEATHSTALKER to shame. 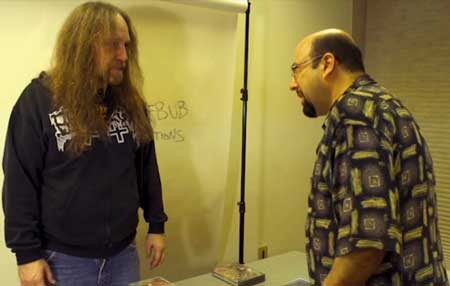 INDIE DIRECTOR comes off like some kind of insane cross-breed between Woody Allen’s STARDUST MEMORIES and Lloyd Kaufman’s TERROR FIRMER.
It is almost plotless, but, roughly, the story goes something like this: Bill’s DVD distribution gets cut off after one of his movies offends a company high-up. He nevertheless gains a little bit of success when a P*rn distributor releases one of his films, even though it’s not a P*rno. Riding the coattails of that success, he then launches a bigger, better movie . . . and that’s pretty much it. The movie, though, is non-linear and the plot, in no way, is the point of the whole thing. It’s more about the themes and experiences involving–well–the life of an indie director. Something like that, anyway.

This flick wants–strives–to alienate 99% of all viewers. So, it will probably have that effect on you . . . with its ungodly length if nothing else. 135 minutes is simply an endurance test for a free-form, often-improvised movie with community-access-television production value. That’s not to say there aren’t things to like about it . . . depending on who you are.

If you’re the potty humor sort, there’s a lot of Bill waxing poetic about his bowel movements and his girlfriend’s vagina. There are authentically clever lampoons of horror conventions and the genre press. FANSOFGORE magazine? It has a great metal soundtrack, some good acting as well as some enjoyably bad acting. It’s admirably self-deprecating at times, albeit narcissistic. As Bill Zebub says, though, “I’m too ugly to be narcissistic.” 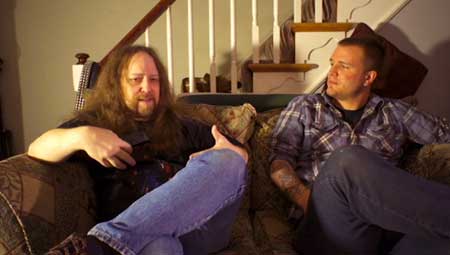 Most of all, the actor/director/writer pulls off his on-screen presence. His crazed pontification carries the whole movie, and his performance is energetic and charismatic.

But, after the first hour, Bill starts to feel like that last drunk guy who won’t leave your party. And the movie stops driving forward, too, feeling totally inane.
Bill’s attitudes, like his humor, you’ll either get behind or find obnoxious. At his best, he comes across as a champion of individuality and creativity. At his worst, he’s rather childish, professing something like: if my constant homophobic slurs offend you then you can’t be in my cool people club anymore. Either way, you get to voyeuristically watch him behave like he does. And some of that could prove fun . . . for the right person, preferably a filmmaker, fan of his, or someone in the horror community . . . or someone who just wants to see him fondle breasts, because he does that constantly.

INDIE DIRECTOR, despite its many flaws, is unlike anything ever made. Really, it blows my mind that it even exists. Are his comedy-horror flicks better, more enjoyable? Yes. I think so. But it is, probably, the closest thing no-budget, camcorder-filmed trash movies have to an 8 1/2, and it’s doubtful that will never change. So you might as well check it out, see if you’re in that extremely small minority of people who would enjoy this sort of thing. It won’t take you long to figure out if you are.