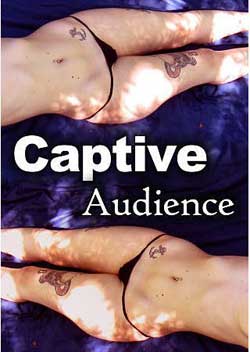 An unfortunate woman is kidnapped and subjected to deranged abuses. When she resists, her captor warns her that if she does not comply with his wishes, he will seek a new victim, but that other woman will be killed after his wishes are fulfilled. He videotapes his attacks and forces the captive to watch, telling her that she could have prevented the ordeal. Each time she says “no” she is really saying, “Defile another woman.” Watch with extreme caution

It seems as of late, at least from my perspective, that the Bill Zebub production is on a mass film and release mission. It could be timing, but I’ve seen at least 1 release a month come thru my stack of films to review. If you’ve been following comments on his previous releases like “Ant-Farm Dickhole and “Zombie Christ”, then you already know his material is adult driven, offensive, and usually highly titillating. This latest release I’m reviewing is called “Captive Audience”, though it seems to be void of some of his usual humor rather shooting right for a “get straight to the point style” of storyline. In fact, most of the film is without spoken audio relying on a musical score backing.

I was immediately trying to call this one out as a specific product meant for a specific type of viewer. It actually feels like a precursor to his other release title “Breaking Her Will” but without any real storyline.

“Captive Audience” starts out with a naked model dancing in the woods and then proceeds to fill every other moment with some sort of female captive forced to submit to the antagonist’s desires. The models are simply captured, bound and then played with. (This ranges from torture fetish, to rape to sometimes death). The whole thing is pretty convoluted as we only see a POV from the camera eye.

In many instances, the women look un phased, un shocked, and somehow really open to just drop their shirts and panties without any real reactions. We are under the assumption that the cameraman is also holding a gun or such to get them to comply…but really alot here is left up to the imagination. I will say that we learn a few things about this whole affair in the final scene, but that’s really not enough to makeup for their un enthused looks on these girls faces. The situations are all set up the same, in where they lie down and rock back and forth as simulated sex is performed on them. 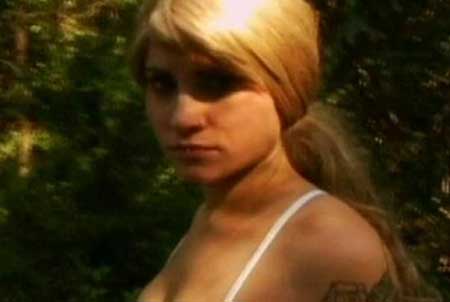 The element of horror is tied pretty loose in this film, as while we do get plenty of the kidnap, bind and rape aspects, we also assume it’s an unrealistic film that is catering to a exploitation audience who don’t mind seeing a bunch of strippers (we assume by the number of tattoos they wear) taking their clothes off in front of the camera.

I’d have to say this is one of Bill Zebub’s weaker works failing to invoke a real premise. At least in some of his other releases he provides humor, disgust or some combination there-of. “Captive Audience” is simply a bunch of stripper-for-hire-females who have agreed to do a very loose script involving some rough-play here and there. Due to it’s lack of much effort in editing, dialog, or acting it probably wont be a choice selection for fans of Bill’s work. I’m gonna have to redirect you to “Breaking Her Will” if this kind of scenario is a interest point.