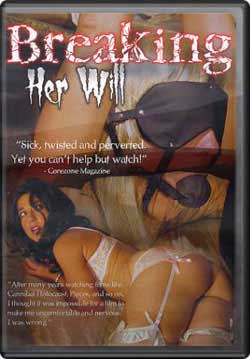 This is a disturbing movie about a sexual sadist who abducts a hitch hiker and systematically destroys her spirit. Bill Zebub was studying personality theories (psychologically-based, not neuroscience). In his research he came upon coping mechanisms used by people who are in high-stress situations, like kidnapping. Many people are familiar with the Stockholm Syndrome, in which case a woman falls in love with her captor. This is an unconscious defense. It is far less stressful for a person to be a captive when she is in love with her captor. In some people the mind protects itself this way. But what about a captive who is tortured? Some people break down and become completely depersonalized. Their minds become flat. No extreme reactions. (no pain, but also no pleasure)

There are many cases of victims who exhibited behavior that seems rather peculiar – like victims who, after being set free, show absolutely no interest in the prosecution of their tormentors. In some instances, these people had many opportunities to escape, but their wills had been broken. This movie is about that phenomenon.This movie is disturbing from beginning to end. Bill Zebub’s intention is to show that things like this really happen, and when they do, there is no way to make the story inspiring or to show the strength of human spirit, and there is certainly no reason to have a mandatory revenge ending in which the victim ends up on top (such stories are for writers who feel guilty).

This kind of subject matter needs to be disturbing. If you don’t feel like you have to take a shower after seeing this movie, then the movie failed. Everything about it is twisted – the way it was shot, the soundtrack, and the events. This is not something that should be made pretty. Abandon all hope, ye who enter. And in your despair, be thankful that these things did not happen to you.

The sleazy mind of B-movie director Bill Zebub is at it again, this time turning his attention to a serial rapist-kidnapper (Jackie Stevens) whose modus operandi is to abduct young girls and subject them to a host of stomach-turning acts of torture and torment. With an oeuvre built on exploitation, tastelessness and depravity, the schlocky, do-it-yourself filmmaker ups the ante with this cringe-worthy effort.

From the harrowing mind of Bill Zebub comes another cinematic experiment in cruelty. For those following along, Bill Zebub is a underground B-film maker who makes low budget productions based on anything he can drum up at the time. The majority I’ve seen is more on the humorous end whether intended or just by any attempt at film making that comes out of his mind. That do it yourself and shoot commodity is also what brings some of the ridiculous charm to his films.

This latest effort abandons all humor and mishaps in exchange for a experiment in cruelty. The premise can mostly be summed up in a couple sentences. A guy picks up a hitchhiker, pulls over, and with a knife to her neck locks her in the trunk to take back to his lair. The lair is actually his basement in which he has prepared a couple of wood pieces mounted to chain and tie her to. The story is his process of “breaking her will” per mind games, humiliation, and starvation.

The idea is pretty much all too familiar that has been served on a few different plates. It’s rooted in the public fascination with seeing someone tortured per slow degradation. Our 2 characters are Jackie Stevens & Kathy Rice. Kathy gets a special award for subjecting herself to the barrage of humiliation and nudity for most of the film that she had to endure. On the plus end, she’s pretty hot, so there’s no complaints there.

The idea itself can almost be directly rooted from serial killer sagas who inflicted this kind of slow decay among the human spirit as they were made to be chained in basements and starved with the promise of food on obedience. The film takes this same direction but adds its own flavor of add-ons. Though in my book reviews sessions, I have come across serial killer profiles who have acted on these terms in reality rather than fiction.

The main aggressor Jackie Stevens, is believable in his lines but less believable in his appearance. I suppose the role could fit anyone who can play and act on the lines, I just thought the rapist serial role would work better on someone more devious looking and less like the guy next door who watches sports, drinks heavily and attends an occasional Iron Maiden concert.

As we follow in the narrative, it is clear what the rapist wants. His fueling obsession with crucified women photos (some kind of online fetish site that posts pics of women crucified in various nude poses on crosses) seems to increase with each passing day. Meanwhile he continues to subject and journal his exploits of his captive as he furthers his attempts to break her of her will into a state of ultimate obedience.

The process comes off as a Newbie rather than someone who has done this time and time again. Though he quickly assumes a god-like persona as Kathy becomes more and more submissive to his demands. Acts like oral sex and eating like a dog become routine to her. The point being to inject fear into her to the point where she gives all self will. This motive of steps is directly taken from news reports and techniques used in overseas torture methods. Not to mention quite few films that have directly or indirectly used this process to lay out a variety of thrillers.

The ultimate motive becomes apparent when he gets her to the point of being able to inflict the process on other captives at command without need for escape. This is furthered by a series of lies that scare the captive into believing she will be ported off to another more ruthless captive overseas. As much as this work is fiction, the reality is still an issue that continues to this day. In that sense this film could easily serve as a how to manual even if unintended.

Can’t find it? Check it out at www.billzebub.com