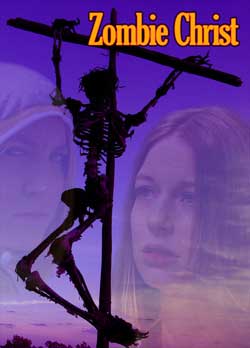 Druids resurrect the partially mummified remains of Jesus. They force the zombified Christ to commit unspeakable acts as their sect prepares to rule a new age of mankind.

ZombieChrist is a title just asking for trouble. But then again once you’ve determined this to be a Bill Zebub production, your pretty much in for something vulgar and different.

In the tradition of Euro films, ZombieChrist wastes no times in getting into weird Wiccan-like naked chicks. I’m not really sure if the premise behind them was important, just that they are fully unclothed chanting about and determined to raise the spirit of one abomination called ZombieChrist. Upon our Wiccan moment in the woods, we come upon another hottie seemingly obsessed by the sprit of darkness. Her convulsing body gives birth to a skeletal thorn-crown-wearing entity.

Ok, so your not a fan of this kind of stuff? Well maybe you are, just keep in mind that it’s all meant in a very unserious tone, almost presented as a parody of itself. Bill likes to stir the waters, and he also appreciates a few hot women doing quality screen a time. Blasphemy, and nudity…yep there’s plenty of both here. You won’t find this one in rental stores so if you acquired it elsewhere then you should already know what your getting into.

First off, lets just say, ZombieChrist is filled with nude babes and freaky skeleton sex. Now that probably won’t make any sense, but the premise of ZombieChrist has the bones of Christ rising from the grave to dominate and have his way with willing women. I’m into sure I even got the full premise of what, why and how, just that every other scene was a skeleton puppet raping another tattooed Goth vixen (or other). I think about halfway thru the movie you really start appreciating more the naked women scenes than the silly hand controlled bones. I mean I get its supposed to be shocking, supposed to bone-Christ, but c’mon they only thing that offensive is if you don’t like to see woman on all fours getting a bone up their ass. I’m just saying….

It’s crude nature is overshadowed by a ridiculous plot line that really is only offensive if you use your imagination. Though most viewers will probably laugh, get the jokes and wonder how Bill got all these women to strip for the camera. There is a nice helping of campiness as ZombieChrist’s spirit overtakes theirs and causes them to jiggle around on the floor. Then of course there that skeleton on a surf board-done-Saturday-morning-cartoon cheaply in front a blue screen. You might enjoy the nun getting raped, who seems to like it as she sticks her legs up in the air and gushes with the spirit of bones, the crown of thorns wearing freak. But, hey le’ts not forget that this movie is intended to be offensive so you have to follow the symbolism of a resurrecting corpse and the obvious play on Christianity to get the full gist of the crudeness. In all it’s the camera man who has the most fun, zooming in and out from crotch to crotch, into another scene that does much of the same.

Maybe its wrong to say, but every time a woman comes on screen in a Bill Zebub production, your first thought turns to …when she gone show her boobies. Bill of course obliges and its a good day for all. Don’t come to the table expecting acting, because there is none. I’m more obliged to believe that Bill left a flyer at a strip club inviting all to participate in his latest production.

I appreciate a good creative venture, especially in this day and age of repetition and conformity. I’m willing to bet Bill just jots down these ideas over a 12 pack and has enough motivation in him to make it so… Bill has a style that exists somewhere between professional and a young kid with a camera. His puppetry practical fx would certainly suggest so, though he also knows what his audience wants. I believe you have to call like films out on the pedestal they stand. Of which this movie is pure cheese, silly Jesus and a good roll thru of hotties doing the nasty.