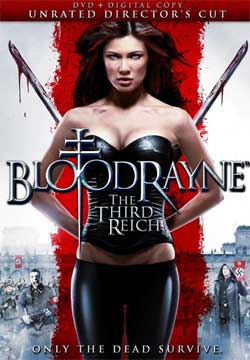 Half-human, half vampire Rayne has been fighting the forces of evil for a century and a half. Now she faces the purest form of evil she has ever experienced in Hitler’s Nazi army. She has become the hunted now that an ambitious Nazi physician knows of her existence. He needs her blood to make Hitler immortal and extend the Third Reich’s reign of terror indefinitely.

I had never seen the first two Bloodrayne movies so when I received Bloodrayne: The Third Reich I thought I would brush up on my Bloodrayne lore. I knew it was based on a video game that ironically, being the avid gamer I am, I have never played; it received slightly better than average scores when it was released in 2002 for the Playstation 2, and has become more popular on the PC since then. The first movie had an impressive cast: Michael Madsen (Reservoir Dogs), Michelle Rodriguez (Machete, Resident Evil, Avatar), Billy Zane (Titanic, Dead Calm), Udo Kier (Rob Zombie’s Halloween), and freaking Sir Ben Kingsley (Schindler’s List, Gandhi; he apparently received a Razzie nomination for Worst Supporting Actor for this role in 2007). Even Meatloaf was in that movie. I queued it up on my Netflix and prepared myself for razzle-dazzle.

I didn’t even make it 30 minutes before I stopped watching it. But, what do I know? The sequel, Bloodrayne 2: Deliverance had enormous DVD success and introduced the smoking hot Natassia Malthe as Rayne, ushering an opportunity to create the third installment, Bloodrayne: The Third Reich. And you know what? It isn’t half bad. 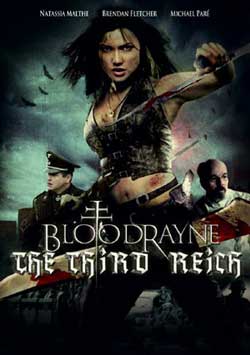 The third installment of this franchise seems to have gotten this Bloodrayne thing down. Compared to what I saw of the first movie, which I found so woefully disappointing, Third Reich is a landmark cinematic achievement. The acting is a great deal better, maybe because the script is so much more believable. That’s saying something because the premise of the story is iffy at best. When I told my lady that a Nazi doctor is trying to harvest Rayne’s blood to make Hitler immortal she said, ”Man, that’s so stupid yet so cool at the same time!” What makes it work? The solid script. The cinematography looks like an actual film rather than something created from the scraps of a Xena Warrior Princess set, and the action scenes are edited nicely and exhibit some thought in the choreography (although I saw Angelina Jolie do the same moves in Salt) and athleticism in the performance. 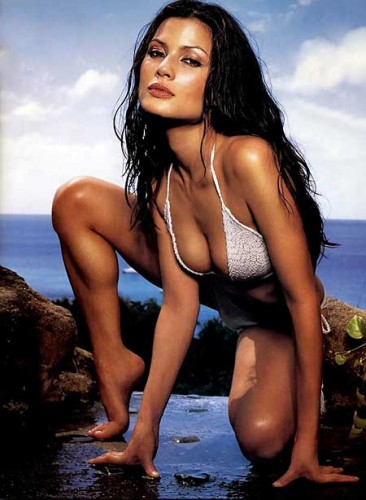 Now, back to Natassia Malthe. She’s actually been in a few movies I never realized she was in, some I’ve seen, some I haven’t. Lake Placid (1999), Elektra (2005), DOA: Dead or Alive (2006), and Slave (2009), not to mention some appearances all over television. Not only is she beautiful but she’s not a bad actress either. Think Milla Jovovich with a little more range. It’s rare to see an actress who is likely cast for her looks actually have some chops in the acting arena as well, and I applaud her for it. If I was wincing at an awkwardly delivered line, she wasn’t uttering it and I found that refreshing. Here’s hoping her agent gets her some more meaty roles, I think she could pull it off.

In spite of a sketchy premise and a lackluster opening effort, Uwe Boll has created something in Bloodrayne: Third Reich that I didn’t think was possible: an entertaining movie that has piqued my interest enough to throw Bloodrayne 2: Deliverance into my Netflix queue. Of course, casting Natassia Malthe doesn’t hurt either. When’s Bloodrayne: Forthcoming due out?