It would be useless to try and rank Bruce Campbell’s films for two reasons: 1) There’d be whiners commenting about the merits of each of the Evil Dead films and why they should each be number one, and 2) You can’t quantify that much greatness. As such, even though I numbered them, this list is really in no particular order.

13. From Dusk Till Dawn II: Texas Blood Money (1999)
The best part of this terrible direct-to-DVD sequel to a movie that’s actually good? (See my Top 13 Modern Vampire Films list for more on that.) When Bruce Campbell shows up. OH YEAH. 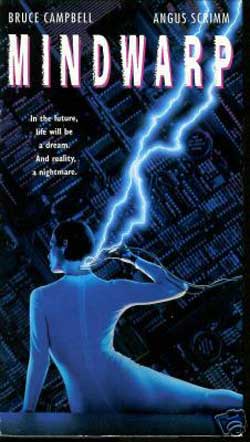 12. Mindwarp (1992)
Although one of the greatest actors to grace the genre, Bruce has been in some atrocious movies. It’s a shame, really, that all his talent goes unnoticed to most people outside the genre because of this. However, it takes a lot of talent to make those bad movies worth watching. Mindwarp, one of the only films made on Fangoria’s short-lived Fangoria Films label, is an atrocious movie but somehow pleasing. It’s set in the future—2037 to be exact—and, like most post-apocalyptic films from the ‘90’s, it’s built on the premise that our ozone layer has been destroyed. To cope, the world is run by computers and most everyone lives via virtual reality, except for Bruce Campbell; he doesn’t need virtual reality. (I think this may also be because the virtual world couldn’t handle Bruce Campbell; that much machismo would make cyberspace explode.)

11. Congo (1995)
Congo gets a bad wrap. Everyone says it’s bad, and it has a 22% rating on Rotten Tomatoes, but it has Bruce Campbell and Tim Curry, so this is obviously not the case. Any movie starring these two will be stellar. This movie is also based on a spectacular novel by Michael Crichton, so it has that going for it too. Oh, and it’s about crazed gorillas and laser guns.

10. The Woods (2006)
If we’re looking at this film in terms of horror, it’s not very frightening. It is, however, atmospheric and definitely a throw-back film in the vein of The House of the Devil, but still awful. The plot is simple but also boring: a pyromaniac teen is sent away to a private high school, where she is ostracized and abused, only to find out the school is actually a cover for a coven of witches. However, Bruce Campbell is said teen angst-queen’s father, and he is charming as always. 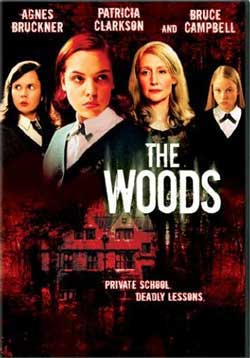 9. Sundown: the Vampire in Retreat (1990)
When I decided I wanted to write a list on only Bruce Campbell movies, I looked at his filmography and saw quite a few that I had never even heard of. Sundown: the Vampire in Retreat was one of them and I immediately put it at the top of my Netflix queue. And, honestly, I cannot recommend it enough. The film is a weird hybrid of comedy, horror, soap opera-drama, and good old fashioned Westerns. Yes, Westerns. And damn, it is so hilarious and, amazingly, well-acted that I can’t believe no one talks about it. I mean, Bruce is a descendant of Van Helsing, who’s come to a small desert town to investigate its citizens, particularly the man who bought the town, Jozek Mardulak, played by David Carradine. Despite his meddling, and goofy-fumbling leading man charm, an all-out war develops between two factions of the town. Oh, and I should add that Mardulak has opened a factory that specializes in making synthesized blood so that vampires can stop hunting humans—11 years before True Blood. 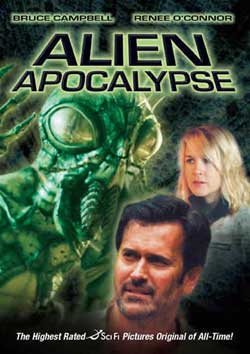 8. Alien Apocalypse (TV, 2005)
Bruce Campbell and Josh Becker have had a long working relationship. Like many of the films that have come from this partnership, Alien Apocalypse is another one of those so-bad-it’s-good movies. I mean, Bruce plays a scientist who goes on a 40-year journey into space only to find that earth has been taken over by aliens! That is nothing short of ridiculous genius. And then, Bruce is the only person who’s willing to rebel against the aliens, until the end, when he rallies everyone—including the president—to take a stand. It’s almost like the turning point of Army of Darkness, except instead of a Deadite army, Bruce is fighting aliens. (Aliens that look like they came from District 9, might I add. Both were made the same year. Coincidence? I don’t know; no one’s ever brought it up before.)

7. Escape from L.A. (1996)
This is not a horror film. I know, I know. But John Carpenter directed it, so that’s enough for me. Bruce Campbell was in this? Yes he was, as the Surgeon General of Beverly Hills. Awe-some.

6. Man with the Screaming Brain (2005)
Bruce Campbell is what I like to call a “hyphenate:” he’s an actor-producer-writer-director. This film was his directorial debut, and it is terribly amazing. Many would say amazingly terrible, but not me. Once you accept the film as a low-budget, Sci-Fi Channel (NOT SyFy, that’s the stupidest thing I’ve ever seen) funded horror-laughfest, it’s actually quite enjoyable and unique. Not to mention it’s set in Bulgaria and one of the stars gets turned into a robot.

5. BubbeHo-Tep (2002)
Bruce plays Elvis at 68, who teams up with Ozzie Davis to fight a mummy that’s been sucking the souls out of the residents of their east Texas rest home. No more explanation for greatness needed.

4. My Name is Bruce (2007)
From my list “13 Underrated Movies:” We all know that there is no way to adequately describe how awesome Bruce Campbell is. It’s like trying to number the stars in the sky, to describe how hot the sun is, or how bad Twilight is. You just can’t do it with any words in any language. But if you want to get the feeling for how awesome Bruce is, watch his movie. It doesn’t get more epic than this: a B movie making fun of B movies, directed by and starring the biggest B movie star of all time. Need I say more? Didn’t think so. But in case you’re still not sold: Bruce Campbell knows the meaning of life, but he’s not telling. Maybe you’ll see it in his movie 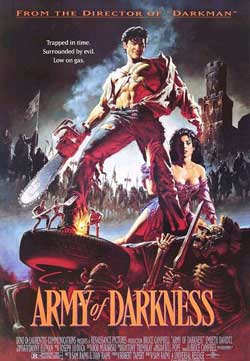 3. Army of Darkness (1992)
“All right you Primitive Screwheads, listen up! You see this? This… is my boomstick! The twelve-gauge double-barreled Remington. S-Mart’s top of the line. You can find this in the sporting goods department. That’s right; this sweet baby was made in Grand Rapids, Michigan. Retails for about a hundred and nine, ninety five. It’s got a walnut stock, cobalt blue steel, and a hair trigger. That’s right. Shop smart. Shop S-Mart. You got that?” Yes, we got that. And Bruce most definitely is the King.

2. Evil Dead II: Dead by Dawn (1987)
One of the original splatter films, this film was more camp than gore (although green and black colored blood flows… no, floods this film. Although: after all that happened in the first film, why did Ash take his girlfriend back to that cabin? No matter. The laughing room scene, Linda’s head in Ash’s lap, a possessed hand that is removed by chainsaw, and then said chainsaw mounted to Ash’s wrist as a new hand, more than make this movie a classic.