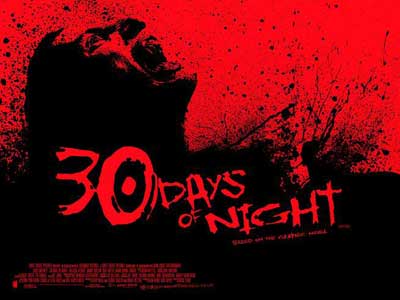 30 Days of Night (2007)
“There is no escape. No hope. Only hunger and pain.” Such is the state of the beast, and, fundamentally, vampires are beasts. Even Count Dracula, when he first appeared to the public, was a decrepit creature, not the suave nobleman we know and love today. 30 Days of Night is one of the best vampire films ever because it doesn’t flinch away from this fact. That arial shot showing the pure carnage of vampires vs. prey is horrifically beautiful. And can you believe that no one came up with the idea of setting a vampire movie where there’s no light for a prolonged amount of time? It seems like common sense, but Steve Niles was the first person to figure it out. Genius.

Let the Right One In (2008)
Of course this would show up on the list. What makes this movie great is that not only are the vampires children, but they’re mature. This allows Let the Right One In to explore the darker side of humanity, dealing with issues like bullying and pedophilia (you know Eli’s helper was only there because he wanted her—him?—sexually, right?). But this movie is more than just an artful, beautiful, fresh take on vampires. It’s much simpler than that. What makes this movie work is that it’s a story about a lonely boy who needed a friend and a girl who needed someone to take care of her. It speaks to us on a deeper level. It’s a movie about friendship and loyalty that just so happens to involve vampires. 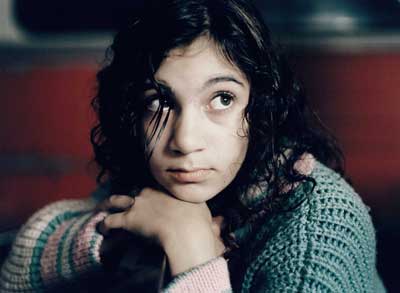 Shadow of the Vampire (2000)
Max Schreck played Count Orlock in Nosferatu a little too well. This movie gives us the answer: he really was a vampire. Willem Dafoe is superb as Schreck, who John Malkovich’s F.W. Marnau totes as the world’s greatest method actor. The entire crew believes this, even when Schreck tells them he is so old he can’t remember how he became a vampire, nor can he create more of his kind, and he snatches a bat out of the air mid-flight and sucks it dry. This film plays up the otherness of vampires, one of their biggest appeals, as Schreck becomes increasingly vile and threatening. It’s not scary, or particularly groundbreaking, but it’s entertaining and introduces viewers to the classic Nosferatu. 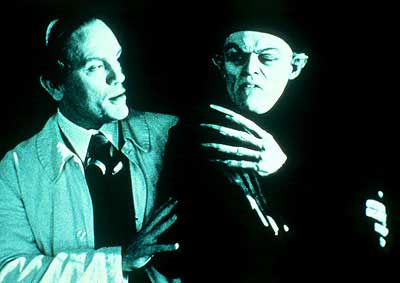 Cronos (1993)
There are no words to describe how brilliant Guillermo del Toro is. His love for vampires is well known: he made Blade cool, and his novel The Strain, written with Chuck Hogan asthe first in a trilogy, invented completely new vampire lore. But Cronos started it all. Del Toro’s first film, this movie, like Let the Right One In, has the simple focus of the love between a girl and her grandfather. It also brings us a new kind of vampire: the mechanical kind, a scarab-like device with spider legs and a singular needle-fang. In one of the greatest moments of vampire films, antiques dealer-turned bloodsucker Jesús Gris reawakens in an undertaker’s establishment with his lips sewn shut, a grisly reminder of mortal death. 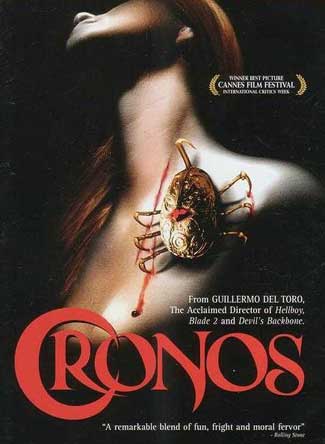 Interview With the Vampire (1994)
When it comes to modern vampire literature, Anne Rice is pretty much numero uno. That said, of the two adaptations made from her Vampire Chronicles, only one is actually good: Interview with the Vampire. Stuart Townsend is a much better Lestat than Tom Cruise, but that can’t redeem Queen of the Damned. That movie is terrible, plain and simple. This movie, however, is awesome. Directed by Neil Jordan, starring Brad Pitt, Tom Cruise, Antonio Banderas, Kirsten Dunst, and Stephen Rea, this vampire film covers nearly two centuries worth of killings, anger, theatre, and history. Who knew being a vampire was so dramatic? The most terrifying scene in this film is also the coolest: the members of the Paris vampire theatre kill Claudia and her newly-turned mother, and then Louis (Pitt) goes on a rampage and slaughters every vampire in the theatre. There’s fire, blood, and Stephen Rea gets cut in half diagonally. 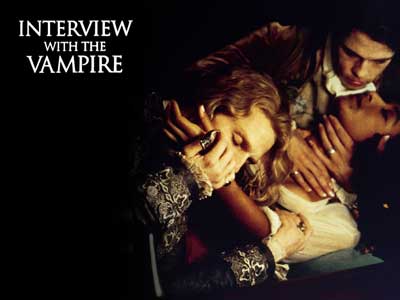 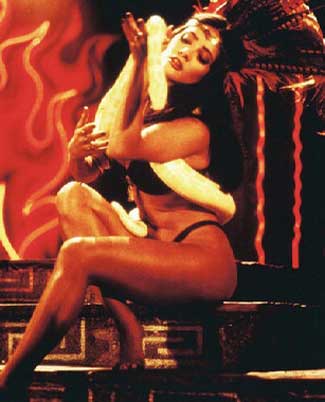 From Dusk Till Dawn (1996)
Quentin Tarantino, Tom Savini, and Salma Hayek dancing with a snake. Need I say more? OK, fine. This movie is noteworthy because it takes your classic crime movie (two robbers flee to Mexico, kidnapping a family along the way) and turns into a good old horror show. The fugitives hold up in a strip bar, where, it turns out, all the employees are vampires. To kill the bloodsuckers the remaining survivors find a whole arsenal of weapons, including a jackhammer, crossbow, shot gun, and holy water. Not necessarily your typical vampire-slaying tools, but kickass nonetheless. These vampires are also the most diverse and intense of any movie; each one is distinct and man, are they nasty.

Buffy the Vampire Slayer (1992)
Speaking of vampire slaying, Buffy the Vampire Slayer is a classic. I won’t say it’s superior to the TV series, because they are completely different entities, but the film does have Paul Reubens. The series was also much darker, where the film is along the lines of a horror comedy. Buffy is your typical cheerleader who loves shopping and hanging out with her friends until Donald Sutherland (!) approaches her and tells her that she is the Slayer, the Chosen One. During her training Buffy befriends Luke Perry, in a typecast role, who becomes the “damsel in distress” of the film. This is another brilliant aspect of the film: the movie isn’t just carefree; it’s also about gender role reversal. Deep for a cheerleader, right? I know. However, Rutger Hauer is the lead vampire, so don’t take things too seriously. With a cast like this, how can the movie be bad? 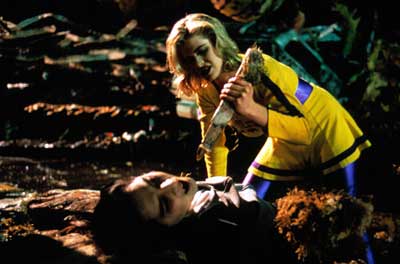 Dracula 2000 (2000)
Far too often movies that feature Dracula present him as the legendary nobleman from the 1800s, no matter the time the movie is set in. This is the first movie that successfully adapted Dracula into modern times. All the classic elements are here, including his three wives and irresistible charm (although what woman doesn’t swoon over Gerard Butler?). The stroke of genius in this film is that Dracula is revealed to be Judas Iscariot, which is the most convincing argument for how vampirism came about that I’ve ever seen. 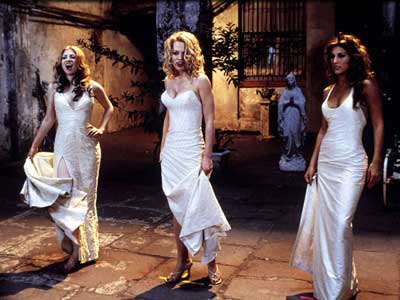 Bram Stoker’s Dracula (1992)
In truth, I don’t really like this movie all that much. (Keanu Reeves delivers a killing blow to most films.) However, the special effects are amazing and Gary Oldman’s portrayal of the Count is so phenomenal that I think this movie is a modern vampire classic. Although it does stray from the novel, this film sticks to the plot more closely than any other Dracula film, including our heroes chasing the Count back to Transylvania (the likened home of Vlad Dracúl, who the character is not actually based on). When we first see Dracula, he is old and decrepit, as he was in the novel; it is only later that he retains his youthfulness. Vampire movies are a cultural staple because the idea of immortality is fascinating, but this movie shows us that immortality is not always a good thing, especially when you spend eternity alone. 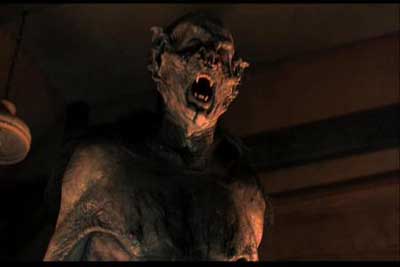 John Carpenter’s Vampires (1998)
This film, like From Dusk till Dawn, is another genre-bender. Whereas that movie was a crime-horror film, this is a horror-western like Near Dark. The film stars James Woods as Jack Crow, leader of a church-sanctioned team of vampire hunters, in a plot entered on Crow’s efforts to prevent a centuries-old cross from falling into the hands of Valek, a master vampire. Carpenter, one of the masters of horror, once told The Calgary Sun that, “My vampires are savage creatures. There isn’t a second of brooding loneliness in their existence. They’re too busy ripping and tearing humans apart.” However, Jack Crow is just as savage as the monsters he’s hunting. Unlike 30 Days of Night, where the vampires were beastly and the humans not, in this movie everyone’s bad. It’s one long rampage across the Wild Southwest. 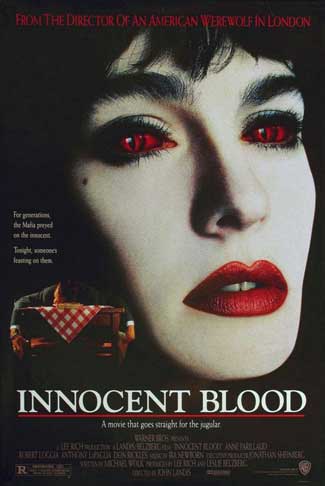 Innocent Blood (1992)
John Landis made a vampire movie? Yes, he did, and of course, like all his other films, it’s awesome. The plot is simple: a vampire finds herself against a legion of blood-suckers after biting an infamous crime boss. However, the only reason this crime boss was bitten is because our vampire, Marie, has limited her killings to the crime world. She only drains baddies. A precursor to Dexter? Not likely, but hey, I’ll plug that show whenever I get a chance. Par usual, Landis balances gore and thrills with humor.

Dracula: Pages from A Virgin’s Diary (2002)
If you haven’t seen this movie, get right over to Netflix. This film isn’t like your typical modern vampire films: it’s a silent movie, complete with title cards. Guy Maddin pays homage to silent film more gracefully than Shadow of the Vampire or even the remake of Nosferatu, but he also uses some modern effects. This movie is a perfect blend of new and old. It’s atmospheric, moody, and beautiful, for those of you who like a little are with your horror.

Thirst (2009)
The Korean title of this film is Bakjwi, which literally translated means “bat.” I love bats, they’re my favorite animal. Maybe that’s why I like this movie so much. This film focuses on a well-respected priest, Sang-hyun, whose faith is secretly failing because he hates living in a world with so much sadness, suffering, and death. He then volunteers to take part in an experiment to find a cure for the deadly Emmanuel Virus (EV—a take on bird flu, or swine flu, perhaps? Gotta love cultural parallels). The experiment fails disastrously and Sang-hyun is infected with the disease, although he makes a rapid recovery after receiving a blood transfusion. It would seem that the donor for his transfusion was a vampire because Sang-hyun soon finds himself needing blood and tempted by his bodily desires. The strength of this movie is that it is less about the horrors of a vampire killing people and more about the transformation of a man into a vampire. This is another film that humanizes vampires, one of the greatest innovations of the modern vampire film. 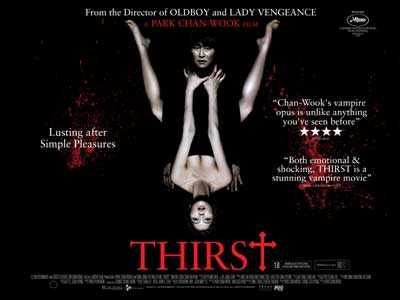