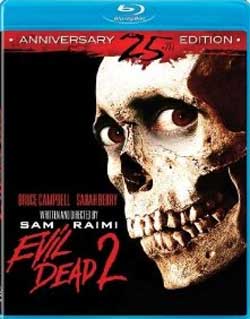 “A young man named Ash takes his girlfriend Linda to a secluded cabin in the woods where he plays back a professor’s tape recorded recitation of passages from the Book of the Dead. The spell calls up an evil force from the woods which turns Linda into a monstrous Deadite, and threatens to do the same to Ash. When the professor’s daughter and her entourage show up at the cabin, the night turns into a non-stop, grotesquely comic battle with chainsaw and shotgun on one side, demon horde and flying eyeball on the other.” (courtesy IMDB)

Precocious filmmaker Sam Raimi debuted at the Cannes Film Festival in 1983 where The Evil Dead (1981) sprouted fans, much the same way a possessed tree might sprout ever more thorny tendrils. It became a cult hit, spawned a similarly low-budgeted sequel entitled Evil Dead II Dead By Dawn (1989), and made Raimi a wunderkind among genre fans. The Evil Dead borrows heavily from horror-movie lore to create a terrifying scenario in a woodland cabin. Two teen couples are terrorised and hacked up when they accidentally reawaken long-dead evil spirits, often represented by a ground-level point-of-view camera zooming determinedly through the underbrush toward the cabin. 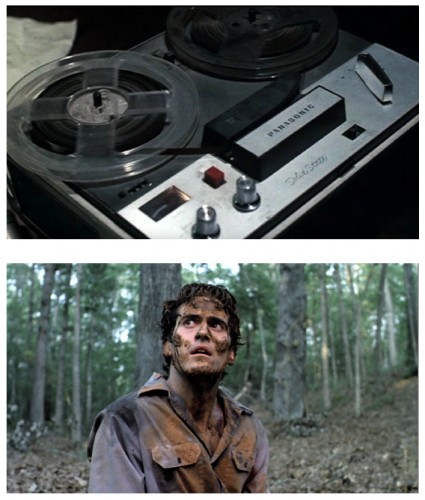 Raimi could have gone into the furniture business like his father, or become the Bra King of Michigan as his mother managed the largest bra shop in the world. Instead, his dad gave him an 8mm camera when he was a boy, and he experimented with it right up into college, where he organised film groups and developed a tight core of film-making friends who still work with him. His older brother, Ivan, co-wrote Darkman (1990) with him, and he gleefully put his younger brother, Ted Raimi, in a sweltering rubber suit for Evil Dead II, then buried him under a mound of dirt (it was 120 degrees outside, and he was 20 degrees warmer in the suit, so they had to keep airing him out). 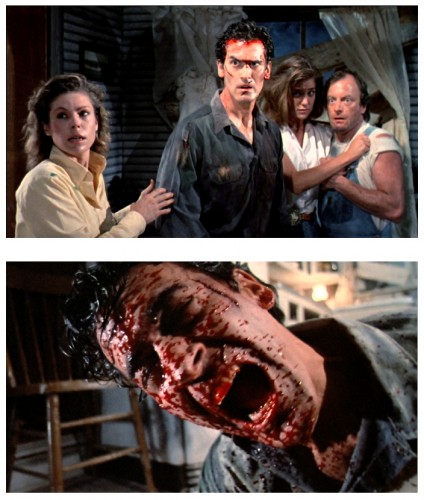 Raimi was so sure of The Evil Dead’s success, he began writing a follow-up while the first film was still in production, and enlisted Scott Spiegel, a member of his film-making group who had a flair for comedy. Spiegel, now a Hollywood screenwriter, made his own directorial debut with The Intruder (1989) based on his own script about a maniacal slasher who invades a supermarket. The resulting script for the sequel was titled Evil Dead II Army Of Darkness, dated 1985. Both Universal and 20th Century Fox passed on making the follow-up, but a deal was struck with Dino De Laurentiis to film the sequel on a budget of only US$3.7 million. With such a small budget to work with, Raimi planned to use stock footage from The Evil Dead to recount the original film’s plot in flashbacks. Unfortunately, he was unable to negotiate a favourable deal with Films Around The World to use footage from his own film, opting instead to re-film the action of the original. 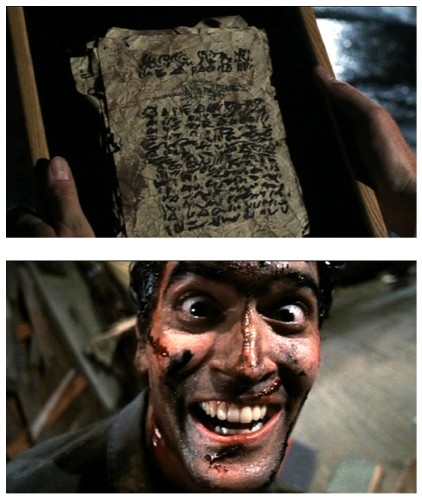 Scaling down his vision for the sequel, Raimi dropped the penultimate Thirteenth Century armies of the dead, saving them for the third film, and retitled the second film Dead By Dawn. Comic-book influences are very clear throughout all the Evil Dead films and show up again in the bigger-budgeted Darkman. As legend would have it, Raimi was rather disappointed by Tim Burton’s version of Batman (1989), and felt he could do better with an adaptation of The Shadow. Unfortunately, the movie rights for The Shadow were way out of Raimi’s price range, so he decided to create his own superhero. To cut a long story short, it was because of Darkman that Marvel Comics chose Raimi to direct the Spider-Man (2002) trilogy. 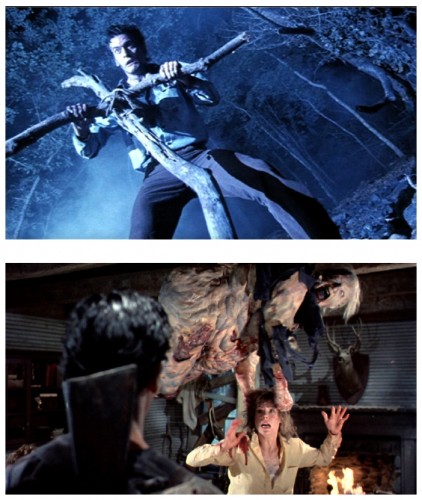 Raimi delights in making the mundane frightening where normal household implements become menacing – insinuating clocks, wild porch swings, mysterious cellar doors, changeable mirrors – and drew on everything from Night Of The Living Dead (1968) to The Beast With Five Fingers (1946) to The Three Stooges to make the witch’s brew that is the Evil Dead series. “You could say it’s a homage, or you could say I ripped them off. I just know that The Wizard Of Oz (1939) scared the grunt out of me. Action comedy was my first love, but no matter how badly you make horror movies, they always find a market, so that’s the safest way to attract investors. Putting in a bunch of scary things doesn’t work. What is scary is identifying with a character or situation, then putting him in danger, then building suspense, then punctuating it with a scare. Give them what they want, but not what they expect.” 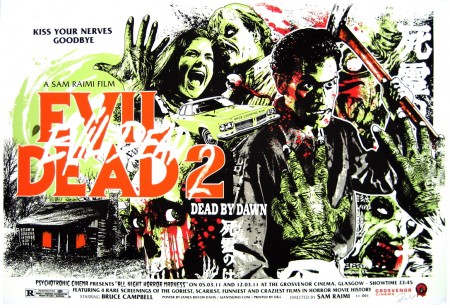 “For the Book Of The Dead, I used bits of Latin, Hebrew, pig Latin, kind of mushed together into fake words, like an ancient tongue. That stuff scares me. The abstract terror of pictures like The Tenant (1976) frightens me, when a character thinks everyone is trying to drive him insane, or abstractions of nightmarish imagery. Also the real subtle things, such as when you realise a character you’ve been following is very nasty and thinks very unpure and evil thoughts.” And it’s on that particularly evil thought I’d like to quickly thank The Washington Post and Video Magazine for assisting me in my research for this article, and graciously invite you to please join me again next week so I can poke you in the mind’s eye with another pointed stick from the faggot formerly known as Hollywoodland for…Horror News! Toodles! 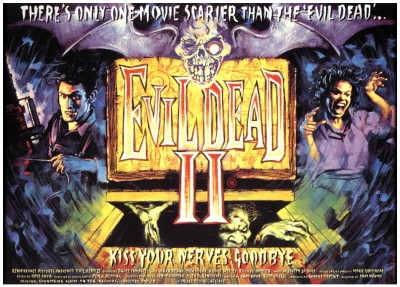