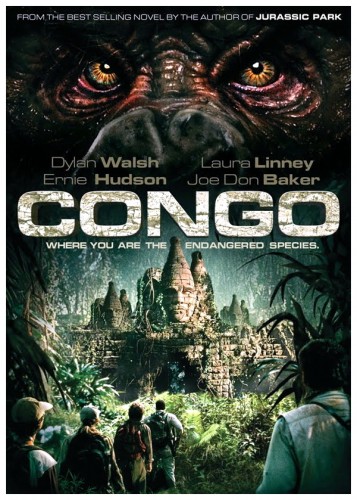 SYNOPSIS:
“A megalomaniac CEO sends his son into the dangerous African Congo on a quest for a source of diamonds large enough and pure enough to function as powerful laser communications transmitters (or is it laser weapons?). When contact is lost with his son and the team, his sometime daughter-in-law is sent after them. She is a former CIA operative and, accompanied by gee-whiz gadgetry and a few eccentric characters (including a mercenary, a researcher with a talking gorilla and a nutty Indiana-Jones-type looking for King Solomon’s Mines), sets out to rescue her former fiancé. What they all discover is that often what we most want turns out to be the source of our downfall.” (courtesy IMDB)

REVIEW:
Made at a time when virtually anything Michael Crichton scribbled on a napkin was snapped up for a movie or television series, Frank Marshall‘s jungle adventure parody wound up receiving an absolute drubbing from critics on its release. This may be unsurprising to some, as the screenplay was adapted by John Patrick Shanley, the writer-director behind the decidedly unfunny jungle adventure Joe Versus The Volcano (1990). Crichton complained bitterly of the changes Shanley made but, in Shanley’s defence, the tongue-in-cheek humour and the character of Herkermer Homolka (Tim Curry), a supposedly-rich Romanian who offers to finance the expedition (both Shanley additions) are actually two of the film’s major pluses. 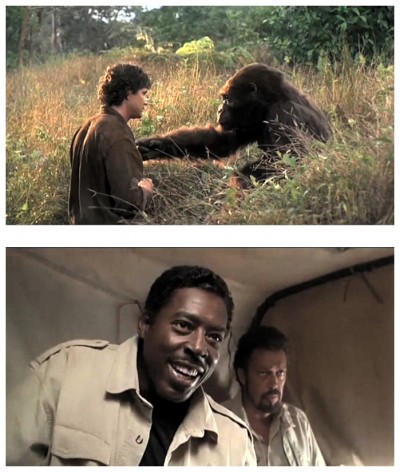 Producer Frank Yablans had been involved with Congo (1995) since its very inception, in fact Crichton had pitched his idea to him before he had even written the novel. Yablans liked the idea so much that he sold the film rights to 20th Century Fox in 1979, but forgot to tell Crichton, who published his novel the following year. The technology to create believable apes was not really available at that time, so the project was shelved indefinitely. More than a decade later, Crichton was so impressed with Stan Winston‘s animatronic dinosaurs in Jurassic Park (1993) that he decided to resurrect the project, and Kathleen Kennedy (producer on both films) suggested her husband Frank Marshall as director. A veteran producer of a hundred of the most popular films to ever come out of Hollywood, Marshall had only ever directed two full-length features before Congo: Arachnophobia (1990) and Alive (1993). 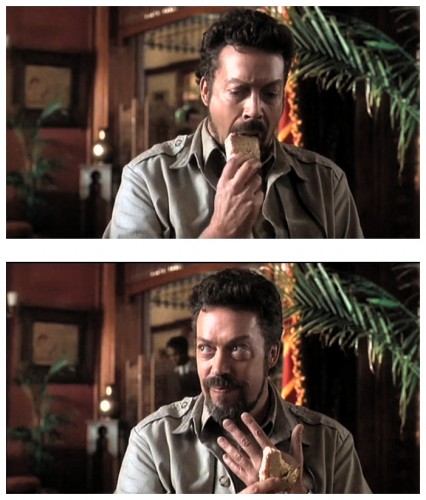 In an attempt to be part Jungle Jim (1948), part Gorillas In The Mist (1988), part Francis The Talking Mule (1950), it really does bite off more than it can chew, but Congo is actually a great deal of fun. Not perfect by any stretch of the imagination, but much better than its reputation would have you believe. Admittedly, the action sequences are pretty hopeless and the editing is rather lame, so it’s understandable that mainstream audiences didn’t like it, but Congo boasts a crazy sort of energy, a wacky Sam Raimi-esque sense of humour, a Bruce Campbell cameo, rampaging hippopotami, heat-seeking missiles, erupting volcanoes, lost cities and savage albino apes. The movie definitely aims to please. 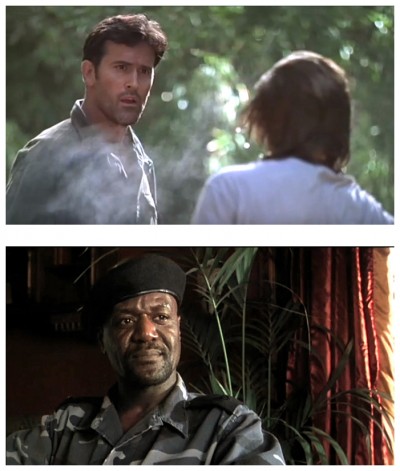 At the centre of the film, however, is an ape called Amy – Congo’s equivalent of Jar Jar Binks – who practically wrote the film off for a lot of viewers. Stan Winston‘s less-than-convincing talking ape looks terribly fake and is way too cute. But to dismiss Congo due to one crap gorilla would risk missing two of the ripest performances of the mid-nineties. One can always depend on Tim Curry to bring a large serving of ham to the table, but here he rides in straddling a pig the size of a buffalo. Looking like a bug-eyed Richard Branson after a lost weekend, Curry is superb as the mysterious Romanian adventurer, mangling vowels, mugging ceaselessly and fearlessly stealing every scene he’s in. Professing to be philanthropic, he practically drools every time someone mentions the lost city of Zinj and King Solomon’s mines. His performance is so over-the-top it’s like he’s auditioning for the role of Doctor Smith in Lost In Space. 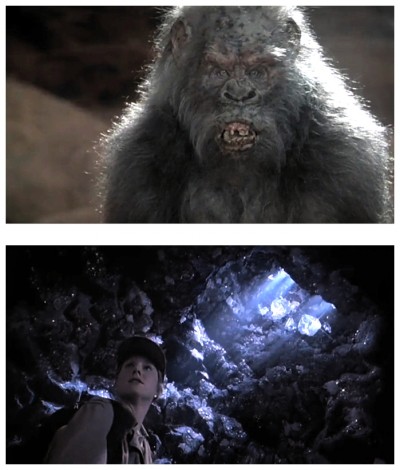 Despite his wild overacting, Curry is matched by Ernie Hudson playing the expedition’s guide Monroe Kelly. Boasting a plummy English accent that would make Stewart Granger jealous, the droll Kelly describes himself as a great white hunter who just happens to be black. When he and sensitive ape specialist Peter Elliot (Dylan Walsh) are confronted by a ferocious ape, the fearless Monroe firmly stresses to neither show fear nor move a muscle. The snarling ape bounds up to Elliot’s sweaty face and, after a tense moment, eventually backs away. “Good work!” shouts Monroe from a behind a bush some twenty metres behind. Also featured in the cast is Laura Linney and Grant Heslov, but the two Joes – supreme character actors Joe Don Baker and Joe Pantoliano – are sadly underused. 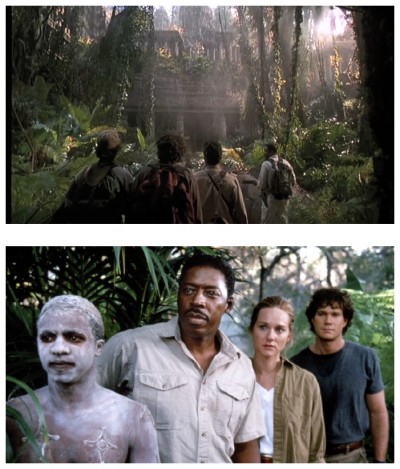 The ‘diamonds’ used for the scenes during the climax of the movie were actually Herkimer diamonds borrowed from the Herkimer Diamond Mines of Middleville in New York. They are actually double-terminated (two-ended) quartz crystals that are found in only two places in the entire world. They were the only gems that would look enough like diamonds and be that large. The diamond that’s seen thrown out of the balloon at the end of the film was lost, and so could not be returned to Herkimer Diamond Mines. Don’t be concerned, they could certainly afford it – with a budget of US$50 million, Congo went on to gross more than US$150 million worldwide but, despite being a box-office hit, the critical reaction was almost universally negative. 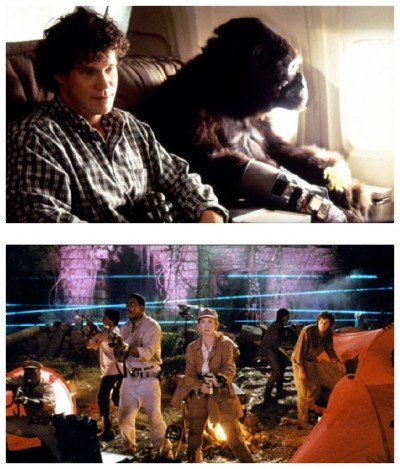 A significant cause of disappointment among the novel’s fans was that the gorillas were obviously puppets and costumed humans with noticeable gaps in the costumes and around the necks. The late great Roger Ebert was one of Congo’s few champions, declaring Congo as a splendid example of a genre no longer in fashion (the jungle adventure story), destined to be scorned by false sophisticates but relished by real sophisticates. I’m not exactly sure what he meant but, as a goofy Saturday matinee romp, Congo is certainly ‘da bomb’! Do kids still say that? Well, I’m all about bombs! And it’s with that rather explosive notion in mind I’ll ask you to please join me again next week when I have the opportunity to sterilise you with fear during another terror-filled excursion to the dark side of Hollywoodland for…Horror News! Toodles! 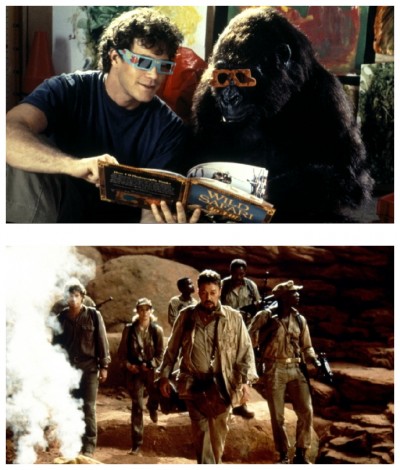