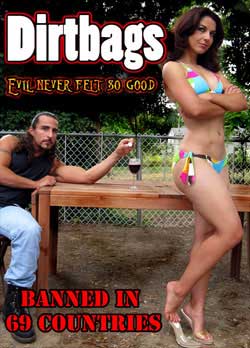 Bill Zebub is at it again, his latest release is titled “Dirtbags” which actually is a remake of his movie from 2002….. re-shot and re-written. I watched the film trying to decide “how” to review it as it seemed to be composed of several comedic short clips. You have to watch it for the sum of its parts that contribute to the whole.

First that stood out…. was the clip on the crack lovin negro that while your supposed to “not” laugh…. can’t help but too, due to the films overemphasis of features and ghetto slang. A health club owner makes gay passes at his employee while at the same time trying to deny he is gay…while wearing a skirt. dFor instance when he sends him on a errand to grab a cherry latte and is force to deal with a overbearing counter salesman that subjects him to oral sex in fear of being reported. Ya, there’s alot of gay humor that gets passed around but in ways that makes fun of gayness to the extreme…great stuff! Though the highlight comes with the scene of the gay pizza man battle.

Other bits involved the subject of roofies, creating them and taking advantage of poolside women. Then there’s the clips of naked chicks tied to a cross and videotaped from a found dvd left in the public bathroom. Kind of a hodge podge of weirdness that is all intended for its dirty slap stick value. The rhythm skips around a bit with different episodes all intertwining into this messed up world that Bill lives in. One of the funnier narrations is when Bill presents his essay to speech class about why Santa doesn’t exist and should be exposed to children.

Normally we don’t review films on a horror site that don’t have much horror to them, however Bill Zebub has created a certain underground party niche that crosses over into his other films with horror related content. This may not be one of his more “horror” driven ones but its still worth checking out. If you are just coming into one of his films, his previous works offer a certain something that’s hard to describe ….maybe low budget, crude, weird and wacky all rolled in one might fit the bill but its these guerrilla shot productions that provide a needed break from studio efforts especially when they are not up to par. Bill hits you with the occasional “clerks” type approach with quick quips, comebacks and funny little skit scenarios that I’m sure you’ll enjoy on some level.

I’ve run across a few like filmmakers that take the independently-nichey-but -done-on-there-own-terms-road and they deserve a place in reviews as much as any “Halloweeny-JennfiersBody-or-lets-take-a-1970s-film-and-remake-it” studio out there.

Hopefully this review will reach a few people looking for that different quirky mix to brighten up there viewing circles.