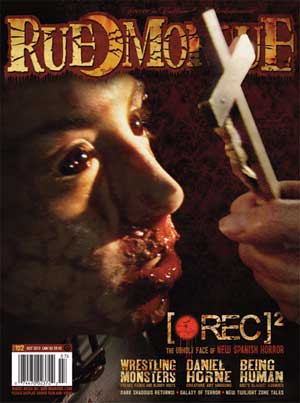 If that possessed demon on the cover doesn’t get you motivated for REC2 I don’t know what will? The cover calls out the “unholy face of new Spanish Horror” and I for one am digging this fresh direction.

REC 1 thrilled audiences and now REC 2 comes at us with even greater fright filled horror scares. 6 pages dedicated to this new freak show of a film comes at you with all sorts of behind the scenes details. Paco, who is just getting wind of his quickly rising fame as a horror director to watch out for comments about ut his small but mighty masterpieces. If that isn’t enough Rue Morgue gives him a special page that features several more of his past titles. I for one am a fan of the film “Darkness” and have already got a few more of the titles on standby. Will this be the year for REC2, I think so….. having received an advance copy of the film you can read our review of it here… great stuff folks!!

Dread lines also seems to meet my current need of latest interest. This is why it caught my attention when it calls out 2 new films to arrive from the Serbian cinema realms. 2 titles to watch for: “A Serbian Film” and “Life and Death of a P*rno Gang”. Now it may be just more hype but I’m happy to indulge into these titles to determine just that fact. Fantasia 2010 has grown leaps and bounds with all kinds of horror goods and a few nasty delights in store for the masses….. just what the doctor ordered!

Additionally a small coverage on women filmmakers is given kudos with a new festival and some new titles to boot. Yes, its true, I can verify the claims. Women are really churning out some great twisted horror…so don’t knock em and checkout some titles. “Viscera” is one of the latest guilty pleasures that features some great new releases.

I don’t usually call out adverts, but to my surprise just as I was reading about a great new sick title from Synapse, did it arrive at my doorstep. “Graphic Sexual Horror” is the title….. and it might just be the does of madness I’ve been craving for!

Wrestlers have always been a bit menacing on screen or off. Its a good thing that the horror community recognizes that fact and has made some pretty interesting films with some of these massive individuals. Homage to the wicked go out in a cool article featuring the horror based wrestlers and madmen for that matter.

“The Canvas that cannot Hold them” is a special feature on the artwork of Daniel Horne, who has contributed his old school classic style to over 400 book covers. The article features a nice showcase of his paintings, sculptures and masks created over the years. A dedicated monster kid Horne give us some insight into his dedication to the old creeps rather than partaking in the modern slasher and mass murder angle.

“Gloomy Roomies” talks about a new series called “Being Human” which features a combo vampire, werewolf and ghost team. I believe this may be the year that really pulls out all the horror elements into regular broadcasting. We’ll see!

That’s it for this reading session, don’t forget to check out the 3rd act of issue 102 which features alot of great reviews on upcoming horror titles and goodz. Damn there is still about 10 of these titles I need to get to myself……well back to the viewing circle….chow