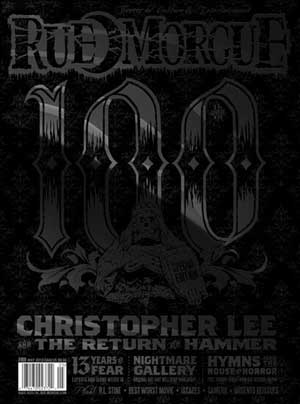 When a horror magazine can proudly display 100th issue in this sorrid economy without having to close the doors first…it’s a really good sign. Not only do consumers lack the funds to shell out $10 an issue but are wondering where there next t meal may come from. Though the horror genre has always been strong thru tough times. It says alot for the culture and the interest. Rue Morgue has of course gone thru some lineup changes, but they are still running strong…so happy 100th RM!

With the excitement of hitting an 100th issue also comes a need for a retro look at things horror since its inception. RM has featured this under the title “13 Years of Fear” with a historical overview, a philosophical look at change and the opinions of industry experts on where we’ve come from and where we’re going. With the studios pressing Blue ray on us, 3D, 3D in theatres….its apparent that they are forcing a change that bring them in greater revenue. The DVD format won’t disappear but it may get 2nd fiddle eventually on new releases. The Internet has changed the genre….including sites such as ours who is able to reach alot of folks really quickly to new mediums being introduced to support that. The article covers the intro to torture p*rn, the Asian influence and movement and the perception of what is acceptable now rather than what isn’t. It’s certainly true that the horror culture has grown and is more open to darker things. We even get a small article on industry opinions on where horror is headed in the future.

“Headlines” informs us on the almost silly nature of Indian film promoters who offer cash or medical attention to those who can sit thru film releases. A clever gimmick, but that approach would fail highly in our tough skinned US market. Though its still interesting to hear about these kind of things that drive a little more excitement into the genre.

“A Nightmare Gallery” – gives a small visual eye candy section featuring a variety of different horror artists interpreting there take on nightmares. “Hymns from the House of Horror” offers a cool addition for fans. Straight from Rue Morgue radio you can download a special 100th year tribute horror music collection put together by a nice collection of horror music artists. The official download location is at www.rue-morgue.com

“Royal Blood” Christopher Lee”, A tribute and overview of an early iconic horror name in days past. Christopher Lee became one of the beacons for the Hammer films and has served us well with his decades of acting talent. Those were different times that had fewer horror top names…..Lee was right there in the frontline giving us gaggles of performance after performance. This 10-12 page overview really hits home with historical goods and Hammer lore. Much to my own education, I learned about Lee’s early days and his struggle with Hollywood finding a place within their ranks. Though Lee’s tall and foreign look provided the perfect Dracula figure to provide the pathway for several more films in the horror vein. Besides his stellar performance in Wicker Man, we learn of new news on a Wicker Man sequel.

R’ L Stine is a name all too familiar in the genre especially for young children and teens. Author of the popular series “Goosebumps” gives an interview about his prolific talent for churning out scary but appropriate reads for the younger audiences. A great piece on an area sometimes overlooked in our rush for the next shocking thing on the markets today.

Troll 2 is honored with a 2 page feature on this absurdly bad little film that has spawned a brand new film focused on the making of. Called the “Best Worst Movie” , I’m willing to bet that Troll 2 will soon enjoy a renewed place in horror history that nobody saw coming. Yes, even the bad films sometimes are a good thing!

A generous helping of review and product news finishes out the issue with a special mention to an ad for the release of “Dark Night of the Scarecrow” finally coming to DVD. Good things come to those who wait…..! Over and out!