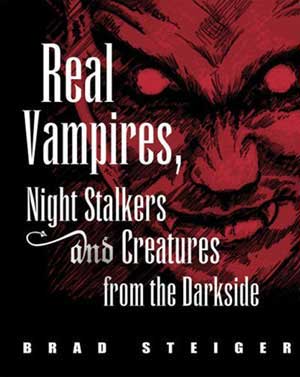 While there are several books about vampires on the market, its always good to come across one that doesn’t just focus on the cinema version vampires. Brad Steiger’s latest book is called “Real Vampires, Night Stalkers, and creatures from the Dark side”. Looking at the book’s intro its easy to see that you are in goods hands with Brad authoring more than 170 book on like materials. In short his dedication pays off as his material comes across with a sense of confidence and background that makes for an exciting read.

I began to read thru chapters expecting a certain familiarity with other materials I have read. What really stood out was that Brad had taken on folklore, history, myths and legends into a very to the point encyclopedia format of all sorts of evil dwellers. Primarily those who had something to do with blood, coffins, drinking blood or things you might associate with vampires but not always so directly.

Case in point, subjects like Elizabeth Bathory, Ed Gein and the Spanish Inquisition don’t usually fall into straight vampire books. Well the first hint is in the title of the book that really is more focused on exposing a certain penchant for evil among historical cases and associations. This also makes for a dynamic read that in shorts says…… here is where some of these associations may have come from but on a lesser known scale.

One story that stands out is the “woman who collected coffins”. Vera Renczi was a mentally unstable socialite who took to lovers but couldn’t bear to see them fall into another’s arms. Her resolution came in the form of killing off over 30 men and placing them in coffins in her basement. Not a vampire per se, but a good story for things involving the keeping of dead in coffins for nefarious reasons. The Spanish inquisition is well known and well documented in cinema. Though as horrendous as it may seem its all based on truth in a time when paranoia, religion and the idea of the devil and evil was mixed in a bad ignorant way. This points to truth within our times that documents when religion was built on corruption, personal gain and the influence of torture to wrongly accuse hundred of lives.

Satanism makes an appearance. And as always not in a favorable one. Much has been documented about reported accounts. A few of these are explained within. Brad also educates by point out the difference between satanism and a few other cult like sects.

Brad goes on to showcase serial killer incidents that also believed they were either using blood as a cleansing spiritual tool or for the interest if saving souls from evil. Proving also that mankind can so easily turn a position of power and sacredness into its own device. The book covers alot of supernatural areas that would be an excellent read for fans of tv shows like “Supernatural” or “Sanctuary”.

What I found myself especially drawn to was the effort put into research on these denizen (if you will). Shadow creatures, ghosts, bat women, ghouls, possessions that claim to be from creatures and the lost goes on. Rather than so much a creature encyclopedia, it is really stories and essays on real or close to real events that helped shape the subject matter of so many familiar cinematic creations.

While further chapters attempt to bridge the gaps, it delves into the regions of gray men, Ouija boards, black eyed beings, and ghost tales. All point to episodes, accounts or tales that have survived up till today. Whatever these elements that lurk in dark places want, they have succeeded in inspiring the masses whether thru fiction or non. Brad creates a very compelling book that feels much like sitting around a campfire listening to him entertain and amaze Damn good book – check it out!