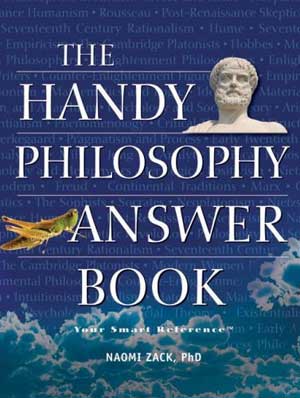 A book of philosophy the how, when and where’s. Philosophy has crossed over into every culture and every time period with full force that originates back to the days when thinking men were held in high regard as citizens. Socrates, Plato and many others have contributed to some of man’s greatest questioning and thought processes that were studied forward from there inception. This book is simply called “The Handy Philosophy Answer Book”. The book is authored by Naomi Zack who shows a great love for his profession. In fact, the thing that drew me to this collection was the way it is organized for the readers. Each thought or philosophical segment is posed as a question and answer scenario. This in itself makes it very easy to find answers, subject matters and focus in on areas of interest.

Another bonus is that the book is very linear with time periods and styles of philosophy. All the greats are included: Parmendides, Prodicus, Socrates, Plato, Aristotle, Pyyrho, Themistocles, Aquinas, Gassendi, Bacon, Benjamin, Russell, Ayer and a fine collection of several other great thinkers of our age. The book may seem an unlikely choice for a horror review site ….though I tend to believe that some of the greatest horror films of our time were based on philosophical ideas as a root…whether it be literal or suggested.

Many times the book asks “Who was….” and answers appropriately about the person and/or contribution he has made. If the philosopher has contributed a great deal then he is quoted and introduced in more Q & A sections that bring his thoughts into protective. Early on one might notice the absence of female philosophers at least partly. This is explained that in the older days of thinking, women were often kept from philosophical circles and required to partake in more trivial house hold tasks. This of course changed over the periods but with its roots in this rhythm you’ll find more male philosophy than female contributions.

As most of the books from Ink press, this book is no exception when it comes to a healthy glossary for locating areas of interest or specific individuals. I found interest in Marquis de Sade who is summarized in detail. Many such films being made regarding his poetry and philosophy that were deemed too perverted and extreme for civil thinking. Other philosophers are introduced thru there views and opinions. Though it doesn’t tire as each is kept to a minimum amount of info. This makes it easy to flip thru to say “Who was Karl Marx?” or “What is process philosophy?”. Q&A formats range from broad topics to more precise, though all are kept to the point with just enough info to wet your appetite. “Who has claimed animals have rights” might pop put at you or how about the age old argument of if a tree falls in a forest and no one hears….does it exist? Do you want to know about Voltaire’s religious views?…or maybe who influenced George Berkeley? How about more generalized topics like “what is a meme?” or maybe the “philosophy of technology”? Yep, its full collection of thinkers, theories and thoughts. Time periods move us thru the past and into the here and now. Astute readers will recognize the origin of philosophy really originating mostly from the past and adhering to alot of what was believed in a simpler time.

The author introduces the book on a very welcoming note. As he puts it, you can read it front to back or simply browse to your areas of interest. He also mentions that you may come out of this read with a whole new perspective of philosophy. Well reading thru myself, I have to agree. A very nice addition to libraries and one of the better book from Ink presses “answer book” collection!