Takashi Miike is one bad-ass little man, and he is one of the most prolific filmmakers in all of cinematic history. A typical year will have him releasing roughly 5 movies, which is absolutely astonishing when you consider that he’s working across all genres, all formats and in multiple languages. His cinematic eye is something that’s inspirational and influential, and he is seemingly always right on the pulse of what’s going to make people cringe, squeal and cheer next. So, in no particular order (although some pesky numbers will be present), here are ten Miike movies that I’d consider essential viewing in trying to understand what makes him so special.

1) AUDITION:
This movie requires a ton of patience, as it has one of the longest 1st acts I’ve ever endured in watching a regular, feature-length film. Make it to that second act, however, and find yourself watching one of the most artfully malicious movies ever made, a tremendous film that gets so painfully deep beneath the skin that it simply refuses to be forgotten. Love, loss, and love that you’d wish you’d lost; add some ruthless torture to that formula, and you have what is arguably the most recognizable Japanese horror film around the world. 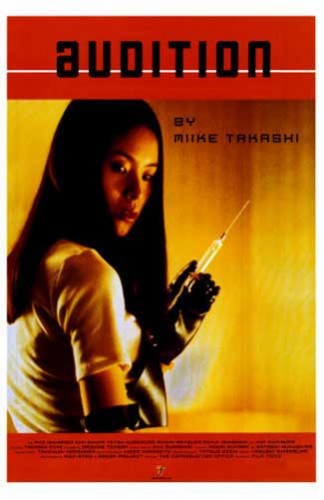 2) HAPPINESS OF THE KATAKURIS:
It’s a zombie musical comedy. It’s an Asian movie with humor that translates well beyond that of a broad, physical comedy. The poor Katakuris have a hotel that has a problem of ensuring that all of its guests die. As far as zombie movies go, it’s as light-yet-gross as DEAD ALIVE, which is a major feat, and it’s ultimately rather charming. 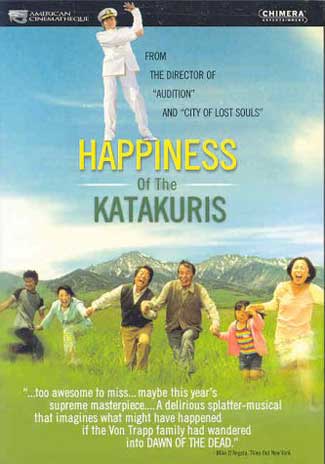 3) IMPRINT:
This movie, on the other hand, is about as repulsive and painful a movie as I’ve ever seen. It’s so mean-spirited, miserable, and just plain sad that it doesn’t scream to be watched again. It does get watched again, though, shown to friends as the newest and most depraved thing in a horror fan’s collection. And eventually, the stark beauty of many of the scene compositions and the haunting, slowly lyrical pace of the movie can inspire repeat viewings all on their own. It’s not one for people who are squeamish about, you know, aborted fetuses and such, but for the 10 or 20 people left, it’s essentially a very dark art film. 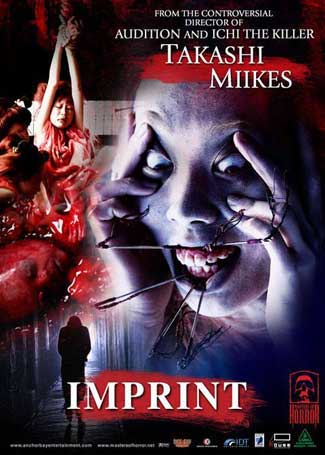 4) IZO :
This movie is absolutely exhausting. Quite frankly, it’s 2 hours of fighting. It’s 2 hours of endless battle, killing, enduring, suffering and rage. It’s also a very interesting contemplation on what a life beyond death might hold for us, what karma and Heaven or Hell might be like. For all of the fighting, it’s actually a relatively cerebral movie, which makes it really interesting and worth a view in my estimation. 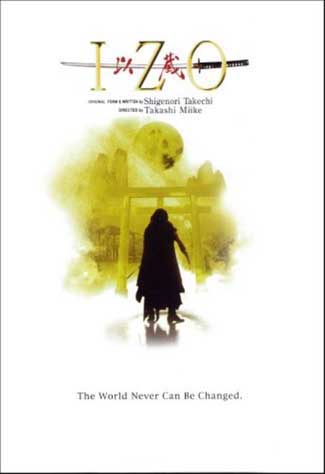 5) ICHI THE KILLER:
Whereas AUDITION might be amongst the most recognizable J-Horror films in the world, ICHI THE KILLER is almost certainly the movie that most quickly comes to mind when anyone who knows even a little bit about Miike is asked about the films he’s done. Ultra-violent is too soft for this movie, which is rude, stylish, gory beyond belief and absolutely insane. I actually don’t even like the movie, but it’s essential viewing if one wants to understand Miike’s almost-compulsory need to break every taboo in the world. 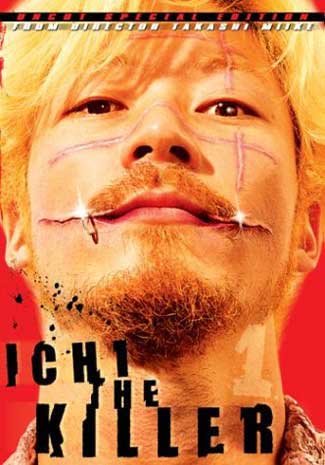 6) GOZU:
Ho-ho-holy sh*t! I’ve seen this movie three full times now, and seen bits of it many times since, and I still have no idea what to make of it. On the surface, it’s a painfully basic Yakuza story, and Miike’s a pro when it comes to the filmic exploits of the Yakuza. But it’s about so wildly much more that labeling it a simple crime story doesn’t even begin to do it justice. Hell, even calling it your typical Miike movie doesn’t help describe exactly what it is. All I can really say is “get Netflix” or “buy the damned movie,” because it will take dedication and multiples of multiple viewings to “get” GOZU, and even when that happens, I still have the feeling that you, I, we…we’re only getting a part. This movie is genius in action in a way that’s not boring like Warhol or completely inaccessible like some of David Lynch’s later work. It’s entertaining, exciting, and insane. And it works. Somehow, the damned thing works! 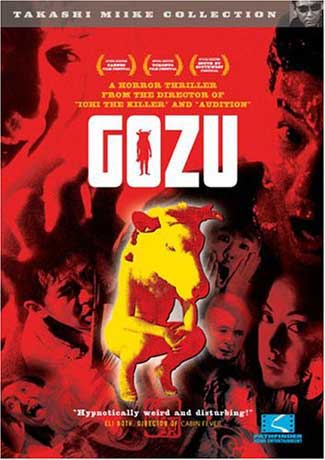 7) The DEAD OR ALIVE Films:
I felt it would be a bit of cheating to list each of these individually, despite the fact that they’re all movies that have different feels and approaches, despite the interconnectivity and the shared banner of the DEAD OR ALIVE franchise. If you’re looking for crazy, ultra-violent Yakuza goodness, this is precisely where Takashi Miike is your hook-up. Sex, violence, deviant sex and deviant violence abound throughout, and for these films, really, one probably isn’t looking for a whole lot more. If you’re looking for a party flick where no one gives a sh*t about the subtitles and just wants to occasionally look at the screen and say “what the f*ck was that?” then these are your movies. It’s crime, Miike-style, and not as “refined” as some of his later work…but that’s definitely a huge part of these films’ charm. It’s hard to say whether someone new to Miike should start with these films–I didn’t, and don’t feel as though it mattered–but they are essential to understanding his roots and why he was ultimately able to garner the worldwide success he did. 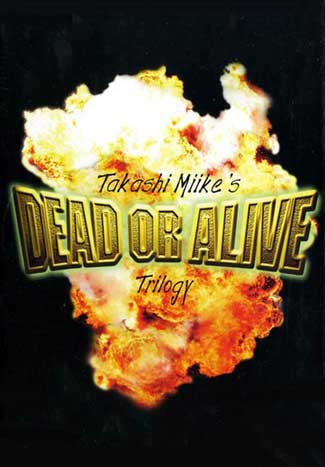 8) Visitor Q:
Oh, sweet , sweet VISITOR Q. No list regarding Miike-san would be complete without this work of his, which I’ve read as being a Japanese answer to Todd Solondz’ film HAPPINESS. I suppose I see it, but HAPPINESS has this strange suburban plainness to it that makes it work for a U.S. audience. It feels invasive because it could be at least an aspect of our lives. If the same can be honestly said for VISITOR Q in your home, please get the f*ck away from everyone you know and banish yourself for the sake of humanity. While both movies are about dysfunctional families, one has the banality of small-life private miseries, and one has an angel. Both have semen, but one has an angel. You decide which, and then tell me which one’s closer to the edge. 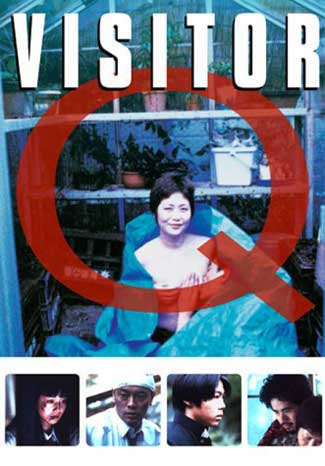 9) FUDOH: THE NEW GENERATION:
This was my introduction to Takashi Miike’s work, something I saw around the same time as I saw John Woo’s BULLET IN THE HEAD, and while both are Asian crime movies, and while BULLET IN THE HEAD had the iconic image that resided as a poster on my bedroom wall for years, it was FUDOH that left the most scars. A classic in ultra-violent Asian crime films, it set a course for which Miike would become legendary with the aforementioned DEAD OR ALIVE trilogy and was gorier than I could even handle at the time…a time when the pudding/earring scene from Peter Jackson’s DEAD ALIVE was still making my physically ill. I’m not and never have been huge on Yakuza films, quite honestly, but if Miike makes it, I’ll give it a shot, and this is among those first Asian movies that opened my eyes to the world of foreign cinema at large. A quick shout-out to Zane at Stuart, FL’s Groovy Movies A-Go-Go for popping my foreign flick cherry with this flick and Jean-Pierre Jeunet’s THE CITY OF LOST CHILDREN. I wouldn’t be the sick bastard I am today without that guy, and without Miike’s vagina gun-toter in FUDOH, for that matter! 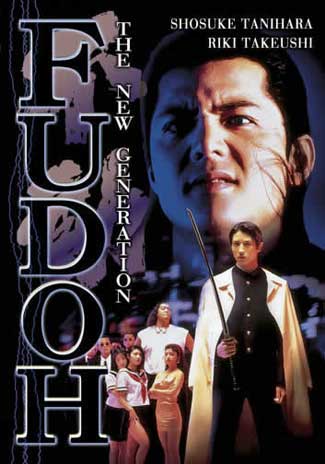 10) THE GREAT YOKAI WAR:
I saved this for last on the list because it’s so radically different from the rest of Miike’s work…or is it? As I mentioned at the beginning of this piece, Miike is well-known for being pretty much the hardest-working director in film today, regularly pumping out anywhere from three to five films a year, spanning multiple genres, budgets and formats. He’ll make a mini-series, follow it up with a gory Yakuza flick, and then pull out something like AUDITION that floors everyone who sees it. Then, he’ll come out with a flick that entirely defies the concept of genre, like THE HAPPINESS OF THE KATAKURIS. 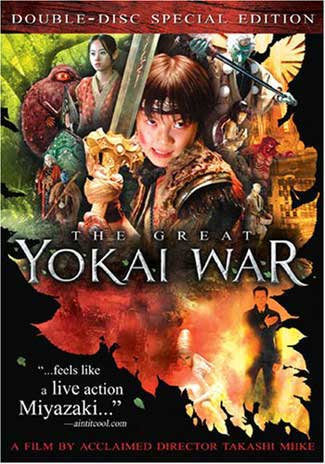 THE GREAT YOKAI WAR follows in that tradition, except that it’s essentially a kid’s movie. It’s not fully for bright-eyed little scamps who are just graduating from Barney to Sesame Street (or is it the other way around? I haven’t a clue!), with a typical story of a young, inept and unprepared child suddenly thrust into a great battle with a demon who clearly outmatches him. In that sense, it has a lot of a Harry Potter or Lord of the Rings vibe to it, except that it feels a lot more sincere than those big, glossy movies with marketing monsters and impeccable special effects all around them. This movie, in one word, feels “authentic,” which is something rather special when talking about a shoki of sorts, or “demon-queller.”

It’s a movie that feels a little Jim Henson-ish, a little fantastical and strangely moral. And most of all, it’s a movie that doesn’t feel like a Takashi Miike film. He spends years making all sorts of films, violent and challenging works that demand the full attention of his audiences, and while this movie does demand that attention, his approach is completely different. While all of Miike’s movies has a certain appealing cinematic aesthetic to them, this is the first movie of all of his work that I’ve seen that truly feels “beautiful.” Thus, it has to earn a spot on this list, if only to prove as counterpoint to all of the other wildly sick sh*t that has come before it on this litany of cinematic pain!

So that’s Takashi Miike at a glance. If you see any of these and feel interested enough to view his entire library, be prepared to sit through a lot of movies, and also be prepared to get very frustrated, as many of his work–especially his Japanese television work–is very difficult to locate. And I’ll be the first to say that not all of his films are worth seeing; as I mentioned, I didn’t like ICHI THE KILLER at all, and probably wouldn’t have even listed it here, were it not so influential and recognizable as one of his major works. The Internet Movie Database currently has Miike-san’s total directorial count at 81 films, so please allow me to be the first to wish you the best of luck in seeing all of them. And then, please send me the address of the sanitarium in which you’ll be placed, because I’m sure I’ll feel partially responsible for your psychosis and will want to send you CARE packages full of exotic candies. After this, trust me: it’s the least I can do.

Thanks for reading, and happy viewing!