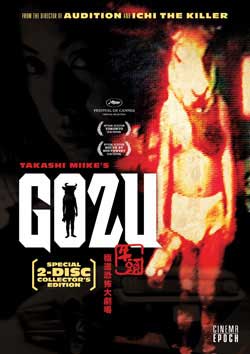 Minami (Hideki Sone) mistakenly kills a gangster associate of his named Brother. Almost as soon as the murder takes place, the body of the deceased man is gone, prompting Minami to conduct a search. While looking, he finds a mysterious isolated hotel where he decides to take a rest. Not only are the front desk clerks a bit strange, but even the ambiance feels unusual. Minami soon realizes he may have gotten more than he bargained for. …

First of all I’m sure everyone knows this is a Takashi Miike movie and for me at least it’s hard to review one of his films without mentioning his other cinema beast creations. I had heard how unbelievably violent , sexually explicit , and downright bizarre his films were and the first one I saw was AUDITION. It’s totally not a balls to the wall crazy ass network of sick images and mangled movie atrocity but it is good and I immediately recognized the raw power Miike wields as a director.

GOZU is nothing like AUDITION but it is like AUDITION in that it’s not covered in gore and swimming in sexual deviance , well it does wade kneedeep in perverted mire and it is certainly bizarre.

GOZU , technically could be called a yakuza picture and travels into the surreal teritory of David Lynch and Cronenberg but it can also be called pretty damn boring at times. It’s about two yakuza gangsters , symbolic brothers , Ozaki and Minami and I gotta mention the performances of Sho Aikawa ( Ozaki) and Hideki Sone (Minami). Sho Aikawa without going over the top or even having that much screentime really seems crazy and disturbed and Hideki Sone really made me feel how he was caught in the middle of his loyalties between his brother Ozaki and the orders of his boss and he is a likeable guy even though he is a gangster.

Ozaki is crazy , about to suffer a complete mental breakdown. The first scen illustrates this and made me cringe the first time I saw it and the second time I saw GOZU I knew it was coming and anticipated when it would happen but I still got a little gutwrench before it happened but when it did happen I actually giggled a little but felt bad about it. But it’s so absurd I shouldn’t feel to bad.

So the boss orders Minami to kill Ozaki and dispose the body at a yakuza dumpsite in some small town but Ozaki once saved Minamis life but Minami can’t go against the orders of his boss can he?

When they get to the town Minami goes to a restaurant and after encountering some strange and annoying characters goes back to the car to find Ozaki gone. So the middle of the movie is Minami running around town looking for Ozaki but that’s not what GOZU is really about. To me it’s about the strange and frustrating occurences that happen to Minami as he looks for his brother and the mood Takashi Miike creates around him. But I can’t help but bring up the interview I read with Miike where he said he deliberately made GOZU with a slow pace because he wanted to make a movie where nothing happens. His films have a rep for being filled with outlandish violence , gore , rape , and disgusting behavior.

And when I first saw it I was waiting for a shootout , stabbing , a beating , something to happen but there is no graphic gore at all. Watching it the first time was frustrating because I expected something crazy to happen. I kept thinking okay here it comes , here it comes , something crazy is gonna happen. More than halfway through it though some crazy things do happen and they certainly are weird but not on the blood splattery gory side. Watching it a second time though I noticed the look of GOZU. It was made in 2003 but could pass for a early 90’s film or possibly a late 80’s movie and also looks like a Hong Kong action movie and perhaps a all guns blazing shootout could erupt at any moment. Never happens though.

It’s not a horror movie but the elements are there and there is a scene where a pay phone starts ringing and Minami stares at the phone. The phone has a strange ringtone and the camera slowly moves toward the phone intercut with shots of Minami staring at the phone. Somehow this gives off a weird haunting vibe and again demonstrates how good a film maker Takashi Miike is.

Then there are the strange characters that Minami meets as he searches for Ozaki. There’s a guy whos face is half white and a brother and sister who run a inn. The sister has large breasts and is always lactating milk. Even Minamis and Ozakis boss is weird and has to shove a ladle , handle first up his ass to get a erection.

Then there is the dream sequence that is like the crown jewel for the weird stuff in GOZU. GOZU means cowhead in Japanese so that can clue you in a bit. Really I don’t want to reveal anything about this movie if you have not seen it. It is so much better to discover it on your you don’t need me to ruin it for you. So if you are a Takashi Miike fan or a fan of surreal and strange films this is definately one to check out