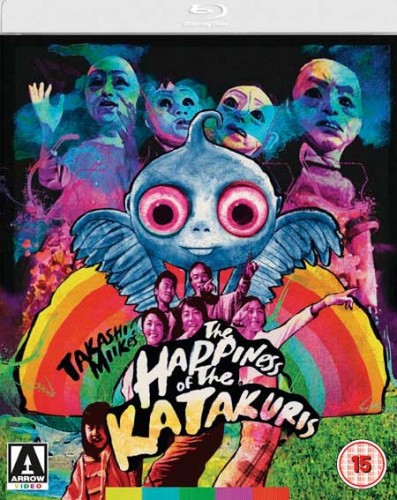 The Katakuri family has just opened their guest house in the mountains. Unfortunately their first guest commits suicide and in order to avoid trouble they decide to bury him in the backyard. Things get way more complicated when their second guest, a famous sumo wrestler, dies while having sex with his underage girlfriend and the grave behind the house starts to fill up more and more.

Dazzling! Are the first 5 minutes as a barrage of cool claymation hits you that would make Frank Zappa and Jan Svankmajer proud! You know from that intro this is not your typical Asian freak show ride. Directed by master filmmaker Takashi Miike “Happiness of the Katakuris”is a pretty cool and pretty weird film experiment. We’ve seen his films run the gamut of crazy, intense violence, and unsettling horror themes, so somehow he pulled this one out of his needs as a film maker to produce a quirky family gone wrong sort of eye feast of a film. 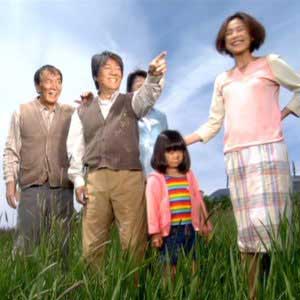 The film is loosely based on Korean film, “The Quiet Family”. The story centers around the family of the Katakuris who are tying to make their family business of a bed and breakfast Inn place work. They have all relocated to this quiet countryside Inn using the fathers redundancy pay to pull there strengths together and operate it in hopes of cashing in on the location and scenery. So far every guest that has stayed there ends up dead in the morning which can’t be good for business.

The daughter is a single mom looking for love, the son a trying to get his life back together and the rest do what they can to make ends meet. As they struggle along occasionally they get tenants, that they’ve come to expect the worst from. A sumo wrestler and his girlfriend, a suicidal occupant, a con man and a family that has come there to end there suffering. All in all the Katakuris end up having to bury and re-bury the dead bodies so that they don’t tarnish the reputation of the Innby reports of death. With hopes of a major road opening up, they try and stay positive even with the odds against them. 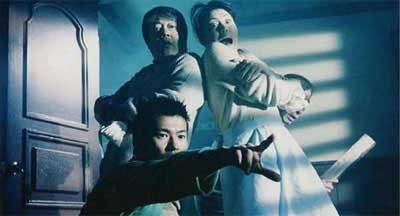 The humor in this film is subtle but intended. As things move forward you can see the family begin to self destruct while trying there best to maintain a positive attitude. Add to all this a volcano problem they find themselves dealing with at the films end done entirely in claymation.

Sounds pretty normal eh? Well that’s where things are strange. Every so often the film breaks into a cheesy musical. for what reason, I’m not sure except to make for a really bizarre segment. The musical sections are campy, loony and sung badly. In fact I was often reminded of a few Saturday night live music sketches in these. I suppose it brings that odd charm that the Director was seeking. Although I cant help wonder where these ideas spring from. In one segment the mom and dad are transported into a disco, stage setting where they belt out songs and dance. Other times they break into choreography like they were born into it. Like most musicals, you usually see the song and dance routines coming. But because they are not used extensively they are interjected at the Director’s wish than to carry scene to scene. 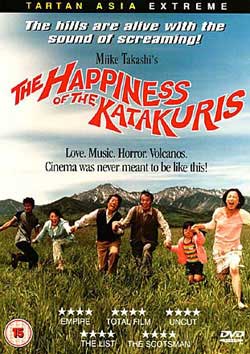 Divorced daughter daughter Shizue ends up falling in love with a con man who disguises himself as a militant who claims to be related to British royalty and the Queen of England. True intentions are revealed by the much wiser grandfather, but only after they break into more song.

The story falls more into a black comedy classification that anything with its off beat humor. The highlight of this film as mentioned before are the breakaway claymation segments. There is not alot, but when they appear, they are actually pretty cool. The film tends to drag though out the middle as they family works though there issues and money problems. It’s really a mix of alot of things, part demented “Sound of music”, part drama, part horror and part Saturday morning kids show.

I cant say its my favorite Takashi Miike film, but it has its place and charm. I wouldn’t recommend this to horror fans, because the horror element is pretty light. Takashi Miike fans will dig his crazy style as they’ve come to know him by but in the end its just a whacked out viewing that may bring a few laughs.