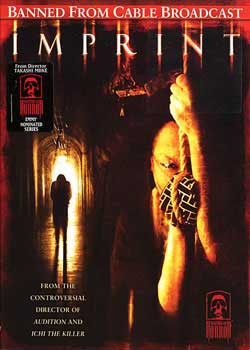 An American journalist returns to Japan to find his long lost love. His journey leads him to a deformed prostitute who holds the key to discovering his beloved’s fate

Examination: A Hole that leads to Hell. Yes, and I mean that one.

Being a Takashi Miike fan, I absolutely had to watch this movie, even though it is a DVD release from the Masters of Horror collection on Showtime, is in English, and only 63 minutes. Imprint was never released on Showtime due to its graphic abortion and torture scenes. The mere sound of the word torture gets me worked up like a little kid in a candy store! It gives me a gambit of ideas to add to my torture toolbox and another reason why I couldn’t resist watching! It’s also based on the novel by Shimako Iwai who is known for period stories and the screenplay is by Daisuke Tengan (AUDITION).

The story follows a 19th century American journalist by the name Christopher (Billy Drago) who is searching all of Japan for a prostitute named Komomo (Michie Ito) that has been sold to a brothel, who he has promised to return for and take back to America.

The only American, in a boat full of Asian men, drifts through the water, passing a variety of floating female corpses, including a pregnant one. Finally arriving at an island that only inhabits demons and whores, Christopher meets a deformed prostitute (Youki Kudoh) that remains nameless throughout the movie, so I will refer to her as Scarface throughout this review. 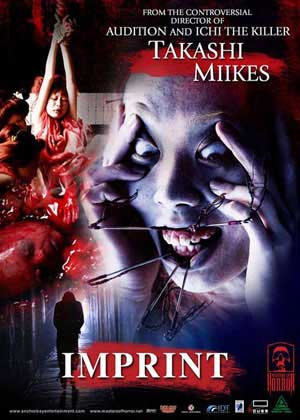 Christopher discovers that Scarface knew Komomo and that she’s committed suicide by hanging because she couldn’t wait any longer for the man she loved. In a fit of rage, sorrow, disbelief and some of the worst acting I’ve ever seen, Christopher demands to know the true story of what happened to Komomo. Scarface is puzzled why Christopher was so in love with Komomo, and it is revealed that she reminded him of his dead little sister. Weird. But who cares at this point because you’ll be overwhelmed by the lame acting.

Grief stricken and a little too much sake, Christopher asks Scarface to tell him a bedtime story. Scarface begins telling him about her childhood. Her mother was a midwife, her father was ill, and she was loved. So much so, that when her father died, her mother gave her away, where she was bought and sold over and over again.

It was in a brothel that she met Komomo. Disfigured, everyone abused her except for Komomo. Komomo was sweet, beautiful, and desired by all men, which made all the others jealous, which led to whorehouse infighting and a sadistic torture scene. When the head mistress’ ring comes up missing, it is Komomo that is punished ( but not her face, because it is too valuable). She is hog-tied, burned, has long needles stuck under fingernails, and in her gums – leaving them exposed, then she is strung upside down hanging by one leg, while all the other whores watch in amusement. Later Scarface finds Komomo, an apparent suicide, hanging from the rafters by her neck. 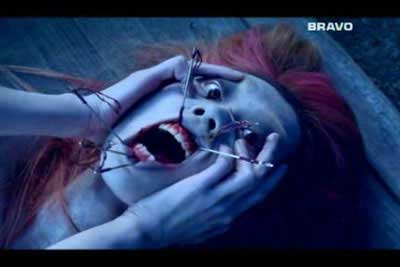 Refusing to believe that Komomo would do such a thing, Christopher demands the truth. Scarface gleefully tells the Yank that whores never tell the truth and sometimes it is better not to know. But he continues to beg like an out of control jackass, so she tells him.

Turns out that Scarface setup Komomo with the stolen ring, and is the one that actually killed her. All because Scarface loved cruelty, can’t stand kindness, and Komomo had a good heart, but a tortured body.. She rants that she helped Komomo get to heaven by strangling her to death.. Christopher is suspicious, although I don’t know why, and feels that Scarface is leaving something out, so he demands to know what she is hiding, then out of nowhere a voice…….. “Tell him the truth.” And I will reveal the source of this voice a bit later!

Another story is now revealed. Scarface explains that she is a product of incest, her parents were brother and sister, she was molested by the village monk, and her mother was no midwife. Instead, she was a turn of the century abortionist, ripping fetuses from screaming mothers with her bare hands, tossing them into a basket, and dumping them into the river like fish food ( A pinwheel is then placed on the riverbank for each fetus savagely torn from its mother’s womb). And after seeing Scarface, her own mother tossed her into the river too, but she didn’t die, so good hearted mom decided to take her back and teach her the art of baby ripping. 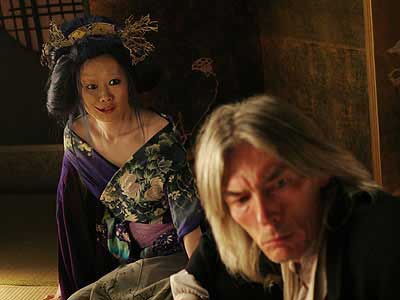 Now the truth is finally revealed! Or maybe not?! Scarface tells Christopher that she stole the ring to give to her conjoined twin. There’s a twin? Yes! Scarface has a stronger willed conjoined twin that is attached to her head, hiding beneath her hair. I hate to even write this because it is so ridiculous, but for God’s sake I was expecting better. It’s a hand with a mouth and eyes and it speaks! And it ate the ring that got Komomo sadistically punished. I love Takashi Miike so that’s all I have to say about the subject of the twin-hand-mouth. All I can think of is that this movie was in English and maybe, just maybe, something was lost in translation!

Christopher shoots Scarface and we also discover that he murdered his own little sister. Yeah, the one that reminded him of his beloved Komomo. But it turns out, that Scarface might actually have been Komomo, and he is thrown in jail. While sitting in his dirty cell and eating slop, he see’s the ghosts of Komomo, his dead sister, and a broth of dead fetuses in his water bucket. Tasty Goody!

Takashi Miike excels at telling stories and Imprint certainly is twisted. Fans of Miike will most likely want to see this movie. The cinematography is great and is strongly atmospheric. But, Billy Drago’s performance is horrible and the conjoined twin –hand- eyes- mouth kills the scare factor. The torture scenes deliver the goods, but can’t solely pull the “dead” weight of the remainder of the movie. Scarface does a decent job at weaving stories which leaves you wanting to know exactly what really happened to Komomo, and that’s just about it.

Oh, and if you do watch the movie, you’ll know EXACTLY what I mean about the Hell Hole.