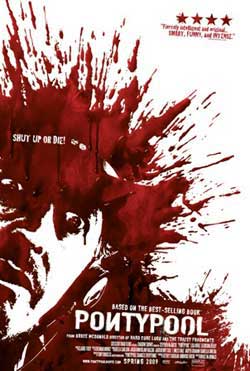 The flick is set in a radio station in Pontypool where one day the morning team starts taking reports of extreme, bloody incidents of violence occurring in town. As the story unfolds, the radio staff soon realizes the violence that is ripping society apart is due to a virus being spread through the English language. That in turn poses a problem for a yappy radio jock and his staff holed up in the broadcast booth housed in the basement of the town’s abandoned church as a slaughter rages beyond its walls.

Pontypool was adapted from the novel Pontypool Changes Everything by Tony Burgess, who also wrote the screenplay. The story is about “Shock jock” Grant Mazzy who has, once again, been kicked-off the Big City airwaves and now works at the only job he could get hosting the early morning show at CLSY Radio in Pontypool Ontario, which broadcasts from the basement of the small town’s only church. What begins as another boring day of school bus cancellations due to yet another massive snow storm, things quickly turn deadly when reports of people having bizarre seizures, developing strange speech patterns and evoking horrendous acts of violence start piling in. Before long, Grant and the small staff at CLSY find themselves trapped in the radio station as they discover that this insane behaviour taking over the town is actually a deadly virus being spread through the English language itself. Do they stay on the air in the hopes of being rescued or, are they in fact providing the virus with its ultimate leap over the airwaves and into the world?

Every so often a film comes along that doesn’t fit the usual mold. At first that reaction is open-armed and then you begin to wonder if you should have open your arms that quickly. Such was the reaction I had with a film by an even stranger name. “PontyPool” is a word that brings to mind nothing. Upon seeing the film, I believe the film was also named for that intention. I think fans of the genre will walk away from this one with the same analogy. Is the horror effective enough? Is the meaning lasting or just nonsense?

To begin, Pontypool is a small town in Canada where the event takes place. When I say event, even that is the stuff of enigmas. Our dynamic actor Stephen McHattie plays an even more dynamic role as the local radio personality Grant Mazzy of radio 660 “The Beacon”. Grant is made of the stuff that we’ve come to know from wordy, meaningful and opinionated radio personalities that litter that airwaves today. In introduction, my mind quickly shuffled into memories of the film “Talk Radio”, though that thought changed just as quickly as it came. Instead as the film progressed I was reminded of the famed Orson Welles gag where the radio faked an end of the world scenario to listeners.

The story is well known but the effect was similar as if directed in reverse. Upon coming in to do his show one stormy snowy night, Grant begins his spiel as usual. His over conservative producer Sydney Briar (Lisa Houle) is in his ear constantly making recommendations to tone it down and dull up his presentation. It appears that as good of a radio personality as he is, the town is simply simple and dull. Though they like it that way. In addition to their studio hand Laural Ann (Georgina Reilly), the 3 dig into the nights news and itinerary.

We get to know Grant pretty quick. His speaking act approaches listeners with a “take no prisoners” attitude as he works on building a relationship with his audience. The films begins with a monologue about the missing local cat. Honey is his name and apparently is the subject of his rather sarcastic night gab. We get the feeling that not much happens in this little town of Pontypool.

Well much in the vein of cinema verite style films, we are thrust into a situation that works the same but in an audio sense instead. Reports come into the studio that tells of a riot outbreak around the medical center headed up by Dr. John Mendes. Like bugs, folks are freaking out in weird ways, repeating words and transfixed into a trancelike state. Reports continue to come in from outside reporters who reveal bits and pieces of this outbreak. Much like films we expect this to be, this is no zombie film or “rage” attack. It is something else entirely. The cause, the cure, the outcome is all a matter of perspective as the film rolls on. However, where the terror delivers nicely is in the isolation of the radio station that is enhanced by the reactions, attitudes and expressions. Quickly like a nuclear war, the walls come tumbling down in their reality of the outside world. Panic, and a responsibility to report the news combines giving us a genuine portrayal of close circuit horror.

As Grant foreshadows the film early on in his reports of the weather “something big is going to happen!” PontyPool is a great effort that easily keeps you glued to the performance given by Stephen McHattie. Director Bruce McDonald has managed to create a piece using limited set costs and environments, a brilliant script written by Tony Burgess and a cast kept to a handful of actors. In other words a studio budget’s dream situation. What is more surprising is that it all works. My complaints come in the 3rd act which confuses the outcome with a overly insensible explanation of reasoning and reality.

If there is a deeper meaning meant to injest then I guess it simply flew overhead. By no means is this a “don’t watch this” review, however with all you gain from it, you may walk away in the end frustrated. I think if I leave it at that, …then that is enough to leave.