Home | Articles | Lists | The 7 Scariest Horror Movies of My Childhood

Movies have been a part of my existence pretty much since day one and that also included horror movies.  I’m not sure what the hell my parents were thinking- maybe it was because they were kids raising kids- but my earliest motion picture memories had Mrs. Voorhees stalking camp counselors, Jack Torrance chasing his wife and son through a hotel with an ax, and Max fending off the mohawked followers of Lord Humongous alongside Luke learning the ways of The Force, Dumbo discovering he can fly, and Dorothy trying to get back home to Auntie Em.

I’m still not sure what their logic was, but I am thankful I did get to experience quite a few shockers back in the days when the technological smac kdown was between VHS and Beta. 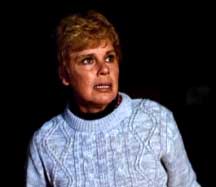 Despite the multitude of vampires, werewolves, ghosts, monsters, and sexually-repressed psychos, the following seven were the films that truly shattered nerves, and guaranteed quite a few nights of covers pulled over my eyes.

Not so much the whole movie, but definitely the last act.  The reason the final third of Friday the 13th was so scary for me back then was the fact that Mrs. Voorhess (played to the hilt by Betsy Palmer) looked a lot like my grandmother.

Seeing Jason’s mother running around chasing Adrienne King while talking to herself ended up being what I would imagine if Grandma had completely lost it.  Ultimately, it was that finale in which Jason pops out of the water that truly scared me sh*tless, and it still remains one of the greatest shock moments ever!

The Shining was my first Stephen King movie, and it was also my introduction to Jack Nicholson.  I must have been four or five when I first saw this movie as it debuted on the telly, but despite the usual scene trimmings, this movie was one of the biggest nightmare factories of my childhood.

All of it: the cascade of blood coming out of the elevator, the creepy twin girls, the music, Danny’s muttering of “Redrum”, Jack on the rampage, and whatever the hell was going on in that room Wendy looked into while searching for her son.  As I got older and started catching The Shining on cable, the film became even scarier, thanks in large part to the infamous Room 237 scene.

Sure, King wasn’t a big fan of Kubrick’s final product, and it became a topic in the never-ending “what-was-better-the-book-or-the-movie?” debate, but I experienced The Shining before knowing any of that!  For me, this was one of the most frightening movie moments of my youth, and to this day The Shining still packs a punch.

Simply put, Poltergeist was so absolutely frightening as a kid, because it brought all the little things children are afraid of to vivid, and sometimes excruciating, life.  I recently watched the film on Turner Classic Movies, and I was surprised that it remains so scary even after more than a quarter century of slashers, psychological thrillers, and Saw knock-offs… and it’s rated PG!  The Poltergeist film series on the whole also has a very disturbing behind-the-scenes legacy, which adds another nerve-wrecking dimension to what is already a horror masterpiece

IT (The first half)

One of Tim Curry’s most memorable roles is that of the evil clown, Pennywise, who torments a group of small-town kids in IT.   I remember the hype that preceded this TV mini-series, based on another Stephen King novel, and the first two hours certainly delivered.  IT would forever make me feel very cautious about being near clowns (as if the doll from Poltergeist didn’t do that already)!  Then came the conclusion the next night, and it was a severe letdown.  Still, remembering Pennywise’s horrid and brutal abuse of the protagonists makes me nostalgic for the days when filmmakers had the balls to put kids in danger in horror films. 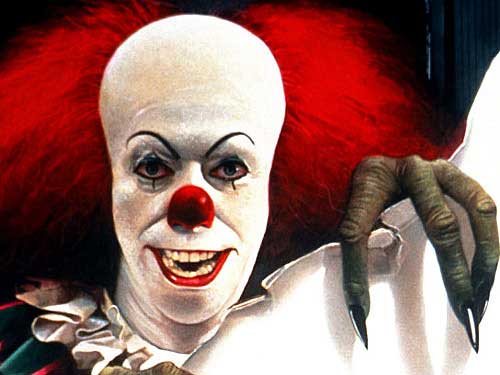 1981’s Blood Beach, the story of beach-goers pulled underneath the sand by an unknown force, is a unique case of a movie that was so terrifying to me as a five-year-old, when I revisited it in my adult life I was surprised to find that now I think it is a complete piece of sh*t!

Don’t get me wrong, it is enjoyably bit of dirty, low-budget, exploitation fair, but how I could have been possibly been so scared of this movie that the next time I went to the beach I didn’t want to walk out onto the sand still eludes me. 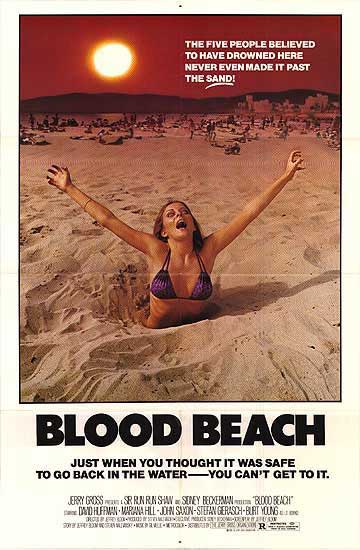 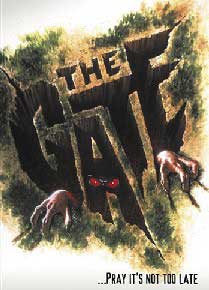 During the mid-to-late 1980’s it seemed all of Middle America was soiling their underpants about Satanism.

Thanks to the “Night Stalker”, Richard Ramirez, there were all sorts of pundits and d*ckhead parents on talk shows like Geraldo, Donahue, and Morton Downey, Jr. (remember him?) declaring heavy metal as “the devil’s music”, and sadly I bought into that (though at the same time, I was highly intrigued!).  It wasn’t long before one listen to my mom’s We Sold Our Souls for Rock and Roll album by Black Sabbath set me back on the right path, but I digress.

In addition to the idea of finding a hole to Hell in your own backyard, it was the paranoia about heavy metal being the gateway drug to joining a Satanic cult that added another frightening layer to 1987’s The Gate.

It’ll be interesting to see what Alex Winter does with that in his upcoming remake, although I doubt anyone will find anything remotely scary about bone-headed costumed acts like ICP or Hollywood Undead.

A NIGHTMARE ON ELM STREET

Last, but definitely not least, is Wes Craven’s A Nightmare on Elm Street.  I was in first grade when this came to home video, via the now-legendary Media Home Entertainment, and it shook me to the core like no other film did at that time.  First of all, kids have nightmares, and what better way to scare the little ones to the point of lunacy than a movie about a guy who kills you in your nightmares?  However, for those of us who were kids in the 80’s, A Nightmare on Elm Street was the scariest movie of all-time, because we were constantly bombarded with “Stranger Danger”,  and here was a character who preyed upon children, was put to death, and now preyed upon them in their dreams. 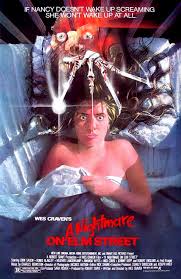 The film viciously suggested to us, the innocent, that evil would never be extinguished, and that it would always find a way to hurt us.  Not even six sub-par (and sometimes goofy) sequels, distillation into a merchandising machine, or a pointless remake can take away our first memories of Freddy Kruger, who, thanks the original (and still the best) nightmare on Elm Street, is our face of the boogeyman.