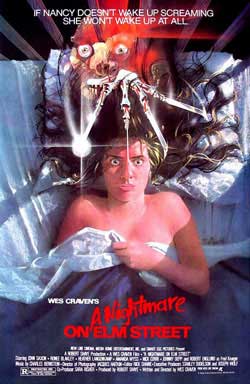 Years after being burned alive by a mob of angry parents, child murderer Freddy Krueger (Robert Englund) returns to haunt the dreams — and reality — of local teenagers in Wes Craven’s spine-chilling slasher classic. As the town’s teens begin dropping like flies, Nancy (Heather Langenkamp) and her boyfriend, Glen (Johnny Depp, in his big-screen debut), devise a plan to lure the monster out of the realm of nightmares and into the real world.

It’s always nice to sit down with a classic horror film and relive some past scares. Of course, not every horror film from our childhood can stand the test of time but the ones that do are well known to every horror fan. Because of that, I’m going to approach the entire Nightmare on Elm Street series a little differently than I would other films I’ve reviewed. 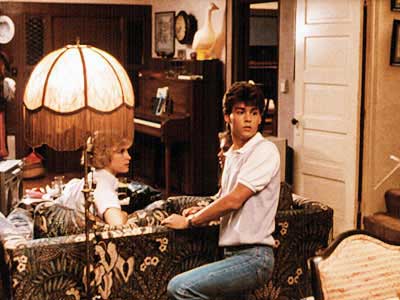 A Nightmare on Elm Street follows the story of a group of teenagers who are being stalked in their nightmares by a horribly burned monster, recognizable by his iconic glove with razorblade fingers, red and green sweater and dirty brown fedora, Freddy Krueger.

We first meet Tina (Amanda Wyss) as she’s being chased through a boiler room by Kruger with seemingly no way to escape. When she wakes up she finds her nightgown slashed in the same way Freddy had in her dream. That can’t be good. 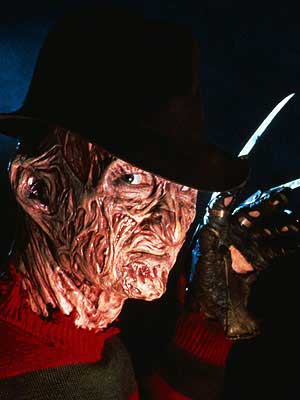 The next morning, Tina goes to school and meets up with her friend Nancy (Heather Langenkamp), Nancy’s boyfriend Glen (Johnny Depp) and Tina’s boyfriend Rod (Jsu Garcia). Tina tells her friends about her nightmare but before she can go into any detail they run off to class.

Later that night, Nancy and Glen stay with Tina while her parents are out of town. Rod shows up and we’re on our way to a sex scene. After Tina falls asleep, Freddy shows up again, this time however we see the real world effects, as Tina is dragged from the bed and up the wall by an unseen force while Rod screams in fear.

Back at the police station, Lt. Thompson (John Saxon), Nancy’s father arrives and demands to know why his daughter was at the scene of a murder. The Lt. is convinced that Rod is the killer and is hell bent on finding him. 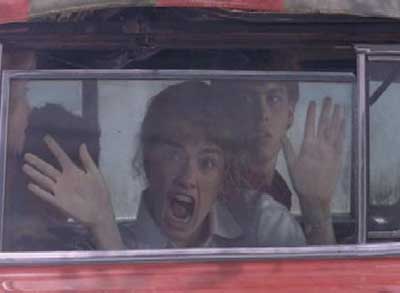 From here the movie continues on with Rod being captured and Nancy beginning to have the nightmares, leading to Rod’s death in the holding cell and later the famous “Bed Geyser of Blood” scene. Throughout this we learn more about Freddy, a local child murderer who got off scot free due to a clerical error. The Elm Street parents weren’t too happy about this so they tracked him down and torched him.

The first thing to remember when revisiting A Nightmare on Elm Street is that this isn’t the Freddy Kruger we all know and love from the sequels. This is a much darker, more vicious Freddy that sadly wasn’t resurrected until Wes Craven’s New Nightmare a decade later. For the most part, the acting is passable Heather Langenkamp can get a little annoying at times but manages to keep Nancy a likeable heroin. John Saxon sadly doesn’t get enough screen time in this film but still brings enough to his role to make you believe in him and relate to his frustration as a divorced father of a teenage daughter who claims she’s being stalked by a man he killed. 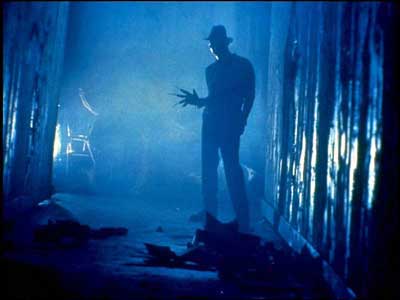 Yes, Johnny Depp is in this film and while it’s funny to see him as a young actor it’s not his best role. He does a passable job as Glen and his death scene is one of the best in the series.

Now, I can’t forget to mention Robert Englund’s performance as Freddy. Englund uses the make up to full effect in his acting but doesn’t let it control the performance. The pure evil that seems to flow through him in his every scene is frightening and makes a relatively boring character creepy.

Now before the nerd rage starts to fly at me for calling Freddy boring, allow me to elaborate. Freddy Kruger in and of himself isn’t really a scary character. Yes, he’s horribly burned and he’s got a sweet razor glove but his back story, while believable, isn’t fantastic. He was a child killer and now he’s back from the grave to kill the children of Elm Street again. If the whole dream element of this film were non-existent this film would have crashed and burned. 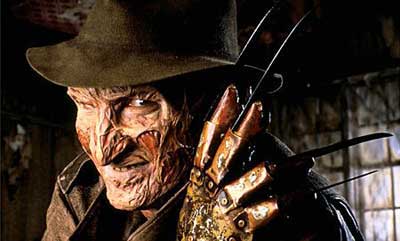 Wes Craven deserves a lot of respect for taking a genuinely scary idea (dying in a dream) and turning it into a horror film where what could kill you in your dream was at one time, a real person. It’s the idea that you aren’t safe in your most vulnerable moment that makes A Nightmare on Elm Street so effective.

I’ve always loved the Nightmare series, not because I was a big slasher fan, but because Nightmare just seemed so much more cultured than say the Friday the 13th series. Sure, Jason is a scary mother f*cker but as we’ve seen he can be defeated (at least temporarily) and he really isn’t too bright. Freddy Kruger is the screen face to every creature we’ve ever seen in our nightmares as children, the monster in our closets or under our beds, and despite not being a very deep character it’s what we as the audience bring to the films and to the character that makes Freddy so effective. A Nightmare on Elm Street brings you back to your childhood, of being afraid to close your eyes because the thing that lives in your closet will come to get you when you do or worse, the one place you feel like you can escape from your daily life suddenly becomes a death trap.

If you’ve never seen the original A Nightmare on Elm Street you’re missing out one of Wes Craven’s best films. If you’ve seen the sequels but never watched the original, you’ll be in for a big surprise when you find out that Freddy wasn’t always a wise cracking goofball and was actually f*cking scary once.

I really dig A Nightmare on Elm Street, I think it’s a fantastic horror film, despite a main villain that relies more on the circumstances of the film than his back story to be scary and despite the uneven quality of the sequels, it’s always nice to be reminded as to why we were all scared of Freddy at one point or another in our lives.