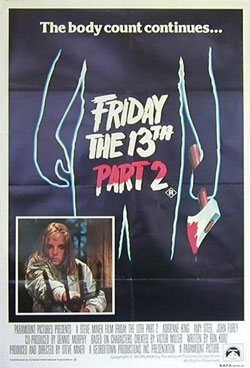 So it turns out young Jason Voorhees didn’t drown after all, he somehow found a way to shore where he crawled into the woods to spend the next 30 years living off the land and occasionally killing people all while wearing a burlap sack over his head. As luck would have it he also accidentally witnesses his long lost mother get beheaded at the very summer camp he used to attend. Now five years later people are actually stupid enough to open a summer camp right next door to camp Crystal Lake where Jason has been hanging around getting crazier and more retarded by the minute just waiting for people to kill. Is Jason successful or does Crystal Lake have its first murder free summer camp?

As far as the series goes, Friday the 13th part 2 ranks pretty low. The same team from the first film returns with Steve Miner now directing and they spend most of the film playing around with the time tested slasher formula with terrible results. Yes this is still better than lots of slasher films out there but as a Friday the 13th it’s just not up to par.

The set up is almost the same, disposable camp counselors, summer camp, shenanigans, Jason Voorhees, murder. My problem with part 2 is everything is so sugar free. Gone is the gore, gone are the creative kills, gone is the fun and the one set of boobs that matters in this movie you don’t get to see. 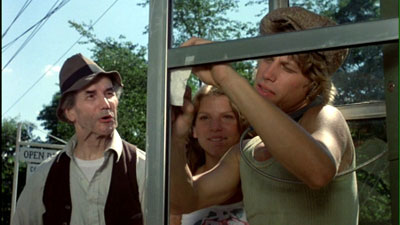 The writing is bad even for a Friday the 13th movie as it tries in vain to have a semi logical explanation of how Jason is alive and presumably in his 40’s. I still haven’t fully wrapped my brain around this films time line, there’s a 5 year jump somewhere and it’s Jason story takes the teeth out of the first films villain, Pamela Voorhees. Really I can’t imagine Friday the 13th without Jason but really you could have done a better job getting him on screen.

You can clearly feel the franchise trying to find its legs in part 2. Jason isn’t quite the Jason we know and love yet, the quirky sense of humor still hasn’t found what works, everything is just off and it hurts the film in ways I’m having trouble describing. While it’s nowhere near the depths of later films it still isn’t as good as it should have been. Here you have a slasher movie with training wheels on, good but not great. Recommended viewing for people who want insight into the new remake or Jason fans, otherwise avoid it.

Now that I have gotten that exhaustive review out of the way I can hopefully focus on other things that haven’t been covered in every other review of the Friday the 13th franchise. I won’t make any secret about it, I am not a fan of part 2, and it took me 3 cups of coffee just not to fall asleep through this beast. I don’t know how many times I screamed at the television wanting Jason to pick it up a bit but I know it’s a waste with this flick. 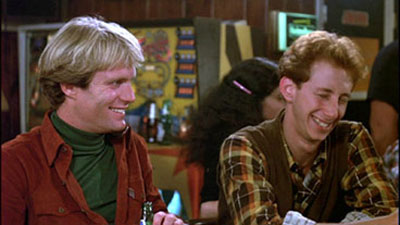 On the character of Jason:

If you believe what the film tells you via scary campfire story Jason never really drowned and he has been in the woods for 30 years. That just doesn’t add up to me. Really, a retarded kid fending for himself alone in the woods for 30 %$%*@ years, that’s just insane. For all intents and purposes Jason was very innocent and child like when he drowned and I just can’t see him surviving years alone in the forest like Grizzly Adams, if he was one those violent monster type retards, maybe, but apparently that didn’t hit him till puberty. My money is still on him being some sort of resurrected monster from the start, my evidence of this is the machete he takes through his collarbone without flinching or loss of any movement.

But let’s say it’s true, Jason has been in the woods for 30 years, somebody had to be taking care of him, giving him clothes, teaching him some survival skills. My money is on Crazy Ralph. I speculate that Ralph either found a young Jason in the woods soon after his drowning or is in fact his father Elias. I also speculate it’s not Jason who kills Alice in the opening of part 2, its Ralph. It just doesn’t seem likely Jason can figure out something like tracking someone down out side of Crystal Lake, Ralph could though. Yeah it’s a long shot but why in the hell is he always hanging around Crystal Lake? Just seems fishy to me. And before you point it out, yes Jason did kill Ralph but really when you think about it, that’s the kind of sh*t Jason would do.

I also dig Jason’s sac head look in this. No it isn’t nearly as cool as his hockey mask but its fun. The addition of Jason having his own run down shack in the woods with a shrine to his dead mothers severed head is also a nice touch.

On the strange relationship of Mark and Vicky:

These 2 characters really make no sense to me. Vicky from the start is obsessed with getting into Mark’s pants despite the fact Mark makes several attempts to tell her he’s %$%*@ crippled and that he’s training for something (Special Olympics?). Vicky doesn’t let up and manages to seduce Mark via a game of hand held hockey. Mark clearly tells Vicky he can find a way to get it on, one way or another, which to me implies he is going to fist her or something but that doesn’t stop Vicky, she goes and gets her sexy pair of brown panties. When I think of sexy time, I think of brown panties that’s for sure. But before Vicky can have Mark run over her snatch with his wheel chair or whatever the hell it is he does to pleasure women he gets offed by Jason. Some how with a machete stuck in his head Mark manages to wheel himself backwards to the stairs from the Exorcist before he dies, or at least that’s how I see it. 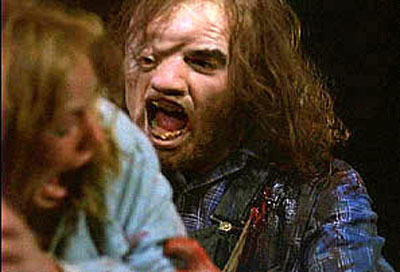 If they had the movie focus on these 2 idiots I would have been happy as hell.

A strange note about the character of Mark:

Mark was played by actor Tom McBride. Tom McBride died of AIDS in the late 90’s and to show support his fans presented several squares for the world aids quilt that was unveiled in 1999. Several squares on this giant quilt now have Jason standing next to a guy in a wheelchair. Funny in a weird sort of way, if AIDS wants to go have some premarital sex and smoke pot at camp Crystal Lake it better watch the %$%*@ out.

On the Character of Ted:

The character of Ted drives me %$%*@ nuts; he will always be the one that got away. Ted is the prototype Friday the 13th joker type character, the guy with the bad jokes that you just can’t wait to get killed by Jason. But in a moment that almost never happens Ted makes the faithful choice to not go back to the cabin, instead he chooses to drink, and that saved his life. Almost always if you have more than 2 or 3 lines in a slasher movie your dead, especially in a Friday the 13th film, Ted is a very rare exception to the rule.

I would love nothing more than to have Ted get killed in a future Friday the 13th just to show no one like Ted escapes Jason. Maybe have Ted doing some prop comedy at a stand up club and Jason walks in and sits down. Everyone laughs at the horrible jokes except Jason. As the set wears on Ted notices the weird guy in the hockey mask not laughing, and points him out to the crowd. Jason then gets up, grabs a mallet and crushes Ted’s head Gallagher style. The end, finis, cut, roll credits. 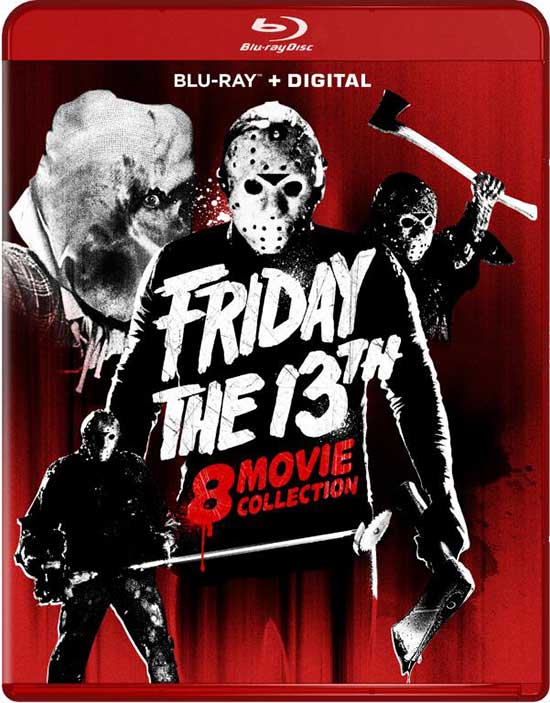