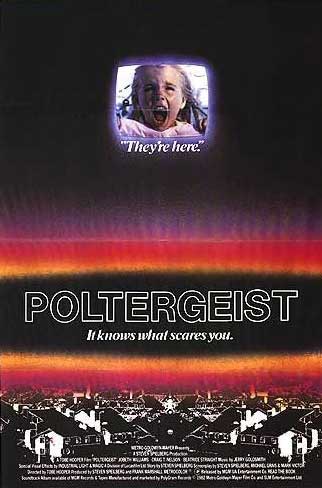 SYNOPSIS:
“While living an an average family house in a pleasant neighborhood, the youngest daughter of the Freeling family, Carol Anne, seems to be connecting with the supernatural through a dead channel on the television. It is not for long when the mysterious beings enter the house’s walls. At first seeming like harmless ghosts, they play tricks and amuse the family, but they take a nasty turn- they horrify the family to death with angry trees and murderous dolls, and finally abduct Carol Anne into her bedroom closet, which seems like the entrance to the other side.” (courtesy IMDB)

REVIEW:
In these days of multi-million dollar flops and rumours of the imminent decline and fall of Hollywood, Steven Spielberg is sometimes mentioned as a saviour of the film industry. While others turn out monumental turkeys, almost everything Spielberg touches breaks all previous box office records. He’s had his flops too, and yet he has been hailed as a latter-day Disney, another Thalberg, a Goldwyn who can talk straight. Actually, he’s more like the Ronald McDonald of the movies, a chap who’s able to take the same old basic ingredients and make them palatable to an enormous number of people.

All the Spielberg films are done well, extremely so, but there is a coolness and calculation about them. His horror and fantasy movies have a slick and glossy look, sort of like television commercials with goose pimples – which brings me to Poltergeist (1982). According to the credits, Spielberg co-produced Poltergeist, co-wrote the screenplay, cooked up the original story and delegated the directing to Tobe Hooper. Not quite an Orson Welles one-man band performance, but close enough. Most reviews and critics refer to it as a Spielberg film.

Basically Poltergeist is one more go-round of the dependable “Oops, we’ve moved into a haunted house” plot. This particular haunted house is not situated on a bleak stretch of the moors but smack in the middle of a tract of absolutely identical California suburban dream homes. It’s inhabited by a standard suburban family named Freeling. The youngest of their three children, a little blonde girl, becomes the focus of increasingly spooky happenings and finally the hapless tyke is sucked into a sort of limbo which seems to exist just off one of the upstairs rooms.

After parapsychologists and a freethinking midget ghostbuster are called in, the child returns and we learn that all these dreadful things occurred because Freeling’s unthinking bosses built this subdivision right smack atop an old cemetery. The spirits of the dead are ticked-off at having carports, swimming pools and barbecue pits occupying their sacred ground. The movie, however, also implies some of the ghosts are lost souls trying to get free of earth and onto the next plane of existence. Whatever their motives, by the end of the film the spooks have violated all the standard poltergeist rules of conduct anyway and whatever logic the yarn had, has been sacrificed to the bigger and better special effects.

One of the standard reference works on the supernatural, Lewis Spence‘s Encyclopedia Of Occultism, defines the poltergeist this way: “The name given to supposed supernatural causes of outbreaks of rapping, inexplicable noises and similar disturbances which from time to time have mystified men of science as well as the general public. The term Polter Geist (Rattling Ghost) is sufficiently indicative of the character of these beings, whose manifestations are, at best, puerile and purposeless tricks, and display an openly mischievous and destructive tendency. Disturbances are always observed to be particularly active in the neighbourhood of one person, generally a child or young woman.” Spence goes on to point out that, not surprisingly, these children and young women often turn out to be the ones who are causing the supposedly occult happenings. Spielberg’s noisy ghosts begin by playing pranks, but very soon turn nasty. In the last moments of the film, when graves open and decayed corpses start popping up while the Freeling’s house folds up and collapses into a heap of rubble, we’ve gone beyond poltergeists and into plain and simple special effects fireworks.

I guess you shouldn’t let this lack of coherence bother you, since we don’t look for logic or plot on a rollercoaster ride or a visit to a funhouse, and most computer games aren’t noted for their compelling narratives. What’s wanted is thrills, chills and spills, noise and flash. Most viewers of movies like Poltergeist have similar expectations. Most critics go along with them. For instance, New York magazine said “The story is nonsense” but found the film “Sensationally effective” and declared “The horror imagery is beautiful.” Although Vincent Canby of the New York Times professed to find a graspable plot, he did feel “The structure of the film is not perfect.” However, he thought “More important are the film’s technical effects.” I, too, while sitting there watching the picture was caught up in it and impressed with the effects.

I also found JoBeth Williams, who plays the mother of the little lost moppet, to be extremely watchable. Like almost all horror movie heroines, Miss Williams has most of her encounters with the supernatural while sparsely clad and her handsome body helps her a great deal during these moments of mystical stress. When the lights came on again I found myself feeling somewhat guilty, guilty the way I feel after having given in to junk food and then realising that yet again I’d mistaken the packaging for the contents.

One further thing that bothered me was the innocence of all the victims in Poltergeist. When it comes to horror, I much prefer that the victims of hauntings, demonic attacks and other unspeakable evils be in some way responsible for what befalls them. Call me old fashioned, but it’s more satisfying to me to see a fellow who signed a pact with the devil get his comeuppance, to watch while a scientist who was warned not to tamper with nature’s deep secrets get gobbled-up by the creature he created. Apparently, though, a good many people, including the millions who flock to see movies like this, feel they are the innocent victims of all that happens to them. Everything, good and bad, is due to circumstances beyond their control. They buy their cozy home in the country and it turns out to have a gateway to hell in the basement, they invite their sweet young sister to spend a weekend who turns out, through no fault of her own, to be a werewolf, they hire a babysitter so they can go out to the latest Spielberg movie and when they return find she’s been nailed to the nursery wall by an escaped madman. And none of it is their fault and they take no responsibility for what happens.

In real life things are often arbitrary. You’re walking along the street and (a) you trip over a bag containing $100,000 in unmarked bills, or (b) a brick drops on your head and kills you instantly. In neither case did you connive your fate. You signed no pact, conducted no forbidden experiments, participated in no loathsome rites. This sort of happening is fine for the six o’clock news, but drama (including melodrama) ought to work a little differently. I believe people in movies like this ought to be responsible in some way for what happens to them. As the final credits are unrolling over the broken bodies and the fallen houses, I want to be able to say “Well, they brought it on themselves,” otherwise the spooky manifestations seem as arbitrary as an plane crash or an attack of Legionnaires Disease. I’ll get off my soapbox now, and humbly ask you to please join me next week so I can poke you in the eye with another frightful excursion to the backside of Horror News, filmed in glorious 2-D black & white Regularscope! Toodles!