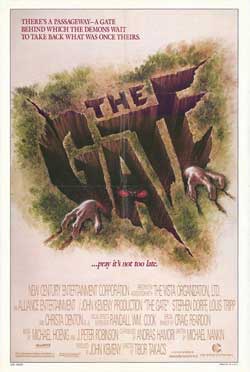 You all have heard the story about the kids left to watch a house while the parents are gone for the weekend right? How about the group of kids that decides to have a party, with some pretty spooky stuff like levitations going on. Little do these little rebels know they have actually opened a gateway to Hell in their back yard, and the old gods that are coming to crash their party really aren’t too happy.

“We accidently summoned demons who used to rule the universe to come and take over the world.”

Tibor Takacs’s 1987 film The Gate was a right of passage to my friends and me when we were children. Most of us in the neighborhood had started being left home alone while our parents were at work, latch key kids was the term used, so we quickly related to the young children (especially Glen and Terry) in the film. It was around that same age that games like the Ouija board and bloody Mary became games to see who in your group was a sissy, so it is really any wonder most of us in that age group still hold The Gate up on such a pedestal. 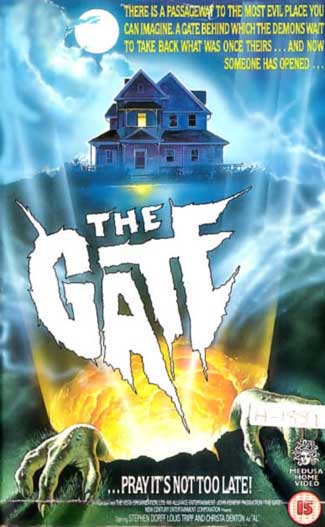 The story behind The Gate is a pretty simple one, there is Al and Glen who are brother and sister and Terry (the glasses wearing metal head who is left alone mainly because his dad is away on business). Al and Glens parents are about to leave for a few days and of course Al is left in charge of the house; Glen has gotten himself into trouble mainly due to his hobby of shooting off model rockets. With Glen being on lock down Al thinks she has a pretty easy job ahead of her. Al and Glens parents however are in the process of digging a large tree out of their yard, this leaves a rather unsightly hole in the center of the yard and of course Glen and his nerdy metal head friend Terry go to check it out. 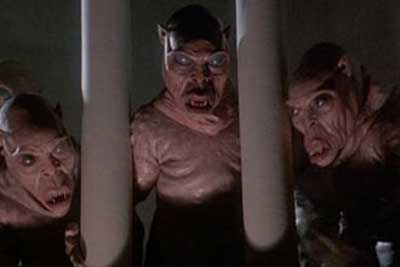 In the process of checking out the giant hole in the yard two things happen, the first thing that happens is that the young boys discover a rather large geode, during all of the excitement of finding the “rare” rock Glen manages to get a splinter and like any normal kid the boy just pulls out the splinter and drops it back down into the hole in the ground.

While the parents are away the kids will play, Al wastes no time calling over a group of her friends and she of course lets Terry come over to spend time with Glen, after all it will keep him out of the way. The boys spend most of this party playing with the geode attempting to open it so that they can see the crystals inside. Once the rock is opened it spills out a bunch of smoke and somehow leaves writing upon a child’s toy. Again being children, and obviously never watching horror films, they recite the writing that was on the children’s toy. This really doesn’t cause too many freaky and unusual things to happen, unless of course you count a levitation game that sends Glen floating towards the ceiling, and Terry has some kind of weird dream sequence involving his mother who later turns out to be Al and Glen’s dog Angus who of course dies. 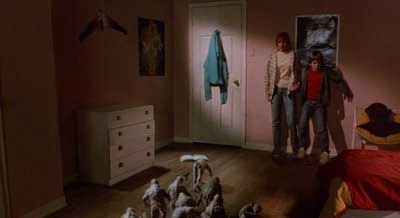 So some weird stuff happened at the party the night before, these kids aren’t phased by it. The next day Terry goes home and starts listening to his heavy metal records (a pretty funny scene especially when you think about how many people actually did what the kid is doing in the scene….I know that I am guilty). Al goes to the mall with her friends and her crush, a poor guy suckered into the job named Eric, is left to take care of Angus’s dead body. Of course he is supposed to meet everyone else at the mall so imagine his anger when he discovers that vet is closed. Eric being a hormone filled teenager has to think of a quick way to get rid of the dead dog’s body when he suddenly sees the large hole in Glen and Al’s yard. Eric quickly dumps the body of the dog and fills the hole right back up putting the cheap wood that Glen and Terry tried to cover the hole with earlier right back on. 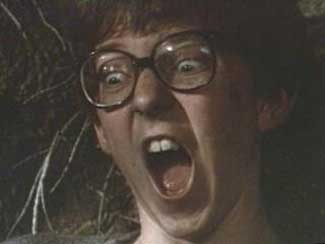 Terry of course is rocking out really heavy when he suddenly hears something familiar in the band that he is enjoying lyrics. He immediately goes for the bands album sleeve (yeah it’s a record) and luckily for the him the band has decided to make an entire demonology grimore an album sleeve. While reading through the grimore Terry discovers that the hole in the back of the yard is actually a gate way to Hell and a way for the old gods to make their way back into the world. Terry of course immediately runs over to tell Glen and the two of them immediately go to tell Al. As the three go into the back yard to look at the hole they discover that it has been covered back up, thanks to Eric, they assume everything will be alright and they just have a little more time before mom and dad come home so why not have some company over again the next night. Someone should have told them of course that some wonderfully crafted stop motion demons thought they were on the invite list. If they didn’t tell them about the demons they should have definitely told them about the zombie work man who crashes the party, that way they wouldn’t have even decided to have another party.

The Gate is a wonderful example of 1980’s horror. The concept is great, this was at the time when record companies were being scrutinized for having backwards messages in their songs, so the idea that a demonology grimore being contained in a record albums sleeve is hardly far fetched. The cast of the film is also quite good, considering they are mostly children or teenagers and that it was Stephen Dorff’s first film. 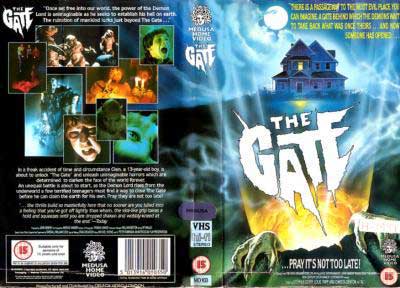 The main thing everyone remembers from The Gate though is the wonderful special FX, some of which still hold up to this day. From the small knee height demons to the wonderful demon lord, who was the kind of creation Harryhausen would have been proud of. Who could also forget the wonderful shot of an eyeball forming in Glen’s palm, that image haunted many a child’s mind in the late 1980’s. The work man is also a highlight, the zombie makeup is top of the notch and the scene where he briefly appears in the mirror while Al is looking only to vanish when she turns around still sends shivers down younger viewer’s spines. Yes this is the 1980’s so some of the FX are pretty shoddy but there are two scenes in particular which still look good on the screen. The two scenes are very similar, an object falls onto the floor only to break into a bunch of scurrying smaller things. The first instance of this is of course one of the smaller demons arms that gets trapped in a door, the arm falls to the floor only to turn into a mass of worm like creatures that squirm back under the door. The second instance is when the work man falls and turns into a group of the smaller demons. 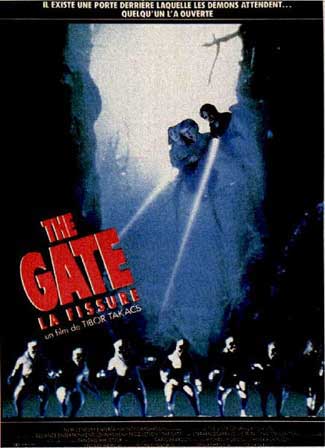 This was a rerelease that many of us have been waiting years for so it really is about time to see The Gate released back onto DVD, especially for younger genre fans who I am sure it will terrify like it did my friends and I back in the summers of 1987 and 1988. 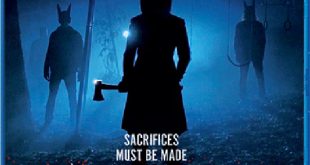