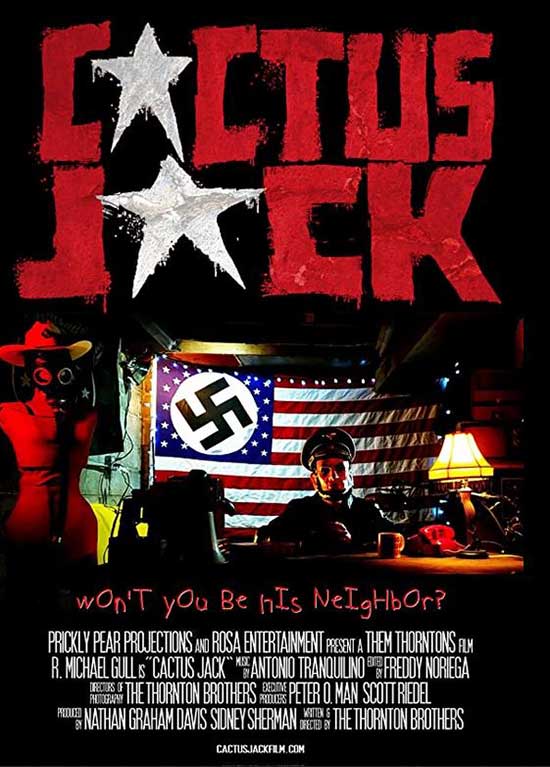 When an amateur documentarian sets out to make a film about a man who hasn’t left his mother’s basement in six months, he discovers the recluse is in fact a vile doomsday hatemonger. The tables are turned when the maniac snaps, imprisons him, and takes control of the cameras to start a vitriolic, venomous podcast-making enemies far and wide and promising violent retribution.

In the world of extreme film making, there exists a variety of approaches and subject matter. While one approach might be aimed at bloodshed and gore, another might focus on the elements of rape and torture. With that said, there is a 3rd type which takes things to heightened levels per use of vulgarities, raw opinions, and hate speech. Cactus Jack is one such type.

Created and written by the Thornton Brothers, the film Cactus Jack stars R. Michael Gull in the role of Ronald (or otherwise known as Cactus Jack), the host of his own extreme nazi-centric talk show. Though, we are getting ahead of things.

Ronald lives the life of a recluse, never leaving the basement of his parents home which has become a bunker of sorts filled with his deceased father’s technology (and a stockpile of can goods for survival). His skills, intellect, and prepping have enabled him to exist within the world while never really leaving his comfort zone to experience it. We get the sense that he wasn’t always this way, but at the result of a political movements, a changed society, and a world he doesn’t recognize anymore, it has given him a voice and a stance that he believes in. He is fact, a characterization of what some individuals these days have transformed into as a result of the current chaotic climate.

This begins “Cactus Jack“, a black and white feature that resembles “The Human Centipede 2 (Full Sequence)“, in raw colorless presentation. The film starts with Chris Sandberg (Sam Kozé), a young filmmaker, taking interest in Ronald’s reclusive lifestyle who has been in hiding for over 6 months. Chris’s plan is to film a documentary about Ronald, his radio movement, and his ability to stay bunkered down.

This initiates a rant that continues until the final act. Cactus Jack, as he likes to be known, operates a broadcasting radio show in his basement rooted in extreme hate mongering. The element of Nazism is established pretty early with the location set in year 2016 right before the election of Donald Trump who is currently up against Hillary Clinton.

The rants (which roll out of Jack non-stop with anger and frequency) are designed to create a voice and perception supporting the white supremacy movement. However, as Jack gets rolling we soon discover that he pretty hates “everything” taking things beyond just racism, but to whole vitriolic level that includes the hatred of women, religion and anything or anyone that resembles a leftist democratic stance (ok, he hates people period!)

The movie makes an attempt at resolving this nature in a small segment that reveals the verbal abuse Jack has endured from his mother, a constant in this man’s life. While not an excuse for compassion for his character, it certainly is the spark that ignited his rage in later years.

I was reminded of the movie “Talk Radio”, that while not based on the same objective or vulgarness, was also rooted in the story of one man’s voice going out into the world and creating impact.

Chris documents his interviews with Jack assuming that he would be telling a different story, but soon discovers the real reasons why Jack has gone the way of a basement hermit. While trying hard not to give away too much of the plot outcomes, we’ll just say that the tables turn on Chris as Jack transforms under his own violent rage filled monologues taking things to extreme levels.

An underground hate series emerges produced out of Jack’s basement that finds its way into the world giving him a voice. A voice that comes with serious consequences.

In summary, most viewers would either quit his film after about 15 minutes in or come away with the idea that its purpose was intended to promote an agenda. While it’s hard not to support that idea after an hour and 20 minutes of vocalized racial hatred, I am not that sure that the rather intense script was intended to be supportive of the ideas they present.

Rather, I believe the piece was created as a intense, powerful look at one type of individual’s perspective. So extreme, that it presents in a very visceral unforgiving way of spoken abuse that is becoming more common in the era of change. We can guess from the get go that things are not going to end so well, however only after our character has had plenty of opportunity to promote his spoken agenda to the world and make a stand for his cause.

After reading a few reviews on this film, it was clear that the “fiction” this experiment is grounded in still managed to produce real word reactions mirroring its narrative (did they not get the irony (joke) of the massive amount of clips presented in the movie that undoubtedly are making fun of the foreshadowed prediction of reactions to come?).

While I understand that critics will dismiss it off as a bad viewing experience that was created under hateful intention, it is still a movie at the end the day. It is no different than experiencing a franchise of films that delight in seeing a serial killer torture humans in unimaginable ways……fiction.

The movie begins with a clear disclaimer by the filmmakers stating that they don’t support or agree with any of the content or opinions presented. This in itself is an indication of this film’s purpose beyond surface value. It should not be “perceived” as limited to only white supremacy.

Cactus Jack is a well edited, well acted visceral film experience that most likely will not be enjoyed by most audiences today. Just as Oliver Stone made fun of the serial killer trend with his highly experimental “Natural Born Killers“, such is the clip-interlaced film “Cactus Jack” delivering an intent disguised in its own packaging. We have become a viewing audience of high sensitivity forgetting that fiction is still that… a piece of fiction. The Thornton Brothers take a bold step by poking the bear of the present climate with a powerful dangerous statement on what the world has become and what has arisen as a result.