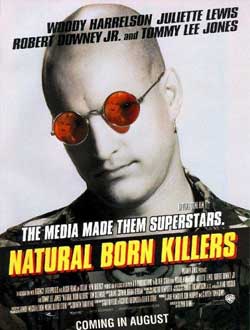 It was 1994, and I had been anticipation seeing Oliver Stone’s latest creation titled “Natural Born Killers“. I rushed to the theatre expecting a really unique film experience that looked like it was loaded with action and visual appeal. I was correct on those issues but was not ready for the “kind” of film that played out in front of me. I later learned that I was not alone and that it was bashed by critics world wide. So years later with this “same” film being one of my inspirations and favorites from one of my favorite directors…what has changed? 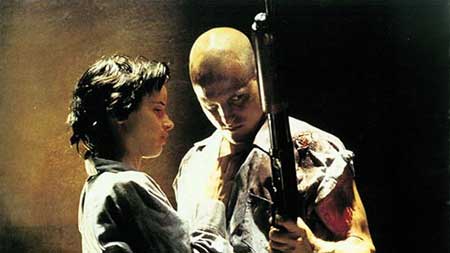 For one, “Natural Born Killers (1994)” is described as a crime, romance drama…though it is not your usual ride and far from a traditional style film. This element is especially important as what you experience the NBK is a play of social sensationalism and the influence of media. Stone was making fun of our culture while also celebrating it with a highly collaged visual piece. There is a story here but how its presented is very music video-like and surreal.

“Natural Born Killers benefits from a stellar cast. Each is presented in a very character-driven way that almost stereotypes each regardless of their lines. We see the obvious comparison to news reporter Geraldo and the comparisons to heavies such as Charles Manson. 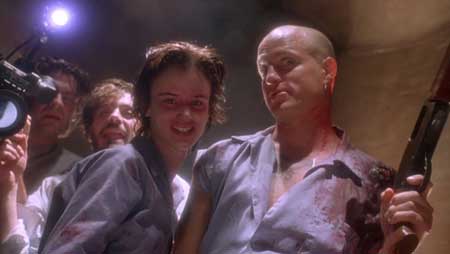 We see actor Rodney Dangerfield presented in a way that we never want to see again (we prefer Dangerfield as a older funny man rather than a aging incestual pervert). Tom Sizemore plays the role of Det. Jack Scagnetti who matches just about every derivative crime drama anti-hero to come out of the 20th century. Robert Downey Jr. plays reporter Wayne Gale who could as easily be casted as Geraldo for his determination to capture the scoop at every turn. 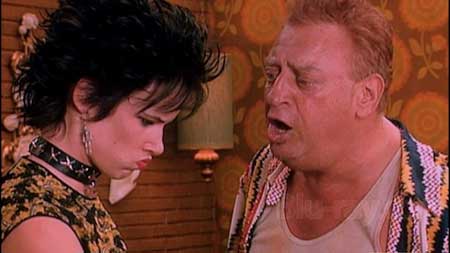 At the forefront it’s the performances of Woody Harrelson as Mickey Knox and Juliette Lewis as Mallory Knox that screams white-trash killers favored by the media with an exceptionally loud bellow. Mickey and Mallory decide that their love is all the matters taking the world down with them. They do it with style, with aggression and look good doing it. We follow this pair across the country as they embark on a wave of murders with nothing more than ambition on their side. Of course, this will gets stomped out, but not before the media has had a chance to raise them to celebrity status for being as bad as they want to be. 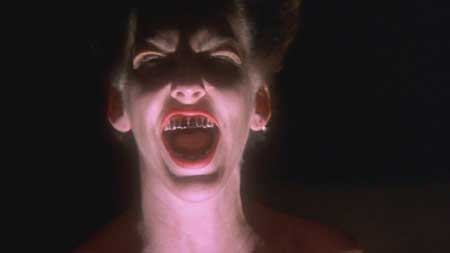 It’s probably a given that Stone will never make another film quite like this or actually WANT to for that matter. I believe that in his genius many didn’t really get his perspective the way he intended it to be perceived. Rather than focusing on the subjective views of a serial killer couple critics would just shake their heads at the way too much, too fast to consume in a proper manner roll out. Stepping back, it’s clear that what Stone did was take a story like “Bonnie and Clyde” and media the crap out of it as its being told. The visuals range from skits, to dramatics, to cartoons, to TV commercials. Each character is presented but is made fun of with the very mediums that fuel them. Mickey and Mallory are a media sensation and because of that Stone chose to deliver it in quite the same manner as a rush of TV media coverage might. 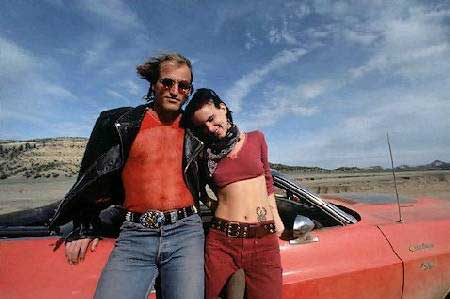 He also thought it pertinent to incorporate views using different medias that illustrated their violence, passion, and lack-of compassion for the human ideals. He made them exciting even though they were cold blooded killers. This relationship can be easily found within our own culture that makes celebrities out of chaos. Perhaps Stone’s vision was way ahead of its time. Perhaps viewers don’t like their medias interwoven and being reminded of “who” we are and what we do. Perhaps we just like our eggs fried sunny side up and not scrambled. Perhaps.

“Natural Born Killers” is comedic is sarcasm translated thru visual ques.The original screenplay was conceived by master writer Quentin Tarantino who could-of directed the film to a different tone altogether. The film is reported to have taken 11 months in editing alone with over 3,000 editing cuts made. One run thru of this film, will easily support that statement as things move a mile a minute. The movie incorporates psychedelic montages that use black and white, color scheming and associated animations. These are collaged over the main story which also plays out in fragments. Critics ranged in their interpretations also ranging from being inventive to horribly overbearing and personal. 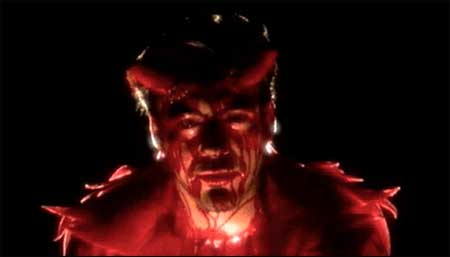 In any case, I firmly believe that “Natural Born Killers” is a work of cinematic art that should be saluted as much as any criterion achievement. It is trendy, ground breaking and a masterpiece for Oliver stone as a creator and stylist.