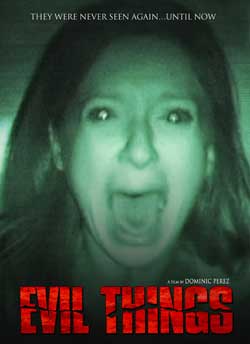 On January 9th 2009, 5 college students left New York City for a weekend in the country. 48 hours later, all 5 students simply vanished without a trace. There were no leads and no evidence…until now.

In the recent wake of Paranormal Actively style films, comes a new entry with the intriguing title of “Evil Things”. “Evil Things” is rooted on missing persons hype and a somewhat viral ad campaign. If it were to stop there, I’d be surely disappointed. Though to our benefit, it doesn’t. 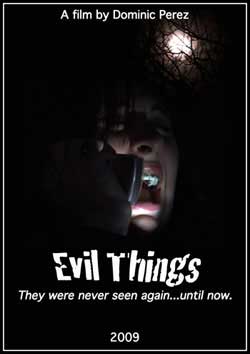 Check  out Trailer of “Evil Things”

To provide a simple setup, 5 friends head out on a road trip for a stay at a remote house in the wilderness. Not your typical shack or cabin setting but a very classy get away house owned by one of the group’s aunts (Aunt Gail). Gail is heading for Maine on a vacation and offered to let the bunch stay for a few days. The group consists of Cassy Crawford, Mark Schaefer, Miriam Dearing, and Tanya Kochen. 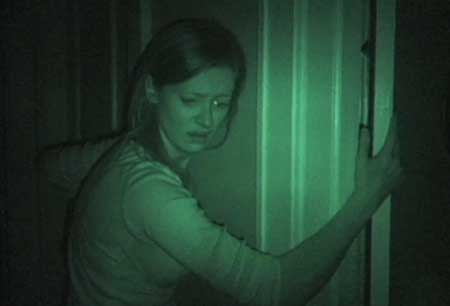 We get the impression that they are all best friends more in a “Friends” sort of way than romantically involved bunch. They, like any usual groups of there age are in it for the experience and a simple chance to party away from home.

Leo Pugliese is the aspiring filmmaker camera man of the trip who feels the need to document everything. Much to the groups annoyance, his insistence seems to be almost obsessive to the point where he really isn’t an engaged part of the group most of the time. 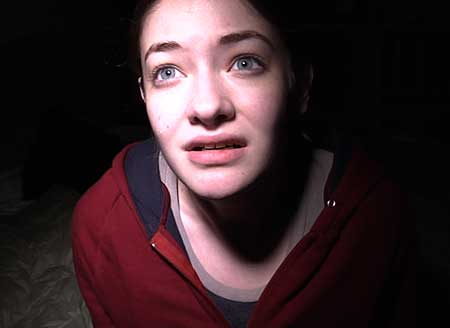 Viewers will kind of forget that fact after a while and just go with the flow of the film, however the approach is not unlike several films of this nature. The camera work makes sense and is able to hold the narrative pretty well. While this documentary style approach is all the rage today, it actually does work when it is setup correctly to make the journey believable. I was engaged with what was going on much in the way I felt when watching the film “REC”. Though premise aside, I felt that a story was evolving and that dread was just a frame away. 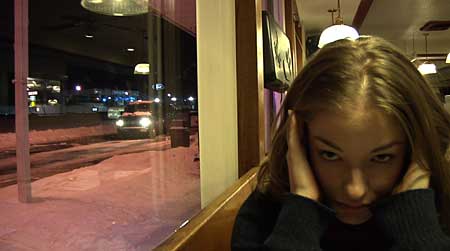 We experience a healthy doses of dramatic high and lows as they are faced with tense incidents and playful moments. Upon these tense moments, the character personas quickly change from playful to aggressive, angry and scared. This aspect is what keeps the viewer pretty much glued through the entire film. A clever introduction of intensity first comes per way of a obnoxious road van which provides a stalker like presence to the getaway as the van follows them, speeds up, slows down and shows up at a rest stops in an eerie manner. The windows are tinted black, so we never really actually make a formal connection to a person in these segments which makes the experience that much more threatening. What starts as a playful road annoyance begins to become a reason for worry and concern among the group. This segment kind of combined alot of old film references in my mind that either feature killer cars or killers within cars. Neither of which we establish as  viable profile for this unwelcome vehicle but which still appeals to our natural fear elements in the way its presented. 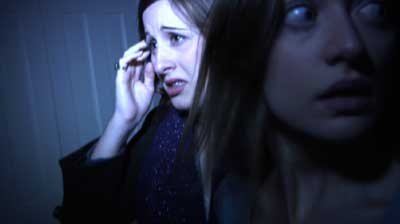 Director Dominic Perez has a great sense of adding a heavy sense of misdirection throughout the piece. While I really don’t want to spoil an y of the fun, I will say the dramatics ramp up pretty heavily with some actual harrowing moments. The intensity of the actors and the skewed view camera shots contribute nicely to this plan. what is more amazing is that like some of it predecessors, it’s those moments that occur that we don’t see that prove to be the most intense. 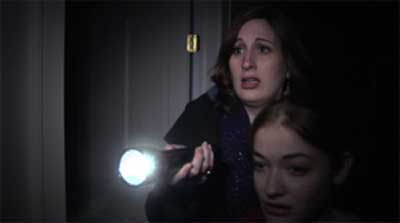 Evil things is a suspenseful bite your nails thriller that’s sure to please horror fans with its loosely frenetic mind play. I haven’t had this much fun watching an independent since Blair Witch. It’s smart, effective and proves that in the age of overkill sometimes less IS MORE. 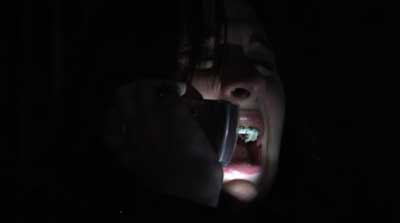