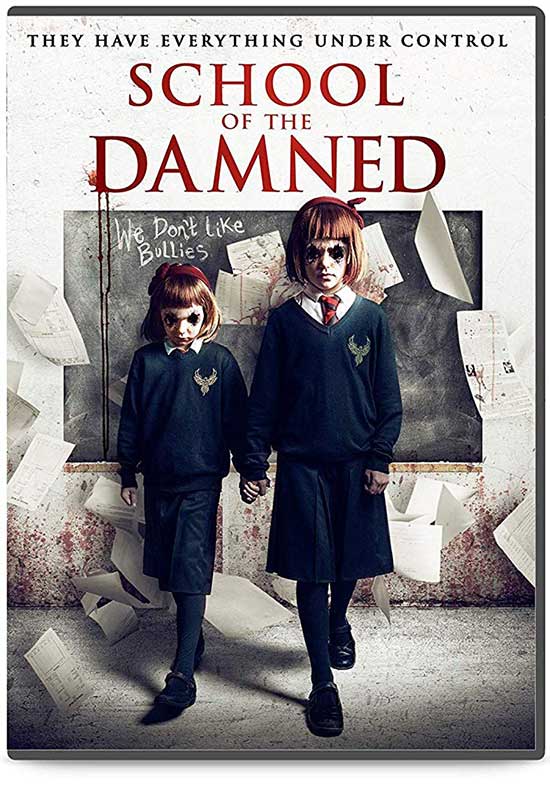 A teacher takes a job at a rural English secondary school, where he uncovers a diabolical plot to enforce good behavior via telekinetic violence.

School of the Damned (2019) is an attempt to move the psychic children antics of the various Village of the Damned films (themselves based on John Wyndham’s novel The Midwich Cuckoos) from rural towns into rural schools.  The plot concerns secondary school teacher Tony (James Groom, Soul Reaper 2019) taking a job at the woodsy “Herbert West Grammar School,” where he discovers a plot to tame unruly students using a group of malevolent psychic kids housed on the grounds. Don’t let the school name’s nod to H. P. Lovecraft fool you—there’s nothing Lovecraftian about this slow-moving and overly vague evil-children entry. Rather, the movie focuses on long silent stretches between dialogue and occasional murders that are both unmotivated and far-between.

No one actor in School of the Damned is so horrendous as to be criticized, but that could be partly due to the script’s complete lack of motivation. Groom’s role as instructor has him befuddled most of the time he’s onscreen, and the drive for this is never illuminated. Sure, there’s plenty of hinting at some difficult incident dogging him from his prior school, but it’s never thoroughly addressed, so the audience is left as confused as Groom looks. Rounding out the cast is Michael Greary (For We Are Many anthology 2019) as Abott, the school head, newcomer Max Mistry as the troubled new student Georgie, and little Amelie Willis (upcoming Don’t Let Them In 2020) as the wee psychic ringleader Sarah. Greary’s voice is just what you’d expect from an English administrator, and he’s the strongest of the bunch, followed by Mistry, who’d be right at home bullying a young Harry Potter. Willis, however, is told to do nothing but glare past bangs reminiscent of a kid out of 1980’s The Children (a better film with an even sillier plot).

The film is the directorial debut for Peter Vincent, and the technical aspect of things is well in hand. The problems stem instead from overlong shots, dull conversations that require too much silent mugging from the beleaguered cast, and a script that refuses to just come out and say whatever the hell it is that the audience is supposed to understand. Philip Dyas (A Fistful of Lead 2018) penned the script, and might’ve had the kernel of an interesting story inside the meandering scene work that ultimately wastes potential instead of expanding on it.

There is a twist of sorts in the final moments of the film, and a fight scene that actually feels realistic considering those characters involved. However, the idea that violent psychic powers would ever be used by a country-bumpkin secondary school with a behavioral problem is crazy, and the film doesn’t distract the audience enough to overcome that glaring problem. Part of this failure to engage comes from the script and unexplained plot elements, but a lack of fulfilling murder scenes does its part, too. There’s a death by mop-handle swallowing that features the film’s most interesting effects, but it’s nothing compared to the similar baseball-bat moment in 2003’s Identity. Other murderous moments involve deadly migraines (snooze) and a few occasions of weirdly out-of-place computer-generated x-rays of internal organs. None are satisfactory, and gore-hounds will find nothing interesting here.

Ultimately, School of the Damned tries to use the old deadly-children formula to new effect, but the subpar script and unoriginality kneecap the whole affair. Instead of a taught mystery-thriller, what’s left playing across the screen is a dull series of unclear arguments where characters say things that hint at meaning, but are in fact as shallow as a muddy English puddle.