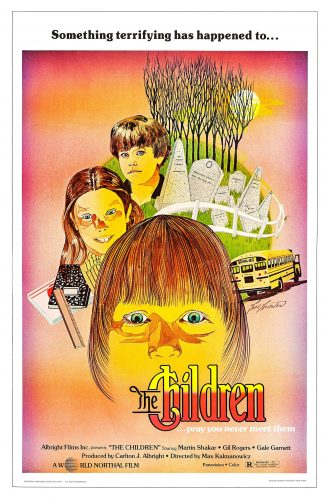 The adults in a quiet town in Massachusetts are plagued by a murderous outbreak committed by their very own children who sport black fingernails following a school bus ride through a thick cloud of radioactive leakage, causing the titular monsters to hug their parents and burn them to a crisp.

On March 28, 1979, a major nuclear accident on U.S. soil was thankfully averted just two weeks after the fictional The China Syndrome was released and nearly became science fact.  In the aftermath of the incident, which took 14 years and nearly $1 billion to clean up, a low-budget horror film was in production at the time that managed to fortuitously take advantage of the accident some seven years prior to the world’s worst nuclear accident which occurred in Pripyat in the Ukraine.  That catastrophe, known as the Chernobyl accident, itself has become fodder for horror filmmakers in its aftermath with the invention of radio-powered drones.

Originally called The Children of Ravensback (love this title!), The Children as it is now known was well into production in 1979 at the height of the second gas crisis when the Three-Mile Island event occurred.  Released on Independence Day in the summer of 1980 opposite box office heavyweights like The Empire Strikes Back, Airplane, The Blue Lagoon, The Shining, My Bodyguard, and Caddyshack, the film seemed to disappear until it was released on VHS by Vestron Video in 1984 and again on Rhino Home Video in 1991.

Troma released it on DVD in 2005 for its 25th anniversary, the box art proclaiming “Finally!  DVD debut of 1980’s theatrical smash hit!!”  Troma, this scribe is certain, was making this claim tongue-in-cheek, but just to be sure I researched the top 100 films for the entire year and The Children appears nowhere on that list.  The film did, however, garner a fairly wide release, playing at a theater three-and-a-half miles from where I live, and even at drive-ins!  It even played at the prestigious Rivoli in Manhattan – as did the butchered and critically panned version of Andrzej Zulawski’s Possession three years later. 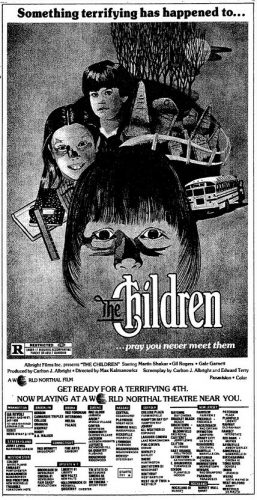 The Children is a predictable, by-the-numbers but somewhat entertaining yarn that effectively combines obvious elements of George A. Romero’s Night of the Living Dead (1968) and David Cronenberg’s The Brood (1979), two far superior films in terms of writing, acting, cinematography and directing.  A long-gone Public Service Electric and Gas electrical plant in NJ stands in for the Yankee Power Company’s nuclear generating facility at the film’s start where two bickering nuclear power plant workers wonder if they should check for any leaks or leave work on time and avoid the inevitable politics involved with their superiors if they stay longer.   Unfortunately, they choose the latter.

Lo and behold, a leak just happens to make its way to a local pond and, through the windows of a school bus, a thick fog of radioactive waste blasts the titular heroes.  Their deserted school bus is later discovered by a Sheriff Hart (Gil Rogers) who does his best to alert the children’s parents, but inexplicably some of the mothers don’t appear to be the slightest bit concerned for their offspring’s welfare who are very late in getting home from school. One parent even makes the ludicrous suggestions that the Sheriff is after her nine year-old daughter while her buff husband works out just a few feet away.  Is this what they mean by the nuclear family?  Sorry…

The film, which possesses creepiness in a vein similar to Bob Clark’s Children Shouldn’t Play with Dead Things (1972), doesn’t concern itself with larger issues, such as do the children have thoughts or do they “know” anything, or are they just somnambulant zombies.  It is determined that in order to stop them, one must cut their hands!  In Night of the Living Dead, they had to shoot the zombies in the head.  There are some scenes of the children being shot and killed and, aside from Assault on Precinct 13 (1976) and Who Can Kill a Child? (1976), shooting kids dead is a rarity in cinema.  The ending is straight out of The Brood. 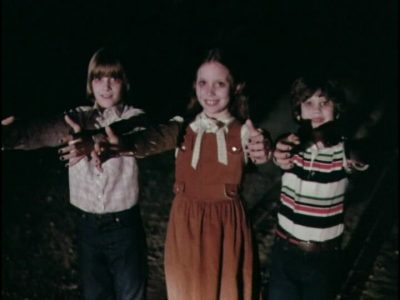 While clearly a low-budget production, The Children benefits from a highly effective and creepy score from film composer Harry Manfredini who also wrote the inimitable music to Sean Cunningham’s smash hit Friday the 13th which opened two months prior to The Children.  Much of that music is used here.  A similar situation occurred with the Canadian films Prom Night (1980) and Curtains (1983) when composer Paul Zaza’s music appeared in both.

The now out-of-print DVD is a nice little package, however a theatrical print was used for the transfer and the head and tail of each reel is speckled with the requisite scratches, lines, and circular shapes that indicate to projectionists that it’s time for a reel change.  Until the original negatives, or at the very least an interpositive, are secured and the film is released on Blu-ray through Lionsgate’s Vestron Video line, this DVD will have to do. 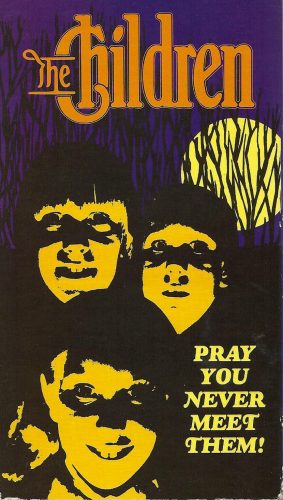 There are some nifty extras here, including an audio commentary by the film’s producer Carlton J. Albright.  It’s a fairly muddled affair however and is plagued by technical glitches.  Often the audio just drops out completely.  Mr. Albright provides some interesting info, however he is far from loquacious in his recollections and often there are dead spots.  He sits too far from the mike and one finds themselves straining to hear his comments.

There are also some on-screen interviews with Mr. Albright and some of the behind-the-scenes people.  The most bizarre extra, though, has to be excerpts of a musical version that someone staged at New York University some years back!  I would have liked to have seen interviews with the actors who actually played the children and what their thoughts were.

Track those people down!