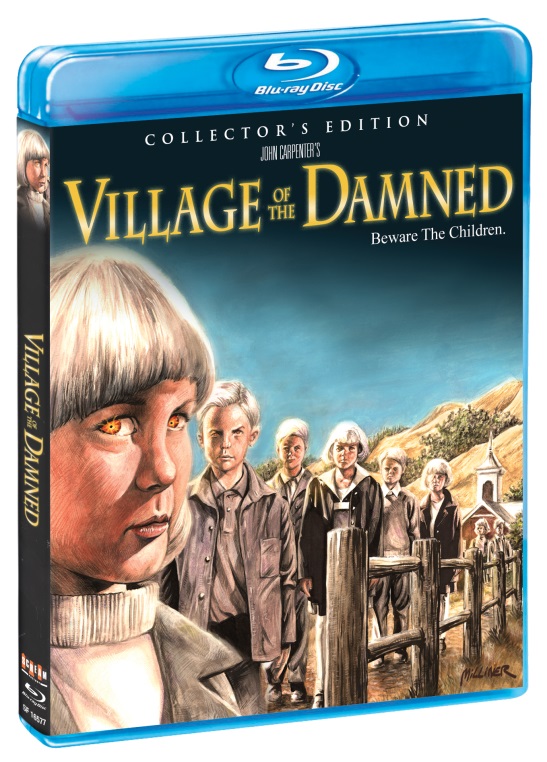 A small town’s women give birth to unfriendly alien children posing as humans.

John Carpenter was, is, and always will be one of cinema’s greatest auteurs of horror and sci-fi. If you take the time to look over his resume, the hits far out-weigh the misses. In fact, I wouldn’t say he actually has any misses, maybe they should be considered lackluster as opposed to misses. We all know which films are considered by most of us as classics but films like ESCAPE FROM L.A., MEMOIRS OF AN INVISIBLE MAN, and VILLAGE OF THE DAMNED are films I consider to be on the lower end of the spectrum. ESCAPE is great but it’s essentially just a remake with horrible CGI. MEMOIRS just never works and I felt Chevy Chase was miscast. Now VILLAGE is the interesting one. It has a truly unique cast, a couple of gruesome deaths, so it was a bit shocking to realize the film falls short on several fronts. One reason this may be true was Carpenter’s lack of passion for the project. He himself has admitted VILLAGE OF THE DAMNED was a contractual obligation and it shows.

In the small coastal town of Midwich, something very mysterious happens. While preparing for an annual village event, a blackout occurs. Every living thing in the town passes out. Hours later when everyone awakens, they discover the military was called in to help. Everything appears to be back to normal until a couple of weeks later when all of the women in town learn they are pregnant, even the ones who were not sexually active. This causes friction among the towns people since this is happening to everyone at the exact same time.

The government steps in to offer the families money as long as they can monitor and test the children to make sure they’re alright. When it’s time to give birth, all the children are healthy. As they grow older, their intelligence is off the charts and they all sport the same blonde hair. These children are all completely emotionless and have psychic abilities, abilities they begin to use for evil purposes. The parents are all torn between the unconditional love of their children and the fact that these children may not be 100% human.

My favorite thing about VILLAGE is the score by Carpenter and Dave Davies. It has an eerie almost Goblin-esque quality to it. The cast was pretty bizarre for a Carpenter film. It featured Mark Hamill as a priest, Michael Pare, Meredith Salenger, Linda Kozlowski, Kirstie Alley, and the late Christopher Reeve in what I believe was his last role before the horse riding accident that left him paralized and wheelchair bound. They’re all pretty fantastic, especially Reeve who brings respect and an unlikely hero quality to his character. The film also features a very young Thomas Dekker who has gone on to be a solid and entertaining performer as an adult in projects like THE SARAH CONNER CHRONICLES and KA-BOOM. The film produced a couple of grizzly effects but it’s no where near as bloody or violent as some of Carpenter’s other projects. 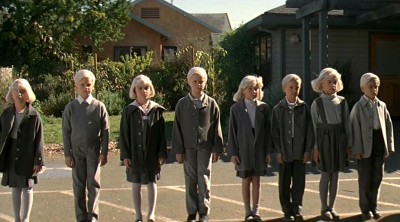 I think the main issue with the film lies within the script. It was a remake of the 1960 film which itself was based on the book THE MIDWICH CUCKOOS by John Wyndham. The script was a bit disjointed and the purpose of certain characters was unclear. This was clearly an example of a director being a hired gun. Aside from the score, nothing in this film screams that it’s a John Carpenter film. VILLAGE was nothing more than an opportunity for him to work with a few good actors and bring home a paycheck.

There’s nothing wrong with doing that, it’s just we expected more from him. The most interesting aspect of the story comes at the end with Dekker’s character being the only child survivor. I would have much rather seen a film that would explore his character’s plights after being separated from the rest of the alien bred children and how he dealt with it. This is a mediocre film but Carpenter has nothing to worry about, his legacy remains in tact. *** (out of 5)