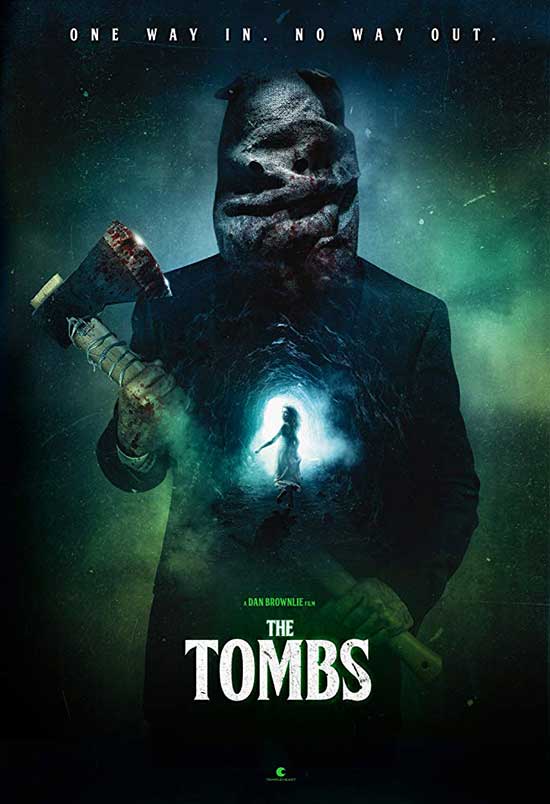 A live streamed, publicity stunt, filmed inside London’s most famous scare attraction takes a terrifying turn as the event awakes an evil spirit. Something relentless and seemingly unstoppable starts stalking the celebrity guests through the claustrophobic halls of this maze of terror.

Did you ever have a friend or an acquaintance who ALWAYS tries too hard to fit in with the group or make friends or just to get attention? You get all that forced and overplayed excitement or enthusiasm or concern, and it wears on your nerves until you just want to scream, “Shut UP!!”

Welcome to “The Tombs”.

The film begins with an overly-cheerful announcer trying to boost the shouts and screams of the stunning 10+ people who are supposed to be a wild throng of people waiting for a celebrity-filled spook-house attraction’s premiere on live stream.  The camera keeps showing the meager number of “raving” fans as if it will multiply in your brain. It does not, and you can’t help but wonder if the rest of the film will be as aggressively underwhelming as the hype-filled introduction.

Inside the spook house proper, everything is falling apart, as usual for this set up. Cast members are not on their marks. The live-stream cameras are shorting out. Celebrities are running late, and the ones present are clueless.

Two crew members attempt to fix the issue with the cameras through the entire length of the attraction. After one of them cuts his hand, his blood brings the spirit of a necromancer to life, and it inhabits a masked figure prop wielding an axe.

You can guess the rest of the “plot” which plays out like a checklist of clichés that aren’t even fun to laugh at anymore – the cast gets reduced by ones and twos as they wander through a spook house that looks as if it were built by the kids from The Little Rascals.

No. Sorry. The Little Rascal shorts probably had larger budgets.

The thing that pushes “The Tombs” beyond being merely dull and derivative is its annoyingly aggressive presentation. The hostess isn’t perky; she’s SUPER EXCITED PERKY. The obnoxious celebrities who will be the body count aren’t jerks; they ‘re EYE-ROLLINGLY BITCHY JERKS. Problems aren’t troublesome; they’re ARM-FLINGINGLY, FOOT-STOMPINGLY TROUBLESOME. You get the idea.

If the hyper quality accomplished something other making the actors use their characters to bludgeon the audience, it might work. As is, it is anxiety-inducing twaddle about characters whom you passionately pray meet gory, pain-filled deaths. Unfortunately, you do not even get THAT satisfaction as most killings take place off camera. The few makeup/blood effects offered are poorly shot and lit, so it becomes a further waste of time.

Okay. The bulk of the film is a Dumpster fire. Isn’t that enough?

You suffer through the obnoxious presentation of the material. You force yourself to tolerate overblown acting and unrealistic characters. You wince at every cheap attempt to make the camerawork seem edgy through questionable editing. They can, at the very least, give you a reasonable resolution to the whole thing.

Forget it. The audience is handed the “rules” to resolve the film: 1. Find the necromancer’s skull; 2. Destroy the skull before the necromancer finds a new host. Fair enough – if they had stuck to it. “Ooh, we’re too edgy to play by the rules,” seems to be the attitude, so the audience is lied to after watching 70+ minutes of frustration. What then passes for an ending is just a justification for a sequel if enough money is generated by this film. A fervent prayer for that to never happens is offered.

If “The Tombs” had opted to be merely lame, it could perhaps be viewed in a somewhat kinder light as just a low-budget time-waster. Instead, the filmmakers made the choice to be more “in your face” than a 3D movie from the 1980s in a failed attempt to cover up bad acting, inept storytelling, and a cheat ending like a crack-addicted cat burying its own foul feces. You can try to watch “The Tombs” hoping it will be so bad that it is funny, but the damned movie will just disappoint you again.