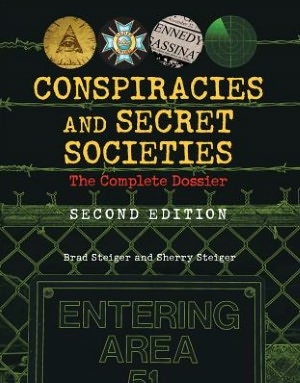 I love to come across books with great value. When I say that, I’m referring to nicely sized volumes containing oodles of research, chapters and sections that are easy to read and a wealth of knowledge passed down by the authors motivation and sheer zest for collecting information. Brad and Sherry Steiger have done so in there book titled “Conspiracies and secret societies”. As a reviewer I’m just coming off of his more recent release of “Real Vampires, Night Stalkers and Creatures from the Dark side” another excellent volume.

Though for practical purposes, this one was the one to catch my eye due to the current state of affairs we live in. It goes without saying that we are in a rather paranoid time with lots of questions and many unanswered. Prior to 2009 we touched upon conspiracy theories and talks of men in black but stayed pretty standoffish in our comfort with ignorance. When things change, folks become curious. This curiosity is spelled out in several different means within the book. What are the truths behind the X-files, the Illuminati, the Catholics, the Freemasons and several others? Why should we care? I think a smart person would look at the facts and put pieces together from histories earliest times up to where we are now. Every year we flock to theatres to fill that curiosity with more tales of legend. However, what if many of that was actually based on truth rather than fiction. Brad ends his back cover synopsis with the simple “draw your own conclusions”.

This is because the powers that be have fine tuned fact and fiction to a science that confuses even the hardest of researchers. In the end, we really don’t know but several authors claim to have uncovered the reality. And yet we pass by these books all the time that may hold the answers we seek. There is alot to dig into this book and it’s done so in a comfortable way. We can skip right to the truth about X-files or flip back to the secrecy of Illuminati. I have in my library several books that focus on conspiracy or secret societies. What I’ve found is that while they are very in depth, they can also get laborious for those looking to just get the basic facts and move along.

Steiger lays out his book really well with numerous small sections that give you the quick and dirty things you’d want to know about the controversial subject matters. The “Ark of the covenant” explains how this piece was created, what it contains and where its traveled over the years. According to myth it contains the power to destroy the world and therefore has been kept in secrecy and heavily guarded. Rightfully so, if you ask me!

Various cults and sects that have sprung up or maintained over the years are disclosed. I found it funny that a few were obvious means for the leader to prosper and take advantage o young women under the guise of supremacy. In fact reading, you may ask yourself the questions, that we all respond with….how could they be so naive?

The Church of Satan is summarized into a few paragraphs that essentially gives you the overview you might otherwise feel uncompelled to seek out on your own. Its rise to media and fall to secretive underground gatherings. The body count of “Clinton” deserves a careful eye to with its short list of the 100 or so deaths that have occurred under his presidency run. I had heard rumors but this report may be one of the more important in the book which spells out the lengths and depth of “potential” government corruption. “HAARP” as an isolated subject stems all the way back to the days of Tesla.

What secrets about audio annihilation is the military hiding from us and do we hold the most destructive forces known to man? Haarp continues its secrecy and research even as we speak. Not enough you say?…how bout the details behind Princess Diana, the Templar Knights, UFO’s, Area 51, The New World order……and well that’s just getting started. Religionist sects and orders which seem to also share there weigh of controversy might better be understood within these pages. Jack the Ripper, Howard Hughes, inoculation fear, or maybe the Assassination of J.F.K….and plenty more where that came from

Each page within is as equally compelling as the next. Readers who want to really learn a little about alot will not be able to put this down. Just about every odd, secretive and intellectually indulging subject is proposed and explained with the great writing style that the Steigers have used so well in other additions. So far in the scope of conspiracy and secretive societies published works goes, this has to be my favorite. Definitely worth the price of admission!