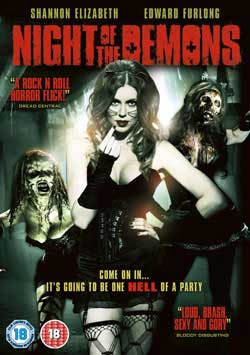 A group of kids go to a Halloween party, only to have to face down a group of demons.

With a cast like this :Diora Baird, Shannon Elizabeth, Monica Keena, Bobbi Sue Luther, Jonathan Beach, Michael Copon, Tiffany Shepis and Edward Furlong ……yunno it’s gonna be something special! At long last, the long awaited Adam Gierasch remake of the 1988 Night of The Demons arrives and with killer results. I still remember the advert for the original with its campy and chilling style of film “your invited to my Party, Angela”. Though it was that shocking demon cover that really sold the ad. In the wake of remakes, its good when they pick one that’s deserving of a remake and needs a modern facelift. “Night of the Demons – 2009” is that such film. Horror fans will revel in the fact that director Gierasch has pulled out all the stops creating camp, scary, gory, and chilling all in one. Those nasty demons are back, with plenty of creepy makeup transformations in the vein of the 1988 version but of course enhanced with a some fantastic results. 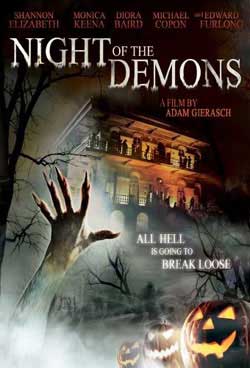 For newcomers to the movie, the premise is simple. Angela is throwing a party at a rented old house known as the “Broussard Mansion” that is rumored to have been involved with evil events in the past leaving several of its visiting occupants dead. The original owner Evangeline Broussard hung herself which left her decapitated. The original tale is told quite well in sepia toned projector style that reveals a bit of what’s to come.

Angela, a resident party girl promises a killer Halloween bash tainted with a touch of the old legend. The party is a hit and her partner Diana (Tiffany Shepis) attends to the admission taking. Though I will say I was surprised that Shepis was only given a short supporting role in the film.

The party scenes are shot with that hip…. fast, slow down, fast, slow down… style that reminds me a bit of the Tony Scott technique, though they are perfectly fitting to show the dynamics of the party. Well, just when all is going well, the gig is busted by the police leaving a choice few behind to cleanup the mess and get themselves into more trouble. This is when by accident they discover the original bodies of the missing occupants from the past in a hidden room. The bodies are arranged in ritual style fashion totaling 7. To add to the drama, the mansion is locked, communication is out and they are in for the night to endure what comes at them. From here on in it’s safe to say that demons become awakened, blood starts to spill and many of them are victim to possession. The incentive is to stay alive or keep from being possessed until the day comes which renders the curse inactive.

Its alot of fun and tries to do homage a bit to the original film by keeping in key moments. This round is much more filled with the kind of horror madness that modern audiences expect and yet is played out with a unique combination of old school stylings as well.

One of our favorites from the original Linnea Quigley makes a cool cameo reprising her ballerina scene. Shannon Elizabeth as Angela Feld shines as a perfect party going, extremist and Halloween hostess in this dynamic over the top role for her. Actually you’ll soon forget about the 80’s Angela and welcome Elizabeth’s performance as the new reigning demons queen. Edward Furlong plays the drug user / pusher Colin who has moments where the Edward we know shines thru but on the most part appear sluggish and somewhat bored in his own skin. Though in this case, it doesn’t slow the film any as the cast does a really bang up job of doing the original story justice. With that, we get the famous lipstick thru boob scene with some shocking gory additions. And on that note, it should be pointed out that there is plenty of nasty gore, blood and shock moments that still retain that campiness that we are used to.

Its a perfect marriage of all the elements really making this one of the most exciting remakes I’ve seen in quite some time. Whether this style of film is your personal cup of tea, I’m calling easily one of the best horror films this year. It’s plenty of fun and hope you’ll dig it.